My Israeli Nemesis is Moving to America 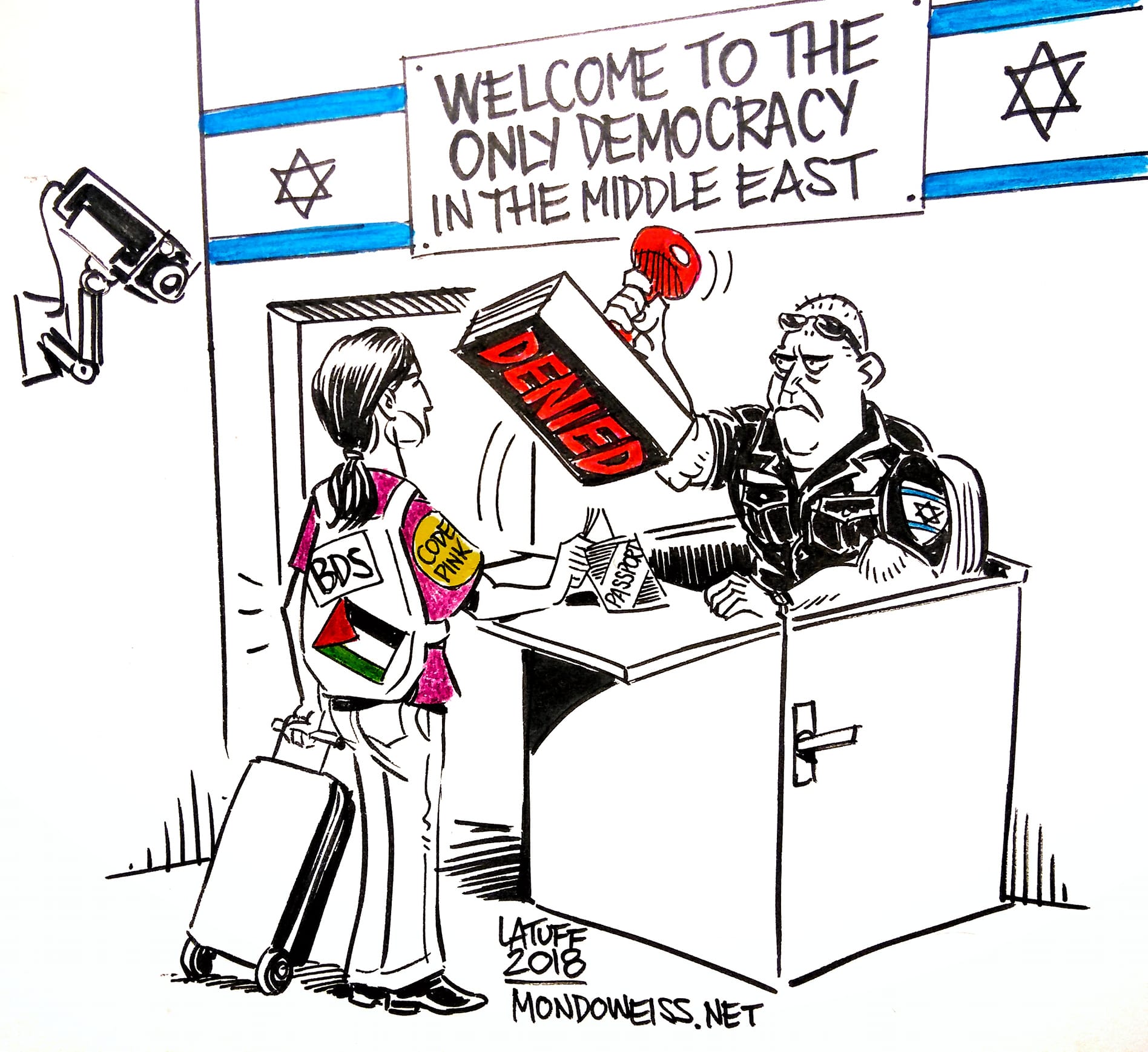 My first run in with Israeli politician Gilad Erdan took place on July 1, 2018, when I arrived at Ben Gurion airport in Tel Aviv, passport and visa in hand. After seven hours of interrogation, I was told that Erdan had had my visa revoked and was sending me directly back to the U.S. “We prevented Ariel Gold, an extreme boycott activist, from entering the country,” he pompously tweeted. 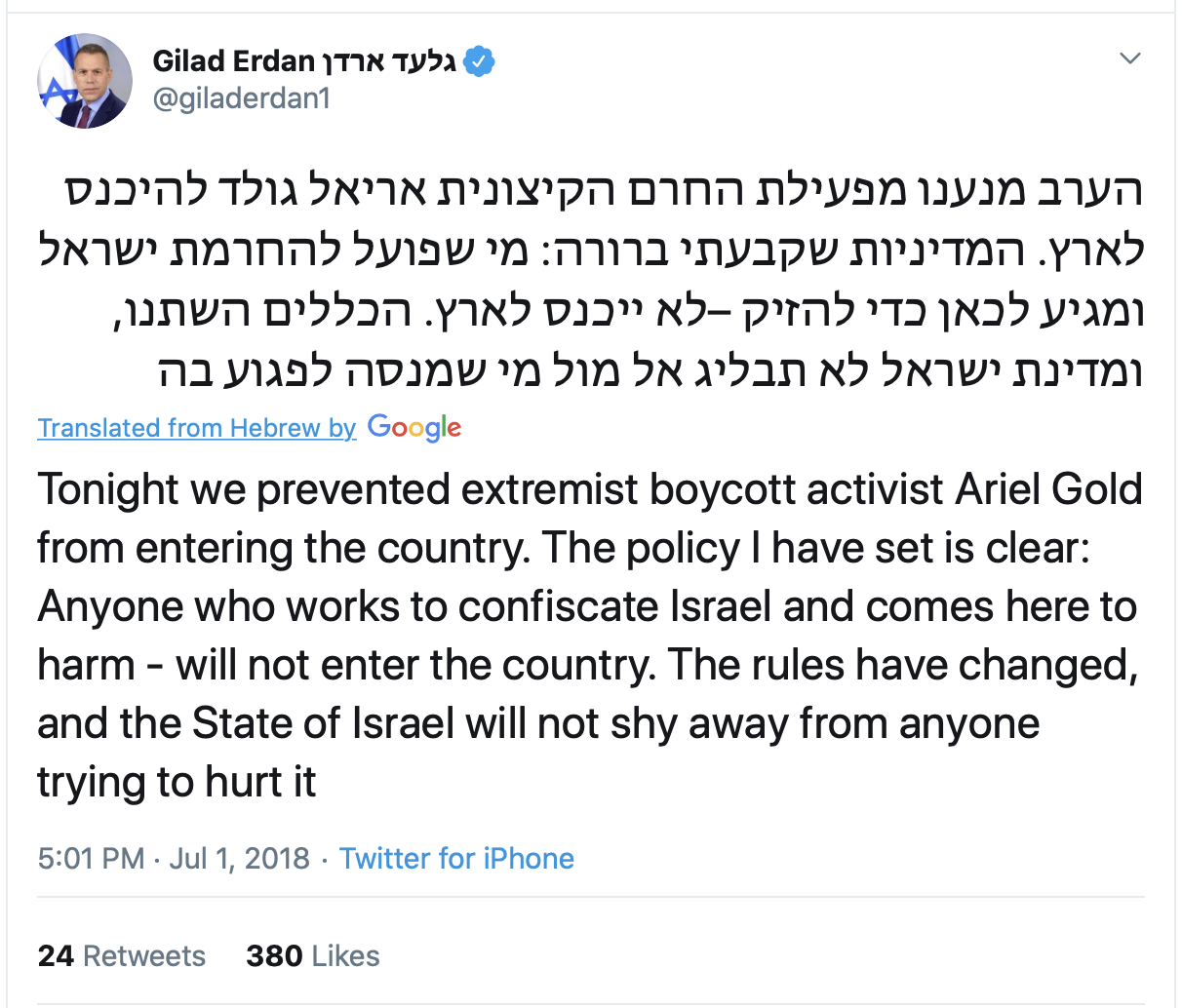 Now my nemesis is moving to America. On Monday May 11, Erdan was appointed by Netanyahu to become the next ambassador to both the United States and United Nations.

To be fair, I am far from the first or most important person to be denied entry to Israel by Gilad Erdan. Erdan led the charge to deport Human Rights Watch’s Omar Shakir was the same politician denied entry to Representatives Rashida Tlaib and Ilhan Omar in August 2019. Still, back in 2018, he found the time to publicize his gripe against me. “Gold distributed videos on social networks, in which she harasses IDF soldiers and Border Police officers in Hebron, accusing the soldiers of apartheid and oppression, and that their actions do not conform to Jewish values,” he told the media.

It seems ridiculous that a country that heralds itself as the “only democracy in the Middle East” would feel threatened by a grassroots peace activist like me. But creating a more repressive Israeli state is exactly what Erdan has built his career on. As Erdan is about to become Netanyahu’s right-hand man in the U.S, it is important to understand where he comes from and what is on his agenda.

Erdan entered politics in the 1990’s as an advisor first to a younger Netanyahu and then to then Knesset member Ariel Sharon, who is notorious for the role he played in the 1982 massacre of thousands of civilians in Lebanon’s Sabra and Shatilla refugee camps.

Erdan joined Israel’s Knesset in 2003, placing third in the Likud primaries of 2008. As a member of Israel’s parliament, Erdan was a huge proponent of strengthening Israel’s alliance with the Christian Evangelical movement. This was despite the mission of evangelicals to return all Jews to Israel so that armageddon can take place once Jews either convert to Christianity or burn up in a ball of fire. Erdan, it seems, has no problems with the antisemitic statements made by such evangelical leaders as John Hagee of Christians United for Israel—the largest pro-Israel lobby organization in the U.S. In the 1990’s, Hagee referred to Hitler as a “hunter,” sent by God, to expedite God’s will of establishing a modern day Jewish state in Palestine. In his 2006 book "Jerusalem Countdown: A Prelude To war," Hagee accused the Jews of causing the Holocaust through Jewish disobedience to God.

In 2015, Netanyahu appointed Erdan to the position of Minister of Public Security, Strategic Affairs, and Information, which he has held until now.

In 2016, Erdan and Israeli Justice Minister Ayelet Shaked came up with the “Facebook Law” enabling Israel to have Facebook and Google remove content deemed to be against the interests of Israel’s national security. In November 2017, he ordered cameras to be installed at the entry and exit of the Al-Aqsa Mosque (thankfully the Palestinian prayer protests forced him to have the cameras removed) and in January 2018, he called for Israel to utilize Trump’s time in power to annex the West Bank settlements. Speaking to a Likud’s Central Committee gathering, he declared, "the time has come to express our Biblical right to the land.” The soon-to-be ambassador to the U.N. also made clear his lack of regard for international law and global opinion, stating that: “we are telling the world that it doesn’t matter what the nations of the world say.”

I began paying closer attention to Erdan in 2017 the Israeli Knesset passed a law, initiated by Erdan, enabling the country bar entry on the grounds of support for the nonviolent Boycott, Divestment, and Sanctions Movement. Erdan announced at this time his intentions to create a database of such people like me.

In December 2018, Knesset approved $72 million for Erdan’s anti-BDS, anti-free speech project. In January 2018, Erdan released a blacklist of 20 organizations, including CODEPINK, now officially banned from entering Israel. Expanding his mission to suppress dissent and freedom of speech, in June 2019, he took credit for the unconstitutional anti-BDS laws being enacted in U.S. states. “Our efforts are producing results. 27 US states now have counter-BDS legislation,” he gloated. “We must encourage investigations of terror-linked BDS groups and promote legislation that counters all forms of anti-Semitism including of course the anti-Semitic delegitimization of Israel,” he continued, calling for even further Israeli interference into U.S. policy.

Erdan won’t be the first Ambassador that I have taken issue with. In July 2016, I interrupted the current Israeli ambassador to the U.S., Ron Demer, as he spoke at a Democratic National Convention event in Philadelphia. In April 2018, I disrupted the current Israeli ambassador to the U.N. Dany Danon as he gave a talk at Syracuse University. You have “blood on your hands,” I told Danon before reminding his audience of the illegality of Israeli settlements.

Erdan will replace Danon as ambassador to the U.N. once he is confirmed by the new Israeli government, sworn in on May 14. He will then reside in New York City until he moves to Washington after Ron Dermer vacates his post, likely after the U.S. November elections.

Unfortunately, right now because of the COVID-19 crisis, my CODEPINK colleges and I won’t be able to tell Erdan in person just how unwanted and unwelcome he is in the United States. But mark my words, Erdan: In time, as you settle into NYC and then D.C., you will experience first hand, and in bright pink, the commitment that American activists have to free speech, democracy, freedom, justice, and equality for Palestinians.