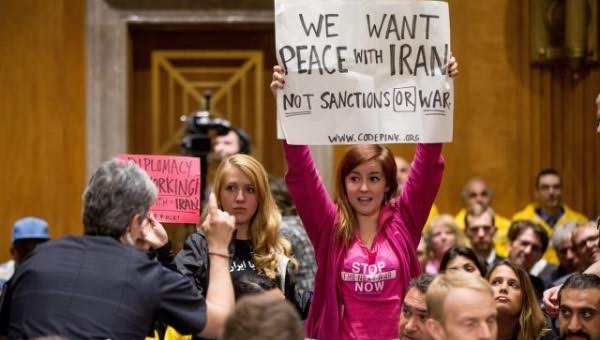 A nuclear deal with Iran could be a game changer for US foreign policy and for the Middle East. The P5+1 (the U.S., China, Russia, France and the United Kingdom, plus Germany) and Iran have been developing a comprehensive agreement that would freeze Iran’s ability to create a nuclear weapon and start the process of sanctions relief.

If it succeeds, this deal would dramatically decrease the probability of another costly war in the Middle East and could usher in an historic rapprochement between the US and Iran after 34 years of hostilities. US-Iranian collaboration against extremist groups from ISIL to Al Qaeda could help damp down the fires raging across the Middle East.

Key US allies, Israel and Saudi Arabia, oppose the deal. Both nations harbor long-standing hostilities toward Iran and both want to preserve their preferential relationship with the US. But the American people, frustrated by over a decade of US involvement in Middle East wars, support the initiative. A recent Washington Post/ABC News poll shows that 6 in 10 Americans support a plan to lift international economic sanctions against Iran in exchange for limits on its nuclear program.

Democrats back the agreement by an overwhelming majority of five to one, but even a plurality of Republican voters support the Iran nuclear deal. Why, then, will there be such a tough battle in Congress to approve a deal that the Obama administration has worked so hard to achieve and is supported by most Americans?

Some Republicans have a knee-jerk reaction to anything the Obama administration puts forth. And certain Republican and Democrat Congress members fundamentally distrust Iran, believe it is sponsoring militant groups like Hamas and Hezbollah, and think a deal will strengthen Iran to the detriment of Israel.

But the most compelling reason that so many elected officials will oppose the deal is the power of lobby groups and think tanks, backed by hawkish billionaires who are determined to quash a deal they see as bad for Israel.

Little known to the public, here are some of the groups:

United Against Nuclear Iran: Founded in 2008, UANI boasts a bipartisan powerhouse advisory board of former politicians, intelligence officials and policy experts. Cofounders Richard Holbrooke and Dennis Ross, and its president Gary Samore, have all worked in Obama’s White House.    In June, UANI announced a multimillion-dollar TV, print, radio, and digital campaign with the message that “America Can’t Trust Iran, Concessions have gone too far.” Mark Wallace, UANI’s chairman and George Bush’s US ambassador to the UN, said, “We have a multi-million-dollar budget and we are in it for the long haul. Money continues to pour in.”

Secure America Now: Founded in 2011 by pollsters John McLaughlin and Pat Cadell, it is linked to right-wing pro-Israel factions in the US and abroad. The Advisory Board includes Col. Richard Kemp, who denounces the “global conspiracy of propaganda aimed at the total de-legitimization of the state of Israel” and former UN Ambassador John Bolton, who insists that “the biggest threat to our national security is sitting in the White House.”

The group labels Iran “the world’s largest sponsor of terrorism” and recently launched its own $1 million ad campaign against the nuclear deal. One ad features an American woman saying her father was killed by an IED in Iraq, followed by a menacing voice claiming “Iran has single-handedly supplied thousands of IEDs that have killed or maimed America’s troops overseas. Today, negotiators are pushing for a nuclear deal with Iran that would give them access to nuclear weapons.” It tells Americans to call their Senators and “speak out against a bad deal.”

Foundation for the Defense of Democracies: Founded just after the 9/11 attacks, this neoconservative think tank pushes for an aggressive military response in the Middle East and also follows a hawkish pro-Israel line. It advocates for crippling sanctions on Iran, including medicines, as a way to cause domestic hardship and internal turmoil and its experts are leading advocates for a US military strike on Iran.

American Security Initiative: This is a new group, also bipartisan, formed in 2015 by three former senators: Norm Coleman, Evan Bayh and Saxby Chambliss. In 2014 Norm Coleman, a Republican from Minnesota, became a registered lobbyist for the repressive Saudi regime, providing the Saudis with legal services on issues including “policy developments involving Iran.”

Its first campaign was a successful effort to pass the Corker-Menendez bill, which forces President Obama to submit the agreement to Congress before signing it. In March, the group launched a $1.4 million ad campaign aimed at Senator Schumer and other key senators with the message that the deal (which had not even been released) is “great for Iran, and dangerous for us.” One over-the-top, fear-mongering ad showed a suicide-bombing truck driver in an American city detonating a nuclear bomb, apparently on behalf of Iran. The message, albeit a crazy one, is that if Iran is allowed to get a nuclear weapon, it will attack the US.

AIPAC: The American Israel Public Affairs Committee is the largest pro-Israel lobby group. AIPAC, too, has been pushing sanctions and opposing the nuclear deal. It claims that Iran is the world’s leading state sponsor of terror and is racing toward a nuclear weapons capability. AIPAC spends millions of dollars lobbying but its real financial clout lies with the pro-Israel Political Action Committees (PACs) it is tied to.

In addition to lobbying against a deal in Washington, over the past several years AIPAC has also been promoting state-level bills mandating divestment of public funds from foreign companies doing business with Iran.

Dozens of states have passed such bills, and many are likely to stay in place even after a nuclear deal, complicating the federal sanctions relief that is a key element of the negotiations.

What is the source of the millions of dollars now being poured into the effort to squash the nuclear deal? Most comes from a handful of super-wealthy individuals. Home Depot founder Bernard Marcus gave over $10 million to the Foundation for the Defense of Democracies. Other multimillion donors are hedge fund billionaire and Jewish Institute for National Security Affairs board member Paul Singer, and Charles Bronfman of the Seagram liquor empire and board chair of Koor Industries, one of Israel’s largest investment holding companies.

The largest donor is Sheldon Adelson, a casino and business magnate who contributed almost $100 million to conservative candidates in the 2012 presidential campaign, outspending any other individual or organization. He publicly advocated for the Obama administration to bomb Iran. Peter Beinart, a contributing editor at The Atlantic, said “Every Republican politician knows that Adelson conditions his checks on their Iran vote.”

Congress has 30 days from the day the deal is introduced to vote in support or opposition (or 60 days if the negotiations are delayed). To block the deal, Congress needs a veto-proof majority, which is precisely what these groups and individuals are attempting to buy.

“I’ve been around this town for about 30 years now and I’ve never seen foreign policy debate that is being so profoundly affected by the movement of hundreds of millions of dollars in the American political system,” said former six-term Congressman Jim Slattery.

Congresspeople face a dilemma: they fear a backlash by the billionaires if they vote for the deal, but most of their constituents support the deal. The pathetic irony is that the democratic move of giving Congress a say in the Iran deal (instead of leaving the administration with the authority to seal the agreement), the billionaires have a better shot at drowning out the voices of the American people.

Medea Benjamin is the co-founder of he peace group CODEPINK and the human rights organization Global Exchange. She is the author of 8 books including Drone Warfare: Killing by Remote Control.