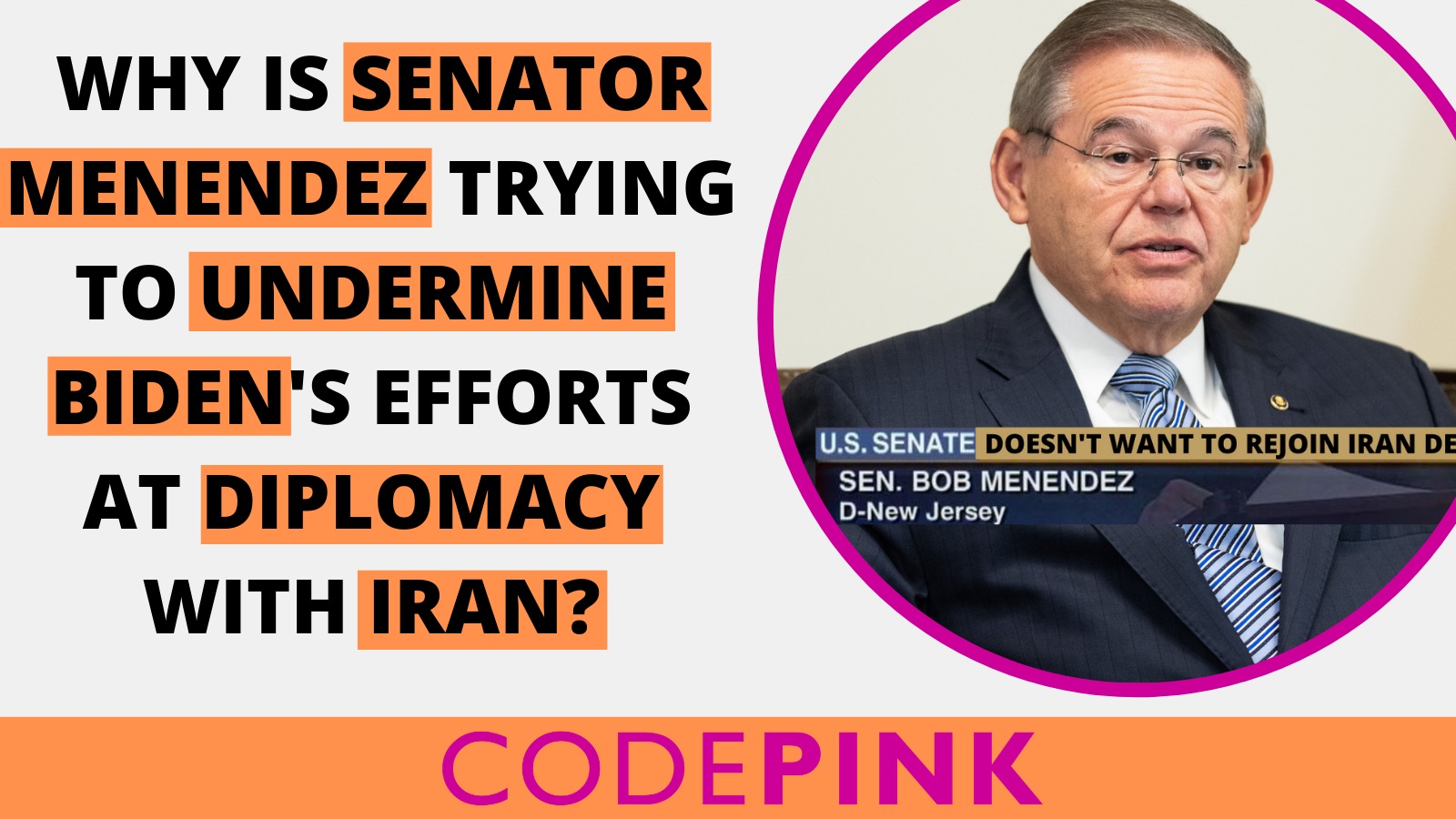 A handful of Democratic Senators — Menendez, Manchin, Sinema, Kelly — have been joining with Republicans to undermine Biden’s attempts to reenter the JCPOA. It’s disgraceful and dangerous. Senator Menedez is in a particularly influential position as he is chair of the Senate Foreign Affairs Committee. Please sign the petition to Senator Menendez below.

We, the undersigned, ask you to support U.S. diplomacy with Iran and the intentions of the Biden administration and Democratic party to reenter the JCPOA.

Make no mistake: Trump’s campaign of maximum pressure on Iran was a maximum failure. It resulted in enormous suffering for the Iranian people and Iran increasing its nuclear capacity, and it almost caused a new U.S-Middle East war.

In March 2021, you joined with Republican hawk Lindsey Graham to urge President Biden to continue down Trump’s cruel path of sanctions until an agreement with Iran can be reached that would go far beyond the original deal. Let’s be clear: such an agreement will never be reached and without the U.S. re-entry to the deal, a U.S.-Iran war could easily break out.

A new, more comprehensive agreement with Iran will not be reached by the Biden administration without the U.S. first reentering the original deal we agreed to. Every day that the Biden administration continues Trump’s policy of sanctions, hoping for a new, more comprehensive deal, will cause increased suffering for Iranians and could easily result in a war breaking out.

Since Trump pulled out of the deal, the Iranian people have been suffering terribly under U.S. sanctions. Due to sanctions, essential provisions like food, housing, and medicine have become price prohibitive and/or more difficult to find. Countless Iranians have died because Iran has not been able to import life-saving medicines and medical equipment, including those necessary to address the COVID-19 crisis.

As the 2020 Democratic Party platform stated: “We believe the Joint Comprehensive Plan of Action (JCPOA) remains the best means to verifiably cut off all of Iran’s pathways to a nuclear bomb. The Trump Administration’s unilateral withdrawal from the JCPOA isolated us from our allies and opened the door for Iran to resume its march toward a nuclear weapons capacity that the JCPOA had stopped. That’s why returning to mutual compliance with the agreement is so urgent.”

European allies are trying to broker a compliance-for-compliance phased approach between the U.S. and Iran. U.S. Envoy to Iran Robert Malley said that the U.S. is ready to engage in a serious diplomatic process, and a senior State Department official said that “possible U.S. steps with regard to sanctions [relief] can be on the table.” The head of the Atomic Energy Association of Iran, Ali Akbar Salehi, said in a PBS interview that the ball is in the U.S.’s court and that Iran will return to compliance as soon as the U.S. takes action.

We know that the JCPOA is the opening of a conversation, not the end of it. By restarting this conversation, the U.S. will better be able to tackle many other concerning policies of the Iranian government through diplomacy. Trump’s policy of “maximum pressure” was always a way to justify the collective punishment of ordinary people in Iran for the actions of their government, a particularly cruel policy given the public’s limited ability to truly change their government’s policies. By calling for a “comprehensive approach to Iran,” you are effectively supporting Trump’s failed policy, as the only path to further diplomacy with Iran starts with a return to the JCPOA.