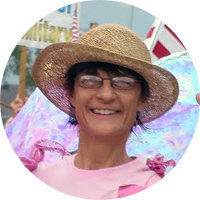 Tucson, AZ: A longtime CODEPINKer, Mary is enmeshed in a network of peace, social-justice, and environmental groups in Tucson. Mary begins her profile statement with: “I have been so very proud of Medea's [Benjamin] tireless efforts on behalf of peace & social justice.”

Mary believes we strengthen our fraying social fabric by connecting on a person-to-person level, and feels lucky to have so many talented and committed activists in the Old Pueblo! Mary was also deeply involved in the Occupy movement.

In 2012 at the military recruiting station in Tucson, Mary and her allies would stand in vigil every Wednesday morning, and they were joined by a few flag-waving, war-loving, music-blaring folks who did not approve of people advocating so publicly for peace.  The big pink peace/love sculpture Mary has carried in actions came from CODEPINK sisters in California, via a fellow named Tzadik Greenberg.  It's been at all sorts of rallies, protests, actions, vigils, demonstrations, marches and gatherings - like Mary!