March 16 Day of Solidarity with the Venezuelan People 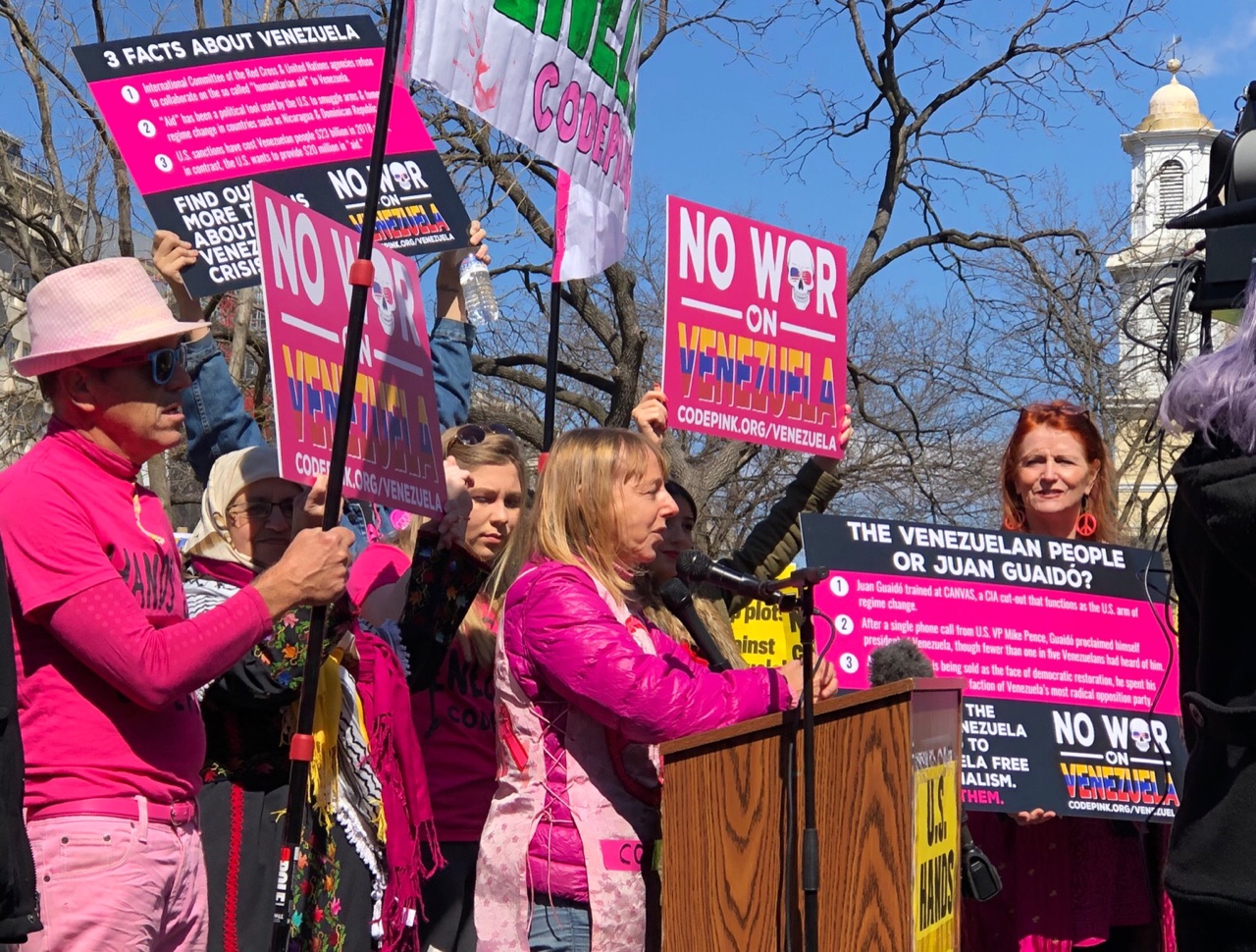 The United States has launched a campaign against Venezuela since its people decided to be free from the imperial rule of the United States. We know that Venezuela is no threat to us. It is a threat to occupying, capitalist forces around the world. It is simply the example of what people can do when they decide that their destiny as a nation is the building of a revolutionary project.

While 45 and co speak on the need for “democracy in Venezuela”, the citizens of the United States experience abuse by a system that is far from democratic and completely violent. The violence of hyper-surveillance, harassment and detention. The violence of not having access to clean water, healthy food, quality education, housing and mental and physical health care. The violence of being dispossessed.

The United States has the highest incarceration rate in the world. 95% of the growth in the incarcerated population since 2000 is the result of an increase in the number of unconvicted defendants, many of whom are just unable to make bail.

So the question must be raised: what does the United States possibly know about democracy? Since 2010, 23 states have passed racist voter suppression laws that represent a barrier (just one of many), to participating in the political process. As a person who grew up in Florida, I know first hand about how the election was stolen to elect war-monger George W Bush in 2000 and how the DNC under Zionist Debbie Wasserman-Schultz rigged the presidential election in 2016 for war-monger Hillary Clinton. 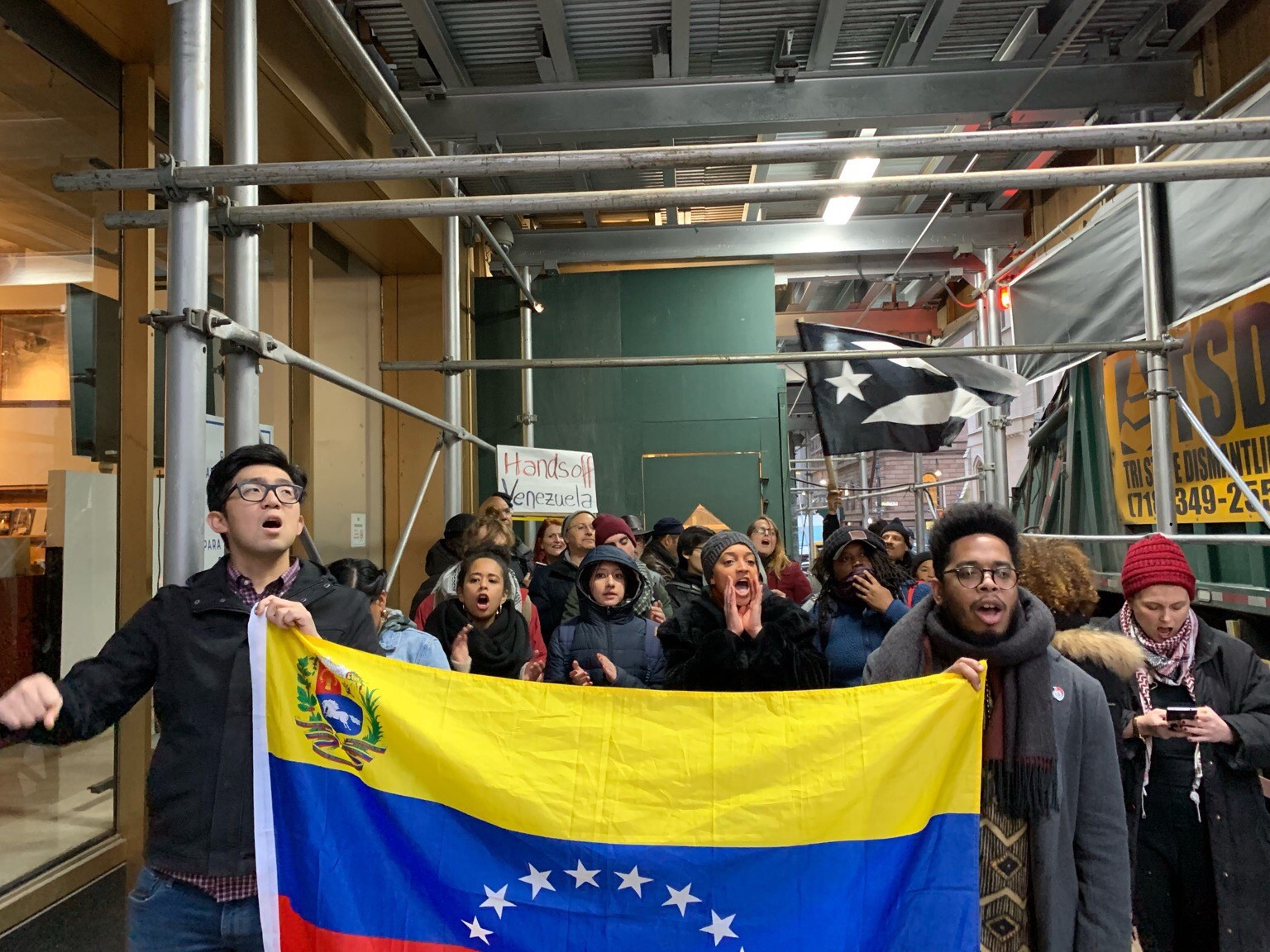 I recently got back from Venezuela and what I experienced in my two weeks there truly astonished me. While the racist, capitalist class declared a humanitarian crisis in Venezuela, all I could think of is the real humanitarian crisis that has been by our people in the United States.

Living in New stork City I see entire families living on the streets. While walking through the epitome of capitalism, Times Square, the other week, I even saw a woman with a cat, books, and a plant with her on the sidewalk. While I did not see homeless people in Venezuela, in the United States homelessness is growing by leaps and bounds. According to the “Souls of Poor Fol” audit by the Poor People’s Campaign: A National Call for a Moral Revival, today there are 64 million people working for less than $15/hr while the top 1 percent’s share of the economy has nearly doubled to more than 20% of our national income. 13.8 million households in this country – face unaffordable water bills and at least 4 million families with children are being exposed to high levels of lead from drinking water and other sources. Thousands have died every year because of some states’ decision to deny Medicaid expansion. More than 250,000 people die in the United States from poverty each year.

We are here to denounce the hypocrisy of the United States government. We are here to say we will not be complicit in the brutality of this imperialist war machine. There will not be another Iraq. We will not allow for the tentacles of capitalism and imperialism, and it’s systems of oppression to invade, rape, pillage and exploit. We will not stand by while the US government strangles the economy of the Venezuelan people, and steals $7billion a year to cause civil unrest in Venezuela as a result of shortages in basic resources, resulting from economic sanctions. 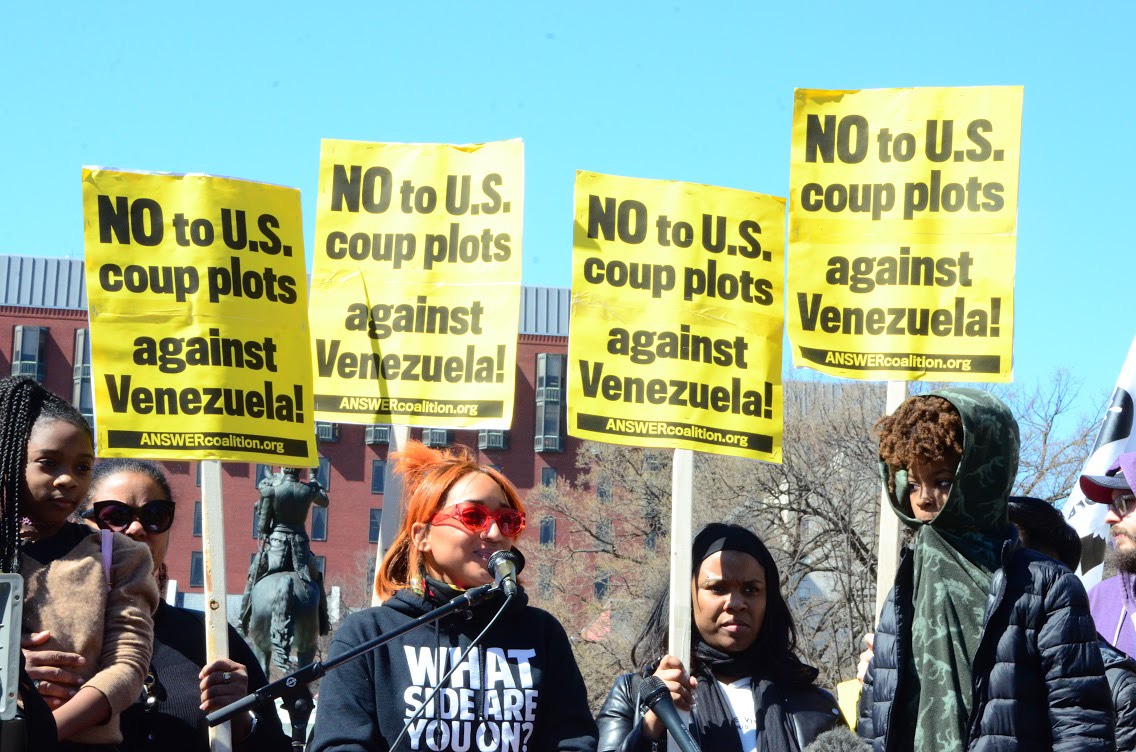 Today, we stand in solidarity with Venezuela and it’s Bolivarian Revolution. Today we defend the people’s right to decide their own destiny without any type of US intervention. Venezuela is an example of the power that we have when we align ourselves with the poor and dispossessed over greed and consumption for the sake of the collective future of our society, our precious earth and our very souls.

The same hell that marginalized and poor communities within the United States “borders” is catching is the same hell the West, (with the support of spineless corporate media and a weaponized Silicon Valley) is doling out to communities around the world. The devastation witnessed in countries like Iraq, the Democratic Republic of the Congo, Puerto Rico, whose only real “crime” is being rich in natural resources and not wanting to have their land and people exploited because of it. These are only a few of the reasons why must say “Hands Off Venezuela.

And, we cannot ever forget Haiti. The first truly free Republic who taught all of us about freedom is still suffering the consequences of daring to liberate themselves from the system of enslavement which fueled the economies of so many imperialist countries in the West. When we say “Hands Off Venezuela” we know that to support democracy in Venezuela also means to support the democratic process in Haiti.

In the building and sustaining of the worker’s political project in Venezuela, they have ensured free education at all levels of engagement of the formal educational process. From the beginning of their educational journey they are supported with free meals, uniforms, textbooks, writing utensils, art supplies and even a cute little backpack. At the university level, they have access to free, public education. Daily transportation from even the most rural areas, textbooks and food. They have enacted free health care, supplemental income for mothers and families, low-income housing that has allowed families to stay IN their communities and access to housing in the city.

The Bolivarian Revolution is a lighthouse of hope for the continent and the world because they know that we know that we don’t need them. It is a reminder and affirmation that the people, the poor and dispossessed of the world are able to organize and build revolutionary projects in our image and for our interest.

We cannot afford to lose Venezuela and our solidarity with the Venezuelan people has the ruling class big mad. The call is to educate, organize and mobilize in our communities, and connect the struggles of our people throughout the world. Let’s leave this place with the commitment to build solidarity at all levels, and continue to denounce and work towards ending the atrocities of this government, at home and abroad.