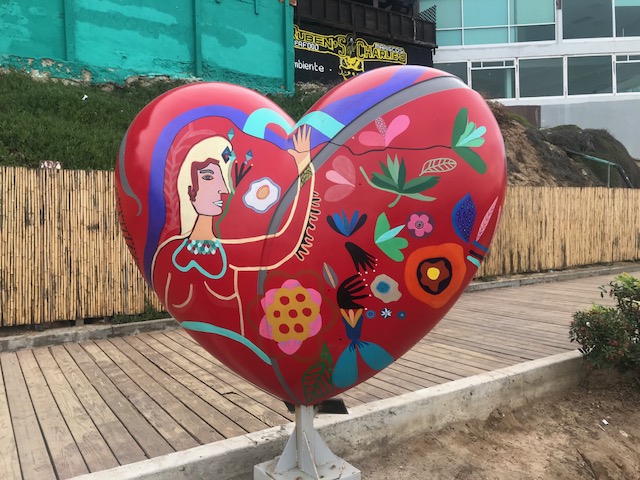 I join the far left of four lanes of a zillion vehicles lined up to leave the promised land and cross into Mexico.

I’m grateful to have a passenger who is fluent in Spanish, a wonderful activist womon Gabriela, whom I found out is also a lawyer! When we are pulled off out of traffic to the side and directed into the lane where we are to be x-rayed, she whispers to me “don’t argue with them,” as she is directed off the truck and to another part of the terminal.

My truck passes through the x-ray machine and the drug-sniffing dog successfully. A young man approaches me and orders me to lift up the back door. I’m like (to myself) you really don’t want me to do that, it’s stuffed full.

When I can only raise it partially, he says no way will I continue into Mexico ordering me to turn around, leave this crossing, re-enter the u.s.ofa. and go to the Otay border crossing, at least 10 miles away. I argue with them. It’s too far away, why should I go stand in line again, why won’t he let me go through?

He tries to tell me I can do it, it’s not that far, when I drop the magic word: Marriott! I tell him I’m staying at the Marriott hotel and that’s only a mile away. I’m old, I’m tired, and I’m here. Besides, I’ve entered Mexico a zillion times and have never been stopped (not true) or directed to yet another post (true).

He can't believe it and short of calling me a liar, shares his disbelief.

He takes in the goods in the back again, shaking his head and telling me I have to leave. He calls Gaby over from the sidewalk where she’s been anxiously peering across the pavement, telling her we're leaving but no way am I ready to give up yet.

It occurs to me he thinks the truck is full of stuff so I bring him around to my side door and show him my camper. I tell him this is my home, it is not full of stuff but only half full. He shines his bright light carefully in around the interior and nods quickly once.

He is impressed so I tell him I built this camper myself (sorry Shazam) and that I live on the road. He is wavering, telling me I’ll have to pay taxes on such things. I ask how much and he shrugs and walks away.

Three seconds later he comes over with his boss, a tall authoritative light-skinned guy, who first again looks at the supplies almost tumbling out the back of my truck. Then he starts to tell me we have to go when the first officer tells him to come look at the camper.

He’s shaking his head, not in a friendly nor impressed manner but conveying his disgust. He orders me to open up the back yet again and all of us try to shove things inside as the door releases its hold on the supplies.

He demands to know about clothes. I already know that the Mexican government doesn’t want clothes trashing up their environment (or being sold by gringas on the streets) so I tell him it’s mostly food with a little games for kids, paper cups and plates, stuff like that as I pray a box of diapers or a bag of clothes doesn’t fall out and hit him in the head.

He glares at me and wants to know how come I have so much food and stuff in my truck. I tell him I just left the Bay Area and I’m embarking on a cross-country trip. Coming to Tijuana was just a fluke, a little part of the bigger picture, as we’re curious about Mexico. Gaby nods enthusiastically right on clue as if we planned it this way.

“Why do you have all this food,” he wants to know, pointing to the five 50 pound bags of rice he can see on one side and the stacks of tomato sauce on the other. I tell him it’s all my personal things. “This is too much food”, he snorts, "for two." I repeat my coming down the coast and heading east story, but this time I add: "We’re having a family reunion in Texas and we have a huge family."

He snorts even more loudly and then tells me he’ll let me in but I have to pay taxes. Taxes? I repeat. Why?” At the same time Gabriela asks “how much?”

“One hundred,” he says. I ask if that’s pesos or u.s. dollars as Gaby begins to reach inside her purse. "u.s. dollars," he says.

“That’s too much for me,” I plead, thinking of everything I will need and how much money I'll have to spend. tell him as I calculate the math in my head. “Will you do $50?”

"Alright," he grumbles as he stalks off. I hope my triumphant relief and grinning pleasure is not showing too much on my face. The first guy scribbles something on a piece of paper that he rips off the pad and hands to me, directing us across several lanes of moving vehicles to the building across the way where people are entering the border on foot.

We take the paper and rush off to pay before any more charges are leveled. Then we’re back, stamped and with a lighter purse but off into Mexico!