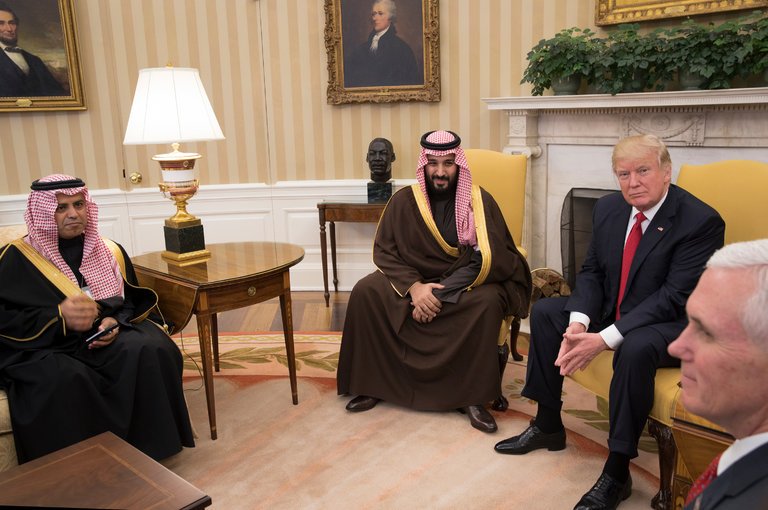 On May 2, 2017, before becoming Saudi Arabia’s Crown Prince, Mohammed bin Salman, as Minister of Defense, spoke about the Saudi-led coalition’s war in Yemen, a war he orchestrated since March of 2015. “A long war is in our interest,” he said, explaining that the Houthi rebels would eventually run out of cash, lack external supplies and break apart.  Conversely, the Saudis could count on a steady flow of cash and weapons. “Time is on our side,” he concluded.

Powerful people in the United Arab Emirates, Egypt, Sudan, Bahrain, Kuwait, Morocco, Senegal and Jordan have colluded with Saudi Arabia’s Crown Prince to prolong the war against Yemen. The Saudis have employed Sudanese fighters from the terrifying Janjaweed militias to fight in small cities along Yemen’s coast line. The seeming objective is to gain ground control leading to the vital Port of Hodeidah. UAE military are reported to operate a network of secret prisons where Yemenis disappear and are tortured, deterring people from speaking up about human rights violations lest they land in one of these dreaded prisons.

Among the most powerful warlords participating in the war are the U.S. and the UK.

Despite the recent publicity for stern words from Donald Trump and Theresa May, urging Saudi Arabia to lift its blockade of Yemen, both countries continue to pocket billions of dollars selling weapons to Saudi Arabia. President Trump swiftly condemned the Houthi fighters for firing several rockets at Saudi Arabia and the UAE. But the Houthis could claim to be using these weapons in self-defense after Saudi and UAE jets have dropped tons of bombs, purchased from the U.S. and the UK, on Yemeni cities and civilians. Observers say if the U.S. stopped its midair refueling of Saudi bomber planes, the war would end shortly thereafter. Yet, the U.S continues these military operations. The UK still supplies the Saudis with surveillance, and both countries work to maintain a comfortable relationship with the Saudi Ministry of Defense and Crown Prince Mohammed bin Salman.

Just over 1,000 days of Saudi-led coalition war against the Houthi rebels in Yemen has been deadly and devastating for Yemeni civilians.

Mark Lowcock, the UN Humanitarian Coordinator in Yemen, says that 7 - 8 million Yemenis are one step away from starvation. The BBC reports that more than 80% of Yemenis lack food, fuel, water and access to health care.

The number of suspected cholera cases in Yemen has reached one million, according to the International Commission of the Red Cross.

1.8 million children in Yemen are acutely malnourished, including 400,000 under the age of five who suffer from severe acute malnutrition. Malnourished children are also at increased risk of dying from infectious diseases.

Like the children of Iraq who perished by the hundreds of thousands during U.S. led economic war against Iraq, these little ones in Yemen mean harm to no one. They’ve done nothing to deserve punishment. Yet, they will pay the price for abysmally failed policies. The food and clean water they hunger and thirst for could reach them, but not if powerful elites decide it’s acceptable to blockade Yemen’s ports, bomb roadways, destroy sewage and sanitation systems, attack fishermen and farmers, and even kill participants at a wedding celebration.

After dancing in Saudi Arabia with Mohammed bin Salman and other Saudi princes, President Trump set in motion a $110 billion-dollar weapons deal.

Boeing, Raytheon, and other military contractors already benefiting from this deal will likely agree with Crown Prince Mohammed bin Salman: a long war is in their best interests.

But, ordinary people who prefer not to be represented by vicious warlords and who face no risk of torture, disappearance or other frightening punishments (people like me for instance) have a responsibility to speak up visibly and clearly. Time is running out for the children of Yemen. The Crown Prince is mistaken. Any war, long or short, may seem to favor the perpetrators, but in the long run wars sow seeds of revenge, retaliation, hatred and death. Real courage requires control over our fears and mutual agreements to protect the most vulnerable among us. Especially the children.

Death, Misery and Bloodshed in Yemen

One Year After Khashoggi’s Brutal Murder: Business as Usual?