Ladies in Pink Slips: Learning from 10 Years of Creative Resistance to War

Ten years ago, a group of women dressed in hot pink and stood in the snow in front of the White House to protest the looming war in Iraq. CODEPINK Women for Peace emerged that day, and we are thrilled this November, 2012, to be celebrating a decade of creative, colorful resistance.

[caption id="" align="aligncenter" width="450" caption="Watch Our 10 Year Anniversary Video to find out what we've learned from a decade of bold protest!"] 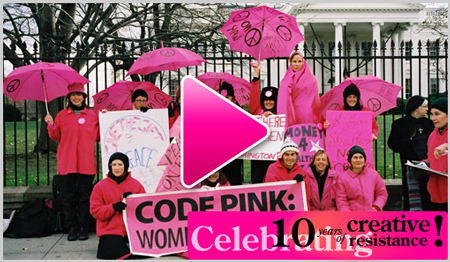 We’ve learned a lot over these past ten years--about ourselves, about the world, about how to make a difference. Here are ten of our most profound lessons:

From the start, we knew that to change public opinion on the war, we would need to engage in bold, attention-getting actions that could push the issues onto the front page. Ever since, we’ve tried not to do anything timid, whether we’re dropping giant pink slip banners from the tops of buildings, or wrapping the world’s largest knitted scarf around the White House with a Mother’s Day call for peace, or assembling massive aerial images to make our message as loud and clear and communal as possible. Our hearts may pound when we launch these bold actions, but we’ve learned that the most amazing things happen when we push past our fear. 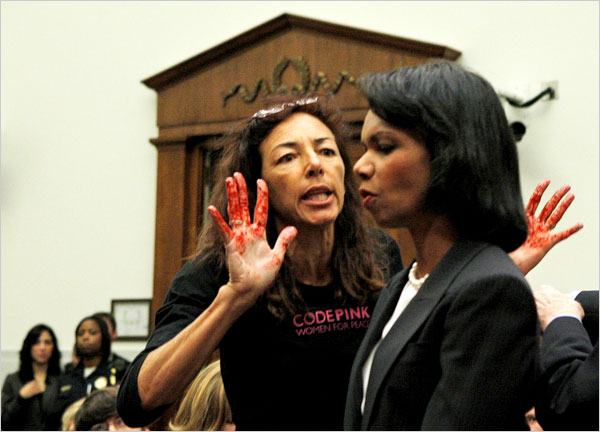 We refuse to be cornered into a protest pen.  We’ve learned it’s important to get inside, whether we’re in a congressional hearing, or disrupting a political convention, or staging citizens’ arrests during expensive fund raisers. The image of our own Desiree Fairooz holding up bloody hands to Condoleezza Rice was one of the most widely shared news images of 2007. If we want things to change, we need to expose the public relations efforts of the armed and dangerous, and what better way to do that than confront their propaganda head on?

3. Be a Rapid Responder

CODEPINK was founded to stop the war in Iraq before it even began, and ever since, we have been committed to responding immediately to any new crisis so we can expose injustice before it gets entrenched and inspire change. Whether we are delivering medical aid to Gaza immediately after Israeli bombing, or marching outside BP headquarters in Texas just after the oil spill, or creating a "Make Levees not War" action in the Tidal Basin in the wake of Hurricane Katrina and fundraising for relief efforts, or standing with Occupy Wall Street from day one, we are often one of the first progressive groups on the ground to be a voice for change. Witnessing the shift in warfare to using robotic planes, we staged protests outside of drone bases, led a delegation to Pakistan, and co-founder Medea Benjamin authored Drone Warfare: Killing By Remote Control in advance of major news coverage or academic studies on the topic of killer drones.  Right now, just one week after the election, we are in DC to call on President Obama and the newly elected Congress to implement a People’s Peace Platform and lay out serious demands for the next four years.

4. Be Creative and Make Beautiful Trouble

The US wars in Iraq and Afghanistan were so outrageous, we knew we needed to counter them with outrageously creative action. We built a giant pink bed to roll down the street in DC, telling our leaders to “Wake up and end war.” We stood in muddy bikinis to protest Ahava’s illegal Israeli settlement-produced cosmetics. We staged a mock naval blockade of Congressman Gary Ackerman’s houseboat on the Potomac with canoes and rafts after he introduced a resolution to block ports in Iran (when he walked up to his boat and saw us, he called it the “most creative protest he had ever seen” and engaged the group in a lively half hour discussion that ended with him promising to do whatever he could to prevent war with Iran.) Some of our creative tactics were featured in the new book Beautiful Trouble: An Activist Toolbox for Revolution.  We will keep coming up with wild new ways to draw attention to absurdities and abuses of power--sometimes matching outrageousness with outrageousness is the only way to shake things up! 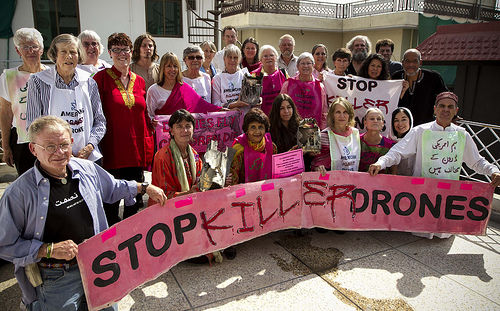 For all of our pink boas and glitter, CODEPINK is deeply serious about creating peace. One of the things we are most proud of is our building of bridges across closed borders.  We organized delegations to go into Iraq when few Americans were going there.  We have taken trips to Iran and Afghanistan to connect with the people and hear their ideas for peace, and recently joined a massive stop drones peace march in Pakistan to show what real citizen diplomacy looks like. In the aftermath of the Israeli assault on Gaza in 2009, we coordinated a delegation into Gaza that delivered humanitarian aid and gift baskets to women on International Women's Day, and since then we've coordinated numerous delegations into Gaza, Israel and the West Bank to join nonviolent Palestinian-led campaigns for human rights, justice and equality.  We make important human connections in places our country has dehumanized, and in the process, hope to change the larger story about these countries. It’s harder to bomb a place when you know its people’s names and faces; when you are aware of their fears and dreams.

a network of creative people, not a hierarchy. Communities all over the country create their own local CODEPINK actions, staging “I Miss America” pageants and “Walk in their Shoes” campaigns (laying out hundreds of shoes, each tagged with the name of a person killed in Iraq to drive home the human cost of war), and getting their mayors to agree to Bring Our War $$ Home, and hosting movie nights and house parties to raise awareness about important issues. Our next big action could be inspired by a local group in a small town in Iowa.… maybe even you!

It’s important to us to make connections--connections between issues, such as our “Bring Our War $$ Home” which connected the dots between the war and the economy, as well as connections with other movements and organizations, so we can strengthen and amplify our voices together. We are proud to have co-founded United for Peace and Justice, the largest umbrella peace organization, and continue to build bridges with other groups to make sure we can make a difference together. While we primarily focus on anti-war efforts, we've joined in struggles for climate justice, immigration reform, women's reproductive rights, and civil liberties, to name a few.  As we say in our mission statement, we're not just about ending war; we are working to change our national policy to prioritize life-affirming activies such as healthcare, education, and green jobs, over runaway military spending.  Recognizing the link between war and violence against women, we will be joining Eve Ensler’s Billion Women Rise day of creative actions on February 14, 2013.

CODEPINK has never been about fists in the air. We want to smash paradigms without smashing windows. Our name started as satire--a play on Bush’s color-coded terror alert system--and it is important to us to hold on to that spirit of playfulness. Making a difference doesn’t have to be a chore--we’ve proven again and again that it can be fun and energizing to change the world. Whether we’re dressing up like vaginas to protest the Republican war on women, or moving Bush’s memoir from the “Autobiography” shelves to the “Crime” or “Horror” sections of the bookstore, or tossing bras to “bust up” big banks, we find ways to illuminate the darkness with a light and playful touch.

We are modeling the world we want to live in through our grassroots leadership and autonomous local organizing. We're planting peace gardens in New Orleans, delivering medical aid and blankets to war survivors from Iraq to Palestine, and finding other creative and affirming ways to embody our belief in the power of love over fear, justice over violence. 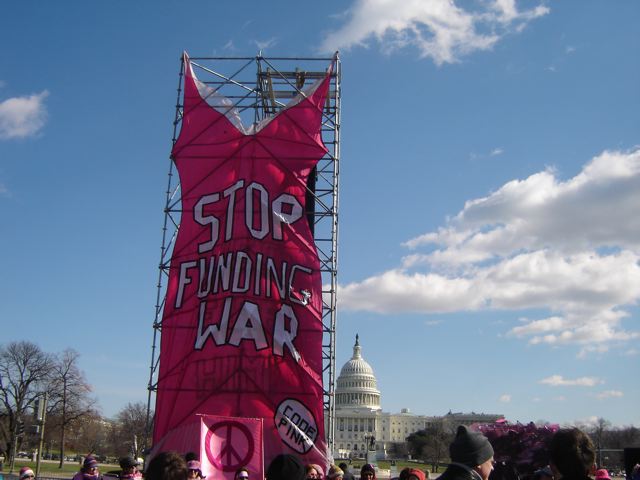 If a pink slip drops and no one sees it, did it happen?  We get our actions out quickly and tell the story behind the work. Changemaking is about stories and heart, not just statistics and graphs. We certainly try hard (and often succeed) in getting mainstream media coverage, but can’t count on it. So we have learned to write our stories, tweet them, film and edit our own youtubes. When we confront a key official who is launching drone attacks in Pakistan, people in Pakistan will hear about it minutes later!  We've penned our own books, Stop the Next War Now and Drone Warfare, and been featured in numerous activist anthologies.

We are eager to continue to write the story of CODEPINK over the next 10 years and beyond; we know that we still have so much to learn, and we are excited and energized for the challenges ahead. We hope that you will be part of CODEPINK’s story as it unfolds.

Gayle Brandeis is an award-winning novelist and activist with CODEPINK.  She currently lives in Riverdale, California.