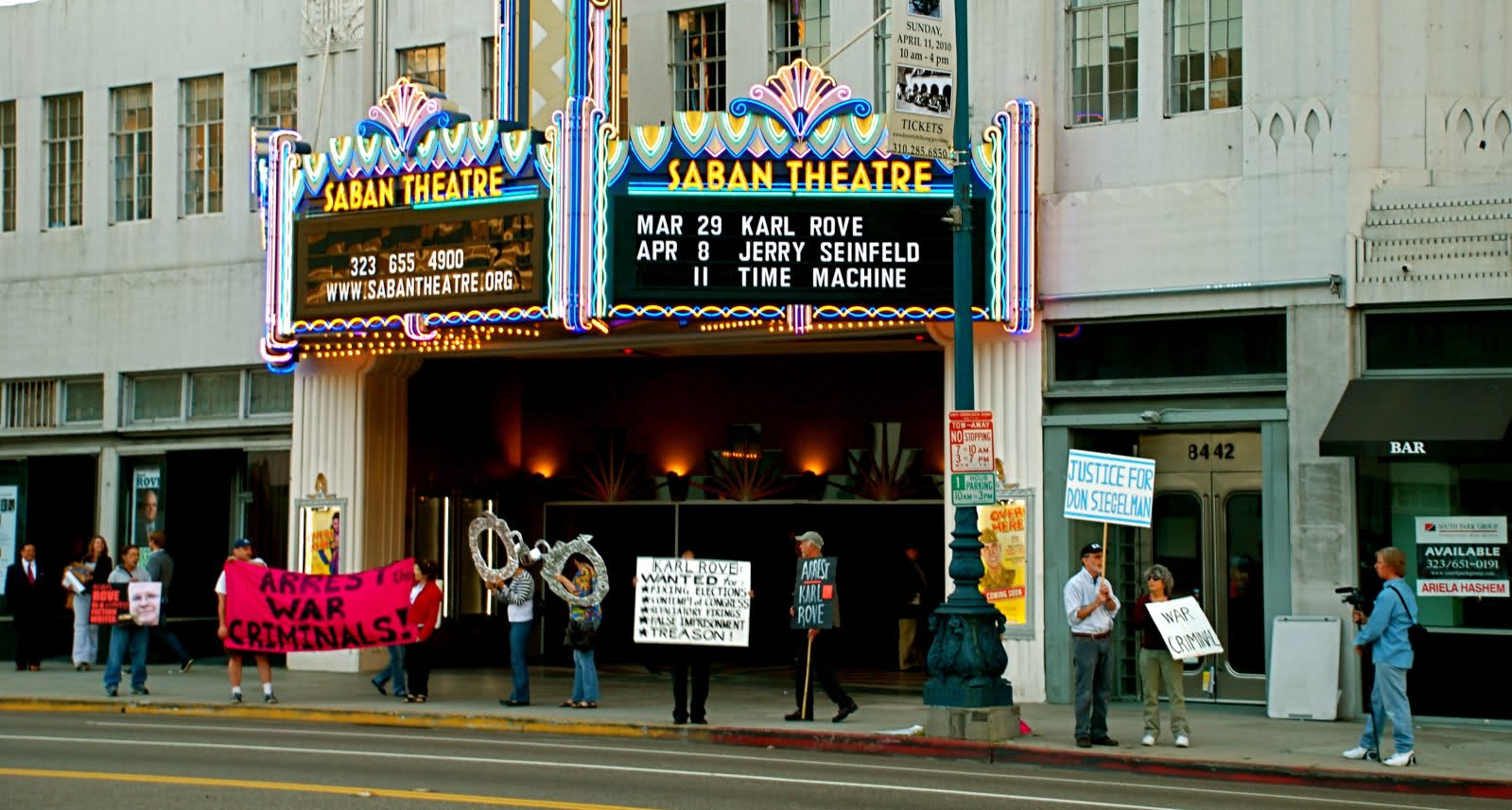 "HE wanted to do a book signing and SHE wanted to arrest him" was the lead story on KCBS in Los Angeles last night. Dozens of supporters and activists came out to see Karl Rove in Beverly Hills, who is currently on tour to sell his new book: Courage and Consequence: My Life As a Conservative in the Fight. But Rove was chased out of the event by a few women in pink.

After almost an hour of his lies, I leapt up with a set of handcuffs and my full page arrest complaint followed immediately by the event security. I managed to get very close to Rove, even tricking the security to let go causing Rove to dash away while I reached for his wrist with the hand cuffs.

My words followed him. But he only went a few steps before he was greeted by Dede Miller, whose nephew Casey Sheehan (the son of Cindy Sheehan) was killed in Iraq 6 years ago on April 4th. While holding up a photo of Casey, she told Rove that his lies killed her nephew. Patricia Foulkrod, director of the Ground Truth, also stood next to him with an Arrest the War Criminal banner as the event unraveled and he announced to the organizers it was over.

There is no courage and consequence in Rove's story. At CODEPINK, we could not allow this war criminal to tout his book around the country and get away with describing anything tied to former President George W. Bush as courageous, never mind the fact that there has been no consequence for his serious and constant lies. Lies that led the United States to invade an innocent country at the cost of over 100,000 US casualties and an estimated million Iraqi lives, with another 4 million displaced. Lies that covered up the elections he shamelessly stole. And lies that continue to serve the military-industrial complex, kill our troops and jeopardize the safety and security of Americans and millions around the world.

We can’t sit back and allow Karl Rove to continue to spread more lies without consequence. Until these war criminals face justice, until they are held accountable for their crimes, the lies continue to spread, creating an unreality and delusion that is at the root of the tea bagger anger.

We can’t let these war criminals continue to collect $30,000 to $300,000 speaking fees while spreading more lies. Everyone should treat these criminals the same. The judicial courts may not try them but the courts of public opinion must. Without the rule of law, it is all darkness.

This is CODEPINK’s 6th attempt to arrest Rove and we invite you to join in as he continues with his book tour. Check to see when he will be near you and get helpful citizen arrest tips from CODEPINK here. You can also get a deck of our war criminal cards and find one of the other 52 war criminals near you to conduct an arrest.

We at CODEPINK refuse to stop working for accountability. We cannot turn our back on Justice, because by doing so we empower more liars. Besides, government, politics, Wall Street, and the media are flooded with them. We must stem the tide.