Iraqi People Caught in the Indiscriminate Fire of Terrorists 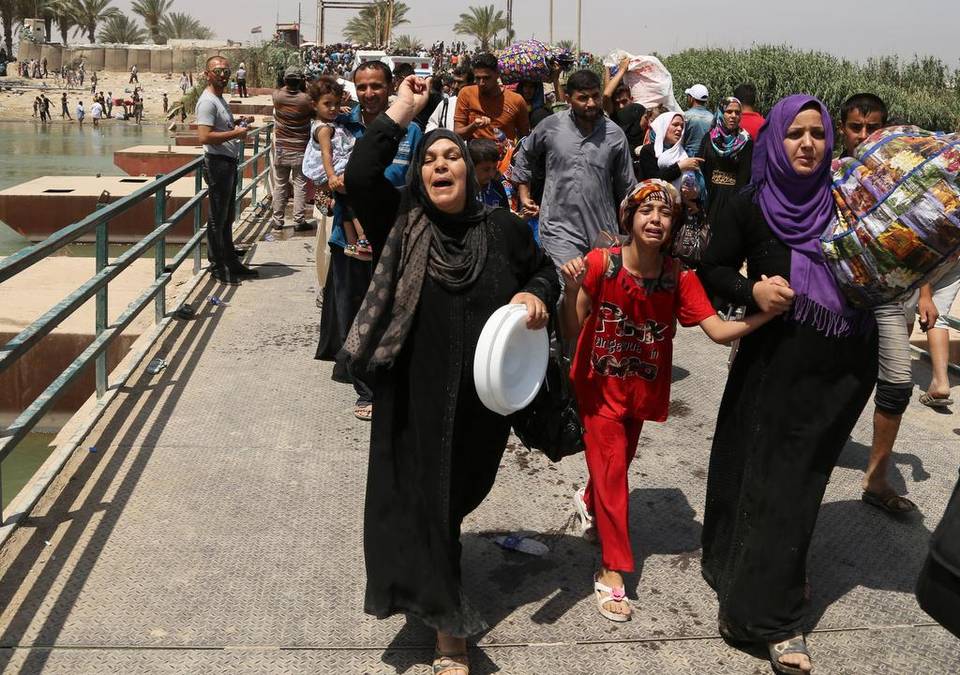 The situation of Iraqi refugees, both those who have fled to other countries and those internally displaced, is disastrous. The UN High Commissioner for Refugees, António Guterres, said that there are 15 million refugees in Iraq and Syria living in unimaginable conditions. Refugees lack the most basic necessities such as food, water, and shelter. They are constantly subjected to humiliating treatment by security forces, including bribes and beatings. The situation is the worst for the most vulnerable: children, the elderly, and people with special needs.

A Human Rights Watch report in mid-May stated that 3.7 million Iraqis have been internally displaced in the last decade. UNICEF described the situation as catastrophic. According to the United Nations Organization, 8 million Iraqis are in need of urgent humanitarian aid, including about 3 million people who have fled their homes since the beginning of June 2014, while ISIS launched a large-scale attack and has managed to seize large areas in both Iraq and Syria.

Since mid-May, the situation has been exacerbated by the ISIS takeover of Ramadi. The flow of refugees out of Ramadi, located in the Anbar province of Iraq, has created a severe crisis, especially after Baghdad and the region of Kurdistan refused to accept those displaced by the ongoing violence. State police and army forces have blocked refugees from crossing the Bzebiz Bridge between Anbar province and Baghdad, and as a result, thousands of families have been trapped in the desert under the scorching sun, where the temperature reaches extreme levels in May. Refugees could not return to Ramadi after the city was captured by ISIS and continuously bombed by the US-led coalition against ISIS. Local television stations, UN organizations, and international media have reported heartbreaking stories of parents who have lost their children, children desperately looking for their parents, and mothers crying hysterically over their broken families. One tragic story recounts a father holding the dead body of his two-year-old son, refusing to bury him. In a similar story reported by Human Rights Watch, a father drowned himself in the river after throwing his two sons, ages five and six, into the river. This story is reminiscent of the tragedy of Muhammad al-Durrah, a child who was killed in his father’s lap during Israeli strikes on Gaza in 2000.

The UNHCR reported on May 26 that Iraqi civilians fleeing violence in Ramadi face numerous roadblocks on their path to safety, including dwindling resources, checkpoints, entry restrictions and security procedures. More than 40,000 residents of the Anbar province are now stranded in Amiriyat al-Fallujah, the entry point to the Bzebiz Bridge, after officials have inexplicably restricted access to crossing the bridge. Due to excruciating weather conditions, the lack of sufficient shelters, supplies, and medical assistance on either side of the Bzebiz Bridge has led many refugees to lose their lives while attempting to seek safety. In the town of Niba'i, south of Salah Addeen, 900 families were forcefully displaced by the PMUs (Popular Mobilization Units), Shiite forces that are meant to combat ISIS. Eyewitnesses detail accounts of houses, properties, field animals, and agricultural tools being looted by soldiers and militia men. Similarly, families in the governorate of Diyala are waiting on Kurdistan borders, facing even more difficulties.

The number of displaced persons in the city of Ramadi has increased to 200,000, according to many human rights organizations and officials. Human Rights Watch stated that "Iraqi authorities are preventing thousands of families fleeing the fighting in Ramadi from reaching safer parts of the country. The government of Iraq has primary responsibility for protecting internally displaced people and should allow those fleeing danger in their hometown to easily enter safer areas."

Ramadi was captured by ISIS forces in May after the Iraqi Army and police forces (24,000 policemen) deserted their locations, leaving behind a huge stockpile of weapons and ammunition. This not only left a power vacuum for ISIS to enter and acquire these abandoned weapons, but it also left behind shocked civilians watching the armed forces abandoning their own citizens instead of fighting to defend them. The similarity between this scenario and what had happened in Mosul in June 2014 is glaring. Moreover, civilians are caught in the crossfire between ISIS and the sectarian militias of the PMUs. Each party accuses civilians of allying with its opponent. Estimates are that at least 500 civilians and Iraqi soldiers were killed during military confrontations in Ramadi on May 16-17 alone.

Different sources identify different causes to this repeated pattern of premature military retreat. The Ministry of Defense blames it on erroneous decisions by field commanders; Prime Minister Abadi ordered that those responsible be tried in a military court. Analysts point to the military ferociousness of ISIS, including the use of car bombs and suicide bombers at military sites. Many others, including the head of the governing council of Anbar, Sabah Kerhut, accuse the army of cowardice.

Although the US and the Shiite PMUs are politically opposed to each other, they both agree that the Iraqi army is not performing adequately. US Secretary of Defense Ashton Carter argued that Iraqi forces “lack the will to fight.” Carter further recommended that Sunni governorates, tribes and the Peshmerga (Kurds) be armed to fight terrorism. Meanwhile John Allen, the commander of the Global Coalition to Counter ISIL in Iraq, accused the Abadi government of lacking control over ground forces, in reference to the atrocities committed by militias who are supposed to fight ISIS, not hurt citizens. Furthermore, Iran practically commands the ongoing military operations. In fact, in the battle of Ramadi a third high ranking commander in the Iranian Revolutionary Guard was killed, Jassim Nuri. The other two, Ridha Husseini and Hamid Taqawi, were killed in Samara.

Two spokesmen for the PMUs, Karim al-Nuri and Ahmed al-Assadi, have confirmed the participation of the Iranian militias in the fighting. Both joined Defense Secretary Carter in criticizing the Iraqi army's lack of morale. They also bragged about their men's ruthlessness, citing their performance in governorates such as Diyala and Salah- Addeen, where many crimes were committed. Some analysts conclude that the retreat of state-led armies is an indirect invitation for the Iran-led PMUs to wage sectarian war in Sunni districts. Indeed, with green light from the Iraqi and the US governments, on May 26 the PMUs have started their attack on Ramadi from 3 different fronts accompanied by the Iraqi armed forces and covered by the global allied bombing.

The "Labaik Ya Hussein" operation, later renamed “Labaik Ya Iraq (We Are At Your Service, Iraq)”, has been a bone-breaking battle for both sides. The government is worried about Baghdad, which lies 100 kilometers to the east. While the siege of Ramadi continues, ISIS has been waging heavy bombing on the strategic Habbaniya military airbase, killing dozens. Well-planned operations are taking place in the Aljizeera area, a strategic triangle between Andar, Salah Addeen and Nineveh governorates, to cut off supplies from Ramadi. Several villages and towns in Aljizeera have experienced an onslaught of  fighting, destruction and displacement from all sides. The number of casualties differs according to the source, but they are in hundreds.

One of the most tragic cultural crimes is the destruction of the Assyrian archaeological site known as Al-Shirqat citadel, which goes back to 3000 BC and is registered by UNESCO as a world heritage site. The stone gates were said to be destroyed by ISIS with huge quantities of explosives. The UN called it a war crime against Iraqi culture. IS had already destroyed the ancient city of Nimrud three months ago.

The portrayal of the conflict in the mainstream Western media contributes to the lack of understanding about how dire the situation is. The media hails the war against terrorism as a war that will bring civilization to primitive Islamic terrorism. The news does not elaborate on individual stories or tragedies, but rather just includes generic pictures of military tanks driving through dusty streets, while news anchors say a few words about a war to liberate Iraq from Islamic terrorists. Viewers are not made aware of the impact on children, families, and the refugee crisis.

Meanwhile, a barrage of horrific videos has flooded the Internet and various social media sites, showing Shiite militia men and Iraqi army officials in criminal situations. These men participate in incidents of killing, beheading, stabbing, slaughtering, hanging or beating to death some unarmed men, single or in groups, in broad daylight. Other videos show military men and militias looting houses and shops, burning them, or transporting piles of dead bodies. Throughout these violent occurrences, voices are clearly heard using vulgar curses against Sunnis. These videos also show multiple Iraqi villages and towns completely abandoned -- places that were supposed to be "liberated" by the Iraqi Army and the Western coalition to fight terrorism. One such video shows a terrified 10-year-old boy, sitting on the ground, surrounded by several Iraqi soldiers who brutally abuse him. Shortly after, some shots are heard and the boy lies dead on the ground.

Over the past year, as the U.S. continued to ship military aid to Baghdad, Human Rights Watch documented unspeakable abuses by forces loyal to the Maliki government: indiscriminate air strikes that killed hundreds or even thousands of civilians in Sunni areas; torture and extrajudicial killings in prisons; a justice system that seemed exponentially more abusive than just; and, most recently, Maliki’s incorporation of Shia militia into the government’s security forces to the extent that the two are now effectively indistinguishable.

The question remains: why do the US and other world powers insist on solving the problem by sending more weapons, after it has been proven repeatedly that this is not a solution? Why not seek a political solution through talks? For as it stands now, the Iraqi people are caught between the barbarity of ISIS, the barbarity of Iranian-backed militias, indiscriminate air strikes that kill civilians, and an Iraqi military that is not interested in fighting.

We need to take care of the millions of refugees creating since the 2003 invasion of Iraq, putting responsibility squarely on those countries that participated in the invasion that opened the doors to the present crisis. And we urgently need to find a political solution that will stop the bloodletting that has so devastated Iraq.

Eman Khammas is an Iraqi journalist and former Director of the CODEPINK Iraq Occupation Watch.