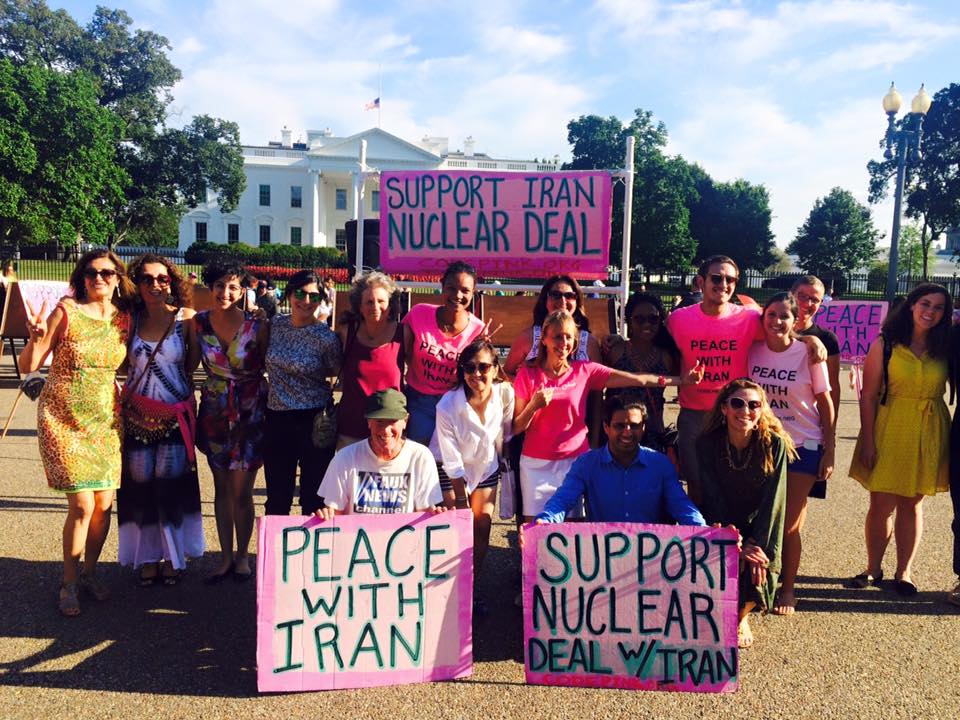 CODEPINK rally for Iran deal outside the White House

On October 13, President Trump announced his decision not to certify that Iran is complying with the 2015 nuclear deal.

The president’s announcement does not end the agreement but passes the buck to Congress. In the next 60 days, Congress could impose new sanctions that would scuttle the deal. It could pass new legislation addressing issues that were never part of the original mandate, which could also effectively kill the agreement. Or it could do what’s best for the US national interest: leave the deal intact.

Here are 10 good reasons why Congress should uphold the agreement as it presently stands.

1. President Trump’s claim that Iran is not complying with the conditions of the deal is false. Iran is complying, as certified in eight reports over the past two years by the International Atomic Energy Agency (IAEA), the entity charged with monitoring the deal. The Trump administration has not produced any evidence that Iran is not holding up its part of the bargain. Trump’s concern about Iran’s missile tests and its ties to militia groups are different issues. They’re not part of this narrow, clearly defined nuclear deal.

2. The deal is actually a good one for the United States and the region because it does what it set out to do: keep Iran from developing nuclear weapons. It eliminates two-thirds of Iran’s centrifuges and 98 percent of its enriched-uranium stockpile, and it is verified by the most intrusive verification and inspection regime ever negotiated.

3. Scuttling the agreement would isolate the United States, not Iran. Of the six nations that signed the deal, only the United States is complaining. The other signatories are the four permanent members of the United Nations Security Council—Britain, France, Russia and China—plus Germany and the European Union. All have expressed their commitment to upholding the agreement. A U.S. pullout would leave the U.S. out in the cold and collapse the consensus hashed out among our allies.

5. The U.S. needs to work with Iran on ending the violence in the region, from Yemen to Syria. Trump’s concerns about Iranian support for the “three Hs”—Hezbollah, Hamas and the Houthis—will be exacerbated if the deal is undone, as Iran will have an even greater incentive to oppose U.S. policies. If the deal holds, it will pave the way for talks with Iran about all these other issues.

6. Without this deal, Iran would be free to rapidly reconstitute its nuclear program, installing more centrifuges and accumulating a larger stockpile of bomb-usable material. It would free Iran to produce as much enriched uranium or plutonium as it wants. If U.S. officials are troubled by Iran’s foreign policy now, imagine how much more powerful a nuclear-armed Iran would be. That is why Secretary of State Rex Tillerson and National Security Adviser H.R. McMaster have argued against withdrawal.

7. De-certification would weaken global confidence in the United States and multilateralism. The deal was not only made between six nations, but the entire U.N. system. The U.N. Security Council approved the deal by a 15-0 vote. Putting the deal in jeopardy would compromise the entire international framework for nonviolent conflict resolution and sink international respect for U.S. leadership to a new low.

8. If the U.S. pulls out and imposes more sanctions restricting business with Iran, those most affected would be U.S. businesses. U.S. firms are anxious to jump into this massive market of 80 million people. While Trump is busy whining about the “worst deal ever,” the Chinese have just signed cooperation agreements with Iran on energy, transport, science, technology and national defense—agreements worth up to $600 billion in the next 10 years. European companies from Total to Citroen to Airbus have signed agreements as well. Meanwhile, U.S. businesses will be left empty-handed.

9. Trump’s bombastic talk about a “military option,” with strikes on Iran’s nuclear facilities, could lead to a catastrophic war. Iran could immediately retaliate by attacking Israel and U.S. troops stationed in Iraq, Afghanistan and on military bases throughout the Middle East. That’s why Republican senator and chair of the Senate Foreign Relations Committee Bob Corker has warned that Trump’s actions risk setting the nation “on the path to World War 3.”

10. Upending the agreement will be a boon to Iran’s conservative clerics, the very ones we don’t want to embolden. President Rouhani will lose power to the hardliners, who were against negotiating with the West from the get-go. Their hand will be strengthened on the nuclear issue and other issues pertaining to Iran’s foreign affairs, which would spell more chaos in the region. It could also lead to a backlash internally against the more secular, liberal forces in Iran.

Toying with a serious nuclear agreement to influence Iran in other areas is simply irresponsible and dangerous. That is precisely what defines President Trump: irrational and dangerous. Before he destroys the best global foreign policy achievement in the last decade, the world community—from the U.N. to the U.S. Congress to the public–has to stop him.

Medea Benjamin is cofounder of CODEPINK and author of “Kingdom of the Unjust: Behind the U.S.-Saudi Connections.”