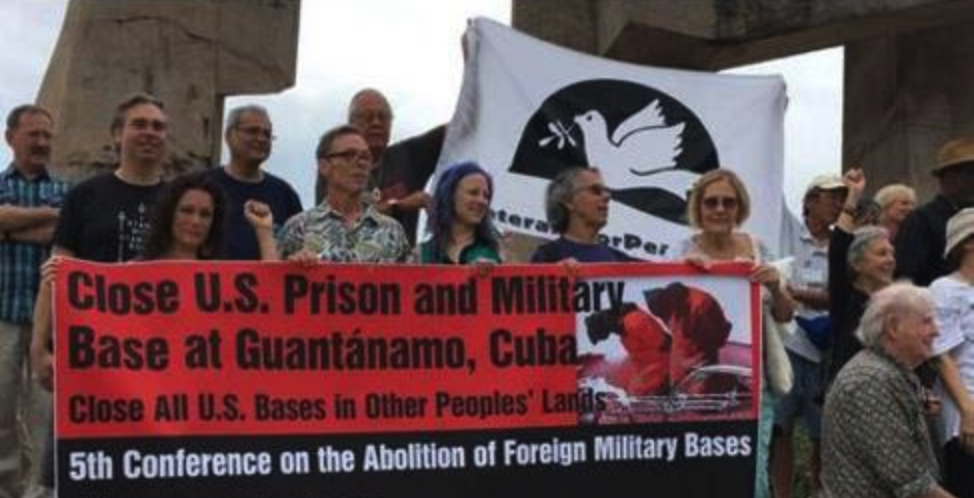 217 delegates from 32 countries attended the Fifth International Seminar on the Abolition of Foreign Military Bases, held in Guantanamo, Cuba May 4-6, 2017.  The theme of the seminar was “A World of Peace is Possible.”

Speakers included the President of the World Peace Council Maria Soccoro Gomes from Brazil; Silvio Platero, President of the Cuban Peace Movement: Daniel Ortega Reyes, Member of the National Assembly of Nicaragua; Bassel Ismail Salem, representative of the Popular Front for the Liberation of Palestine; representatives of the Okinawan movement against U.S. military bases at Takae, Henoko and Futemna and Ann Wright of Veterans for Peace.

Ian Hansen, President of the Psychologists for Social Responsibility, spoke about U.S. psychologists who had participated in torture of prisoners at Guantanamo and black sites and the decision of the American Psychologists Association to renounce its previous acceptance of unethical language which allowed psychologists participation in interrogations for “national security.”

The symposium included a trip to the village of Caimanera which is located on the fence line of the U.S. military base at Guantanamo Bay.  It has been in existence for 117 years and since the Cuban Revolution in 1959, the U.S. has issued a check each year for $4,085 for annual payment for the base, checks which the Cuban government has not cashed.

To prevent any pretext for U.S. violence against Cubans, the Cuban government does not permit Cuban fishermen to go out of Guantanamo Bay past the U.S. Naval Base to fish in the ocean.  In 1976, the U.S. military attacked a fisherman who subsequently died from his injuries. Interestingly, Guantanamo Bay is not closed to Cuba commercial cargo freighters.  With coordination and authorization with the U.S. military forces, cargo ships carrying construction supplies and other merchandise for the village of Caimanera and for Guantanamo City can transit past the U.S. Naval Base.  Other Cuban government coordination with the U.S. Naval Base authorities include for response to natural disasters and for wildfires on the base.

Veterans for Peace and CODEPINK: Women for Peace had delegations attending the conference with other U.S. citizens representing the Women’s League for Peace and Freedom, the U.S. Peace Council, and the Socialist Workers Party.

I also was honored to be asked to speak at the Symposium.

This is the text of my talk:

THE TRUMP ADMINISTRATION, THE MIDDLE EAST AND THE U.S. MILITARY BASE AT GUANTANAMO

By Ann Wright, retired U.S. Army Colonel and former U.S. Diplomat who resigned in 2003 in opposition to President Bush’s War on Iraq

With a new President of the United States in office barely four months, who has sent 59 Tomahawk missiles into an air base in Syria and who is threatening further U.S. military actions from North Korea to more attacks on Syria, I represent a group of veterans of the U.S. military, a group that rejects U.S. wars of choice and rejects the huge number of U.S. military bases we have on the lands of other nations and peoples.  I would like for the delegation from Veterans for Peace to stand.

I am a 29-year veteran of the U.S. Army.  I retired as a Colonel.  I also served in the U.S. Department of State for 16 years in U.S. Embassies in Nicaragua, Grenada, Somalia, Uzbekistan, Kyrgyzstan, Sierra Leone, Micronesia, Afghanistan and Mongolia, the last four Embassies as Deputy Ambassador or at times, acting Ambassador.

However, in March 2003, fourteen years ago, I resigned from the U.S. government in opposition to President Bush’s war on Iraq.  Since 2003, I have been working for peace and ending U.S. military operations around the world.

First, here in the city of Guantanamo, I want to apologize to the people of Cuba for the U.S. military base the U.S. forced on Cuba in 1898, 119 years ago, the military base outside the United States that my country has occupied the longest in its history.

Secondly, I want to apologize for the purpose of the U.S. Naval Base Guantanamo. I apologize that for fifteen years, since January 11, 2002—the Guantanamo prison has been the site for the illegal and inhumane imprisonment and torture of 800 persons from 49 countries.   41 prisoners from 13 countries remain imprisoned there including 7 men charged and 3 convicted by the U.S. military commission court. There are 26 indefinite detainees known as “forever prisoners” who will never receive a military commission trial because they would undoubtedly reveal the illegal, criminal torture techniques U.S. officials, both CIA and U.S. military, used on them.   Five prisoners were cleared for release, including two whose repatriation deals stalled at the Department of Defense in the last days of the Obama administration and who, tragically probably will not be released by the Trump administration. http://www. miamiherald.com/news/nation- world/world/americas/ guantanamo/article127537514. html#storylink=cpy.  Nine prisoners died while at the U.S. military prison, three of whom were reported as suicides but under extremely suspicious circumstances.

In the past fifteen years, those of us on the U.S. delegations have held countless demonstrations in front of the White House.  We have disrupted Congress demanding that the prison be closed and the land be returned to Cuba and we have been arrested and sent to jail for disrupting Congress.  During the Trump presidency, we will continue to demonstrate, disrupt and be arrested in our efforts to close the U.S. military prison and the U.S. military base at Guantanamo!

U.S. military has over 800 military bases around the world and is expanding the number rather than decreasing them, particularly in the Middle East.  Currently, the US has five major air bases in the region, in the UAE, Qatar, Bahrain, Kuwait and Incirlik, Turkey. https://southfront. org/more-details-about-new-us- military-base-in-syria/

In Iraq and Syria, U.S. “lily pad” bases, or small temporary bases have been created as the United States increases its support for groups fighting the Assad government and ISIS in Syria and support for the Iraqi Army as it battles ISIS in Iraq.

In the past six months, the US Air Force has built or reconstructed two airfields in northern Syria near Kobani in Syrian Kurdistan and two airfields in Western Iraq. https://www.stripes.com/ news/us-expands-air-base-in-no rthern-syria-for-use-in-battle -for-raqqa-1.461874#.WOava2Tys 6U U.S. military forces in Syria are supposedly limited to 503, but troops who are in the country under 120 days are not counted.

The US created a new military base in the western part of Syrian Kurdistan, also known as Rojava. And it is reported that “a large group of the well-equipped US Special Forces” is located at the Tel Bidr base, located to the northwest of Hasakah.  https://southfront. org/more-details-about-new-us- military-base-in-syria/

The Obama administration had capped the number of US military in Iraq at 5,000 and in Syria at 500, but the Trump administration is apparently adding another 1,000 into Syria.    https://www. washingtonpost.com/news/ checkpoint/wp/2017/03/15/u-s- military-probably-sending-as- many-as-1000-more-ground- troops-into-syria-ahead-of- raqqa-offensive-officials-say/ ?utm_term=.68dc1e9ec7cf

Syria is the site of Russia’s only military bases outside of Russia with the naval facility in Tartus, and now at Khmeimim Air Base with Russia military operations in support of the Syrian government.

Russia also has military bases or the Russian military is using facilities many of the former Soviet republics now through the Collective Security Treaty Organization (CSTO),  including 2 bases in Armenia https://southfront. org/russia-defense-report- russian-forces-in-armenia/;

a radar and naval communications station in Belarus; 3,500 military personnel in South Ossetia Georgia; the Balkhash Radar Station, the Sary Shagan anti-ballistic missile test range and the Space Launch Center in Baikinor, Kazakhstan; Kant Air Base in Kyrgyzstan; a military task force in Moldova; the 201st Military Base in Tajikistan and also a Russian Navy resupply facility at Cam Ranh Bay, Vietnam

The U.S. base, Camp Lemonnier at the Djibouti International airport, is the site of a large drone base hub used for assassin operations in Somalia and Yemen.  It is also the site of the U.S. Combined Joint Task Force-Horn of Africa and the forward headquarters of the U.S. Africa Command.  It is the largest permanent U.S. military base in Africa with 4,000 personnel assigned.

China is the latest country that has built a $590 million military base and port in Dijoubti only a few miles from the United States facilities in Dijbouti.  The Chinese say that the base/port is for UN peacekeeping and anti-piracy operations. Additionally, the  Export-Import Bank of China has 8 projects in region including a $450 million airport in Bicidley, a city south of the capital of Dijbouti, a $490 million railway from Addis Abba, Ethiopia to Dijbouti and a $322 million water pipeline to Ethiopia.  The Chinese also have created bases on atolls in the disputed areas of the South China Sea creating tensions with Vietnam and the Philippines.

In Kuwait, the U.S. has facilities on four bases including: three camps at the Ali Al Salem Air Base including Camp Arifian and  Camp Buchring.   The US Navy and US Coast Guard uses on the Mohammed Al-Ahmad Kuwait Naval Base under the name Camp Patriot.

In Israel, the U.S. has 120 U.S. military personnel at the Dimona Radar Facility, an American-operated radar base in the Negev desert as a part of the Iron Dome project—and located in the same area as the Israeli Nuclear Bomb facilities.  120 U.S. personnel operate 2 X-Band 1,300 feet towers—the tallest towers in Israel for tracking missiles up to 1,500 miles away.

In Bahrain, the U.S. has the U.S. Naval Support Group/Base for the Fifth Fleet and is the primary base for naval and marine actions in Iraq, Syria, Somalia, Yemen and the Persian Gulf.

On the island of Diego Garcia, an island in which the indigenous population was forcibly moved off the island by the British, the U.S. has a U.S. Naval Support Facility provides logistic support for the US Air Force and Navy to operational forces in Afghanistan, the Indian Ocean and Persian Gulf including up to twenty pre-positioned ships that can supply a large armed force with tanks, armored personnel carriers, munitions, fuel, spare parts and even a mobile field hospital. This equipment was used during the Persian Gulf War when the squadron transported equipment to Saudi Arabia.  The United States Air Force operates a High Frequency Global Communications System transceiver on Diego Garcia.

In Afghanistan where the United States has had military forces for almost sixteen years from October 2001, the U.S has still has 10,000 military personnel and approximately 30,000 civilians working on 9 bases.  https://www. washingtonpost.com/news/ checkpoint/wp/2016/01/26/the- u-s-was-supposed-to-leave- afghanistan-by-2017-now-it- might-take-decades/?utm_term=. 3c5b360fd138

Our coalition of peace groups in the United States will continue to work end U.S. military bases in other people’ countries as we work for a peaceful world not threatened by the United States.

About the Author:  Ann Wright served 29 years in the U.S. Army/Army Reserves and retired as a Colonel.  She was a U.S. diplomat for 16 years and served in U.S. Embassies in Nicaragua, Grenada, Somalia, Uzbekistan, Kyrgyzstan, Sierra Leone, Micronesia, Afghanistan and Mongolia.  She was on the small team that reopened the U.S. Embassy in Kabul, Afghanistan in December 2001.  In March 2003 she resigned from the U.S. government in opposition to President Bush’s War on Iraq.  Since her resignation she has worked with many peace groups to stop the U.S. wars in Afghanistan, Iraq, Libya, Yemen, Syria and has been on Stop Assassin Drone missions to Afghanistan, Pakistan and Yemen,  and other missions to North Korea, South Korea, Japan and Russia.  She is the co-author of “Dissent: Voices of Conscience.”