Birgitta Jonsdottir is a member of the Icelandic Parliament and the Foreign Affairs Committee. She is also the coproducer of Collateral Murder, a documentary about the murder of civilians by US soldiers in Iraq--using footage that was released by WikiLeaks. Jonsdottir visited the US boat "Audacity of Hope" bound for Gaza early Saturday, July 2. The boat was stopped at gunpoint by the Greek coast guard Friday, July 1, and forced to move to a Military Compound in Athens. Below is her statement.

It was truly inspirational for me to speak to the people at the Boat who had just been faced with death if they would not turn back to port as ordered by the Greek Military. I managed to speak to many of the people on board who were shaken by the events the night before. Despite the setback, all of them felt determined to carry on with the mission of aid and solidarity with the people suffering in Gaza.

This project is the embodiment of hope and it is a powerful attempt to expose the humanitarian crisis in Gaza. At the boat I met people of all ages, backgrounds and colors. All of them had in common a beautiful and strong urge to take selfless action for the greater good of humanity.

To be the first Member of Parliament to visit “The Audacity of Hope” ship and to feel the gratitude from the crew and passengers made me deeply thankful. I urge fellow MP´s from Europe, especially from Greece, to pay a visit like I did. I also call upon the foreign affairs minister in Greece to show some courage, to stand up against foreign powers—in this case Israel--like his ancestors did. There is no threat within the Flotilla, only peaceful people who wish to deliver aid and friendship to Gaza.

Last year when the Israel military killed and wounded people on the first Flotilla, I was outraged. I warned that if the international community accepted attacks of this kind in international waters, then who would know where the Israelis would go next? It is hard to imagine that the Israel government has managed to let the Greek government do their dirty work for them in Greek waters. If this is allowed to continue, I shudder to think what they will do next.

None of the people I met at the boat on Saturday could be classified as a threat, except that they threaten to expose the illusion that war is peace.

I pledge full support to the Freedom Flotilla 2011 and call upon other elected officials to do the same. I feel it is of utmost importance that we never forget the attacks on Gaza a few years back, and that we keep in mind who suffers the most because of the siege: the children of Gaza. 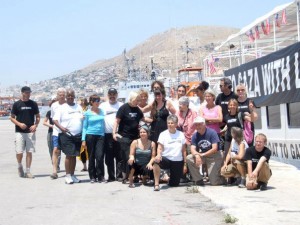 Birgitta Jonsdottir with passengers from the Audacity of Hope