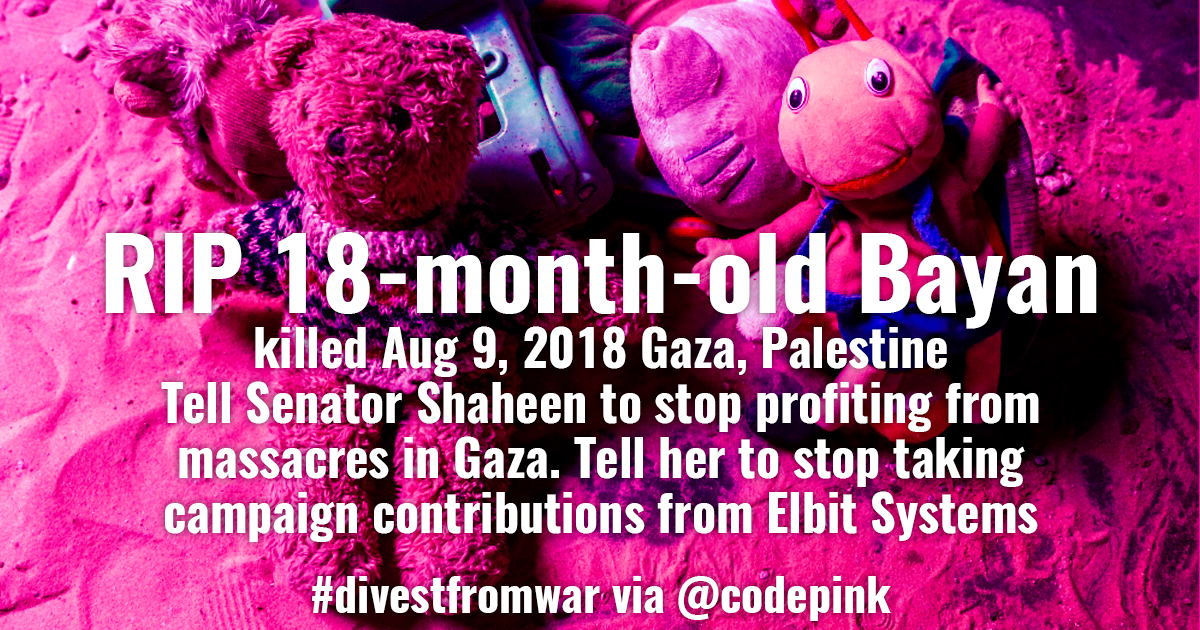 My heart is broken. Last week Israel dropped a bomb on Bayan, an 18-month-old child, and her eight-month pregnant mother, Enas Khamas. Their only crime was to be Palestinian and stuck in the largest open-air prison on earth. Bayan and Enas Khamas were asleep in their apartment when the bomb hit. They were buried the following day.

We have spent years asking the US to stop supplying military aid to Israel so that they can carry out such atrocities. This year, rather than reducing or eliminating the aid, Congress approved—and Trump just signed into law—a codification of Obama’s agreement to raise US military aid to Israel from $3.1 to $3.8 billion per year.

As we can’t at this time stop US military aid for Israel’s war crimes, we are instead going after an Israeli weapons company, Elbit Systems, for supplying the instruments of death and repression. Elbit has been involved in all of Israel’s major assaults in Gaza. They provide surveillance equipment for the apartheid wall and also secure repression on the US-Mexico border.  Democratic Senator of New Hampshire, Jeanne Shaheen accepts campaign contributions from Elbit. Join us in sending her a message: she must stop taking money from Elbit, which markets repression from Palestine to Mexico.

Israel also bombed a cultural center in Gaza last week. The building once housed dabke dance performances, children’s activities, and more. Now it is a pile of rubble.

Since 2007 Israel has held the Palestinian enclave under a total air and sea blockade. Three military assaults, the ongoing siege and a collapsing economy have left the people without electricity, medical supplies and other basic needs.

This year has seen the most violence inflicted on Gaza since the 2014 war. In addition to the recent bombings, killings and injuries are continuing to take place each week at the Great Return March protests at the separation fence. Last Friday, another Palestinian paramedic was killed.

Elbit Systems creates death and violence from Palestine to Mexico and Senator Shaheen receives the profits. Send a message to Senator Shaheen telling her to stop profiting from repression and death.

From Gaza to the US-Mexico border, together we can build a world of peace and equality.