Gyrocopter Pilot Flew for Reform, Might Land in Prison 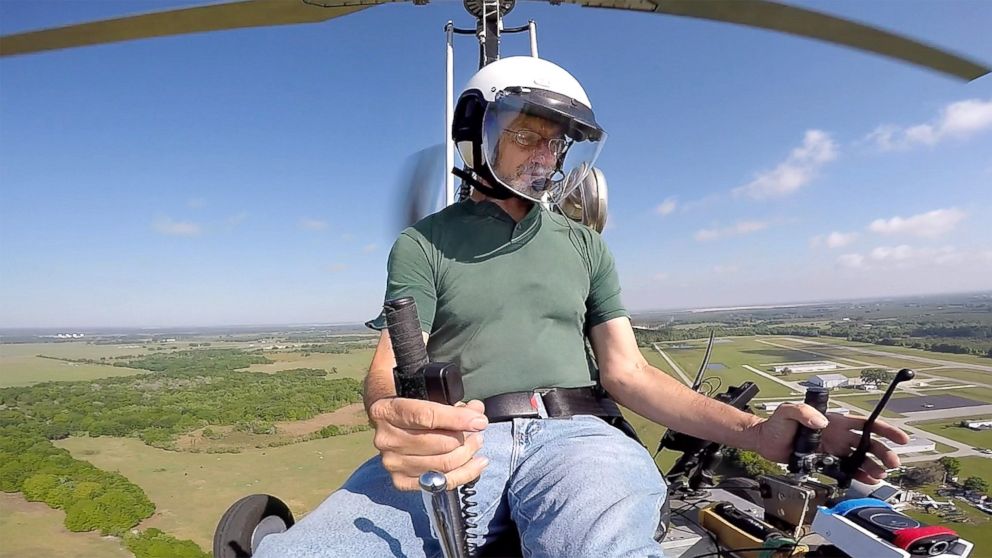 Doug Hughes, a mailman from Florida who recently made headline news for flying his gyrocopter onto the West Lawn at the U.S. Capitol Building, will be in Washington DC for his first court hearing on May 21. Hughes has been charged with operating an unregistered aircraft and violating national airspace, which can potentially land him up to four years in prison, plus fines. I had the chance to interview him about his cause of getting money out of politics.

Medea: Can you tell us a little about yourself?

Doug: I’m a mailman in Riverview, FL, near Tampa. I’m 61 years old, married, with four children. My wife, Alena (aka the warden), is the power behind the throne. She keeps up on what I’ve failed to do and puts stuff in front of me for action that I would otherwise overlook. She’s an incredible woman and how she endures what I have put her through is a marvel.

Kathy is my younger daughter, 11. She’s a spitball, fiercely defensive of her papa in the face of criticism. Think of Scout in the novel To Kill a Mockingbird.

Medea: Why did you fly your gyrocopter onto the West Lawn of the US Capitol Building?

Doug: My flight was a call to action, to spotlight corruption in DC and more importantly, to present solutions to the institutional graft. As I had informed the authorities, I had no violent inclinations or intent. An ultralight aircraft like a gyrocopter poses no major physical threat.

The real threat is an overwhelming tide of distrust for government institutions that is fueling sympathy for violent change from citizens who don’t know that nonviolent reform is an option! Real reform, nonviolent reform, has to be catapulted (or flown in a gyrocopter) to the forefront of public consciousness as a defining principle.

Medea: What is your goal?

Doug: I want to unite people, left and right, young and old, rich and poor, people who are opposed to those who subvert the cause of democracy for their personal gain. Too many people have served the cause of freedom for this generation to surrender it to the control of few wealthy men driven by greed or a lust for power. It’s our duty to restore government of the people.

Medea: Who and what has influenced you?

Doug: The first book I read after I decided to become an activist was Rules for Radicals by Saul Alinsky. Any author deceased for 40 years who could still raise the hackles on Rush Limbaugh's back is a must-read. Alinsky didn't disappoint.  I learned a lot about tactics, how to raise awareness about the nature of the monster, the reasons we must slay it, and the methods we can utilize to ensure its demise. (If the metaphor of dragon-slaying by sword is too violent for you, consider it as a radical vasectomy using a big scalpel.)

Medea: When you say “the monster”, what do you mean?

Doug: The “monster” is not just campaign finance. Ultimately, we have to address corruption, which manifests before, during, and after the service of a public official. Right now, the public is getting “service” from Congress in the same way a cow is serviced by a bull.

We need a Constitutional Amendment that reverses Citizens United and permits limits on the total amount any individual can contribute, and we need federal legislation that defines the exact limits and penalties.

The objective is to cast a net that does not hinder access or free speech, but blocks any flow of cash or rewards that would influence the mission Congress has, i.e. representing the people.

Medea: Should there also be an electoral strategy?

Doug: Yes, while I will support the overall movement, I also intend to pursue an electoral strategy of getting real reform candidates from both parties elected to Congress. This is viable if voters will realize that none of the issues they care about will be accomplished without reform first. Getting voters to understand this is possible if groups - from the AARP to Veterans of Foreign Wars - recognize that the electoral power of their membership is more than offset by the power of money in politics, and that money has contempt for seniors, veterans, and a host of other groups.

Medea: What has been the reaction to your flight?

Doug: Many people think I’m crazy, Senator Lindsey Graham, for one. But that’s ok. Most people have been tremendously supportive. I’ve received lots of messages from regular folks like me who have been inspired to take action to end corruption in Congress. I think that as a result of the flight, doors will open for me so that I can be more useful in advancing the state of humankind.

Medea: Did you lose your job at the post office because of this?

Doug: At the moment, I'm on paid leave and not allowed to work. I'm not allowed in the building without advance notice but of course being under house arrest makes that irrelevant. If I'm tried and acquitted, the US Postal Service might let me back or they might not.

Medea: What will happen at your hearing?

Doug: The hearing  will not determine anything but I expect the prosecutor will bring charges, one felony, one misdemeanor with a risk of 4 years in jail.  The judge may set a trial date at that hearing. I expect I will be released on my own recognizance to house arrest in Florida after the hearing until the court date.

Medea: Do you think your message resonates among the public?

Doug: What we need, what I want, already resonates among voters across the political spectrum. Independents, Libertarians, Liberals and Conservatives all like what I did. My role in the future, if I have one, is to be a recruiter for the greater reform movement, without favoritism for any single group or path to reform.

Medea: How likely is it that we can significantly reduce the influence of money in politics?

Doug: It's as unlikely as my flight. No, it won't work as planned. Just like my flight--a lot of things after take-off did not go as planned and I had to improvise along the way. Some of my plans will fail miserably and other avenues I haven't thought of will open up. Adaptability is key.

My flight was never intended to resolve the issue - for me it was the opening kick-off. The game has only begun for me, though others have been trying to move the ball for years. My stunt, and it was only a stunt, opened the subject for millions who have been vaguely aware and unhappy and haven't considered how they can change the score.

As for me, I'm gonna be the ugliest cheerleader you ever saw!

Medea: How can people support you?