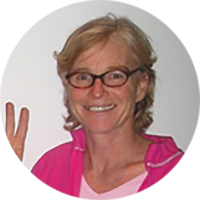 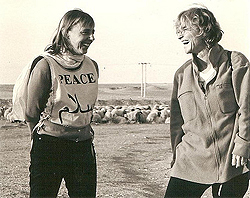 Many people have been essential to the creation and cultivation of CODEPINK as a global women's movement for peace and justice. In February, 2012, we celebrated Gael Murphy.

Gael joined the CODEPINK community during our early vigils outside the White House in 2002-2003, when we were preemptively protesting against going to war with Iraq. As documentary filmmaker, she arrived with her camera to film the very cold days of our struggle to keep the "No War in Iraq" message in the face of the White House, Congress and the mainstream media. In February, 2003, she was part of the team of 16 peace delegates who traveled to Iraq before the invasion, and Gael captured the experience of the trip and rare footage of the vibrancy of Iraq before the US invasion, later seen by thousands in the CODEPINK story.

We returned from Iraq to organize a 10,000 women in pink march to the White House for International Women’s Day, March 8, 2003, followed by an all-day gathering to plan next steps. Ten days later the US invaded Iraq. 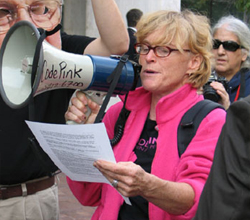 Gael continued for years to be CODEPINK's liaison with our friends in Iraq, starting the Occupation Watch Center in Baghdad to document the abuses of the U.S. invading forces. Long before the abuses in Abu Graib became an international scandal, Gael had been working with women in Iraq to document and publicize the horrible treatment of prisoners.

Gael has committed herself 500% to ending war, engaging in heroic, strategic and tireless actions daily. She was the coordinator and face of CODEPINK in DC for many years before we opened the CODEPINK House in 2007. Gael then became essential to the support of the daily actions on Capital Hill which lasted for 3 years. Gael served as the CODEPINK representative on the United for Peace and Justice board for 4 years, bringing her deep thinking and commitment to that community which she continues to hold leadership roles in. From the women vets at our Austin, TX retreat in 2006, to the wounded soldiers at Walter Reed hospital, to the human rights advocates and many friends in Gaza, Gael has a unique ability to be present with so many who have experienced the devastation of the war. Gael's depth of commitment and her capacity to connect and take the conversation deeper,makes her an extraordinary activist. 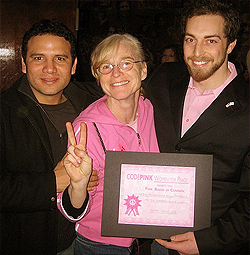 While Gael's love and commitment is focused on those suffering the brunt of failed U.S. policies, she is one of those rare activists who is also able to work within the halls of Congress. She is well respected by many members of the Congressional Progressive Caucus, and works with them on legislation to cut the funding for war and the bloated military budget.

Gael’s compassion and fierce fight for justice inspire all of us in the CODEPINK community. Gael continues to organize for peace and justice in the DC area and beyond, taking on the issues of civil liberties, the rights of Palestinians, the ongoing war in Afghanistan, the increasing use of drone warfare and the new threat of war with Iran.

We are posting this on her birthday this year to celebrate and honor her as one of the essential ingredients of the success and fabric of the CODEPINK community. Thank you Gael! Onward together.