Exclusive: Karl Rove's Next - Life As A War Criminal 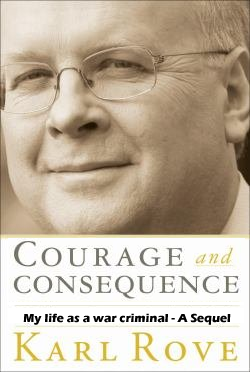 Karl Rove is getting so used to life as a criminal on the run that he has  collected enough material for a more appropriately-named sequel.

Our people recently caught him hiding out in the Borders kids section, one floor removed from protesters who freely paraded their ARREST KARL ROVE message in front of those lined up to get their books signed. Reportedly, the line dissipated an hour before the event was supposed to end.

Many people are appalled by CODEPINK hounding Karl Rove at each of his book events. We wonder why a cowardly draft-dodging war criminal cannot roam the country signing books and making money as a consequence of decisions that led to so many American soldiers and Iraqi civilians dying in an unnecessary war.

Why can't these crazy old ladies (Note: I am 25) just let bygones be bygones and continue to let our soldiers and civilians die? Surely, there must be a statute of limitations on war crimes and crimes against humanity.

Karl is so bothered by it that he cannot keep his outrage down, even on his favorite channel, Fox News. On "Fox and Friends" this past weekend, Karl lashed out when the anchor decided to ask him about his encounters with protesters:

"Please don't paint this as much a sign of anything. These are sort of sad and pathetic people. Can you imagine being some kind of nut wandering around with handcuffs? Let's not give them any more attention."

But Karl, judging by the 68,000 views on this one video of Ms. Jodie Evans trying to arrest you where you jump back and cower away, I'd say people are really interested. And the book tour seems to be going into Code Blue, which just piques our attention even more.

We'll see you on the road for the sequel Karl!