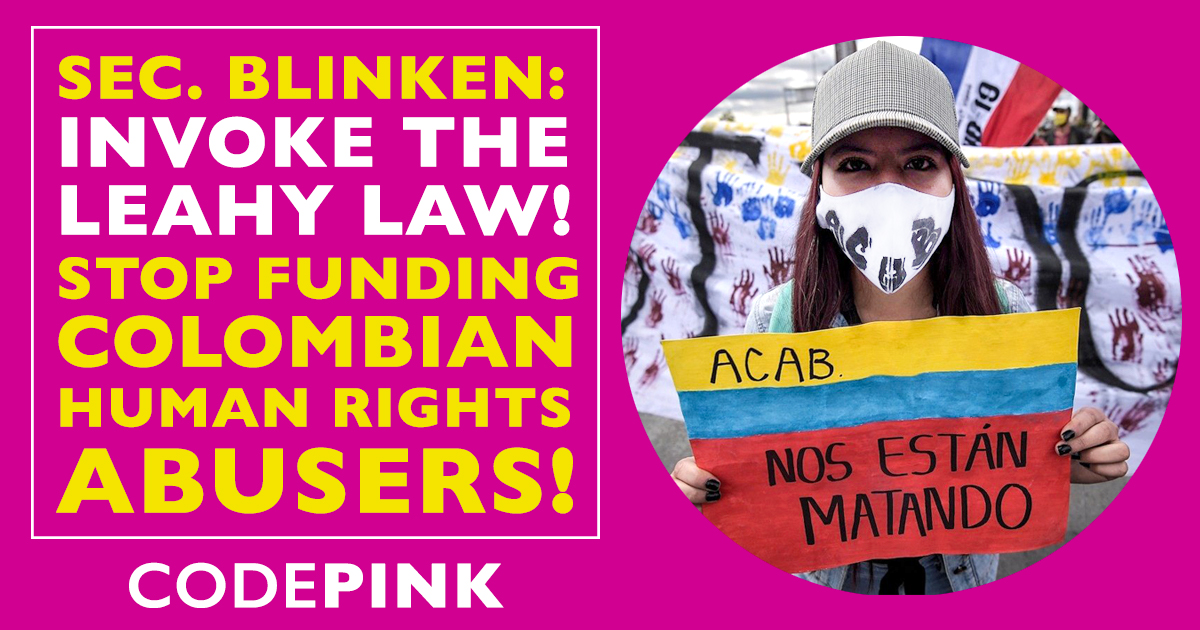 I am sure you have seen the horrifying videos coming out of Colombia since April 28. In response to peaceful protests, Colombia’s anti-riot police, the ESMAD, unleashed a brutal wave of repression that has left at least 37 people dead and 376 disappeared.

The U.S. State Department is bound by the Leahy Law to stop granting funds for assistance to units of foreign security forces where there is credible information implicating that unit in the commission of gross violations of human rights.

At this point there is no doubt that the ESMAD has committed such violations. There is evidence of extra-judicial killings, disproportionate use of force, torture of detained protesters, tear gas being deployed against peaceful crowds, and sexual assault against women protesters, among others. There are also disturbing allegations that police set fire to a building sheltering protesters and that police fired on protesters from helicopters.

The Leahy Law grants an exception if the government in question is taking effective steps to bring the responsible members of the security forces unit to justice. In Colombia, no such steps are currently taking place. In fact, declarations by President Iván Duque and former president Álvaro Uribe suggest that police forces will not be held accountable. Even worse, both of these leaders are attempting to criminalize the protesters.

President Duque said “the men and women who wear the uniforms of the Armed Forces or Police embody our democratic values” and insisted that protesters would face the “full force of law” for their “vandalism, terrorism and violence.” In a since-deleted tweet, former president Uribe said: “Let’s support the right of soldiers and police to use their firearms to defend their integrity and to defend people and property from criminal acts of terrorist vandalism.”

House Foreign Affairs Committee Chairman Gregory Meeks recently tweeted support for the invocation of the Leahy Law with regards to funding the ESMAD. “It is imperative that [the] U.S. Leahy Law is fully implemented as we make clear that the United States will not support security forces involved in severe human rights violations,” he wrote.

We support this call from Representative Meeks and urge you to apply the Leahy Law and cut off funds to Colombian police forces. Our tax dollars should not be used to commit human rights violations. This will send a clear message to Colombia’s authorities that these atrocities will not be tolerated.