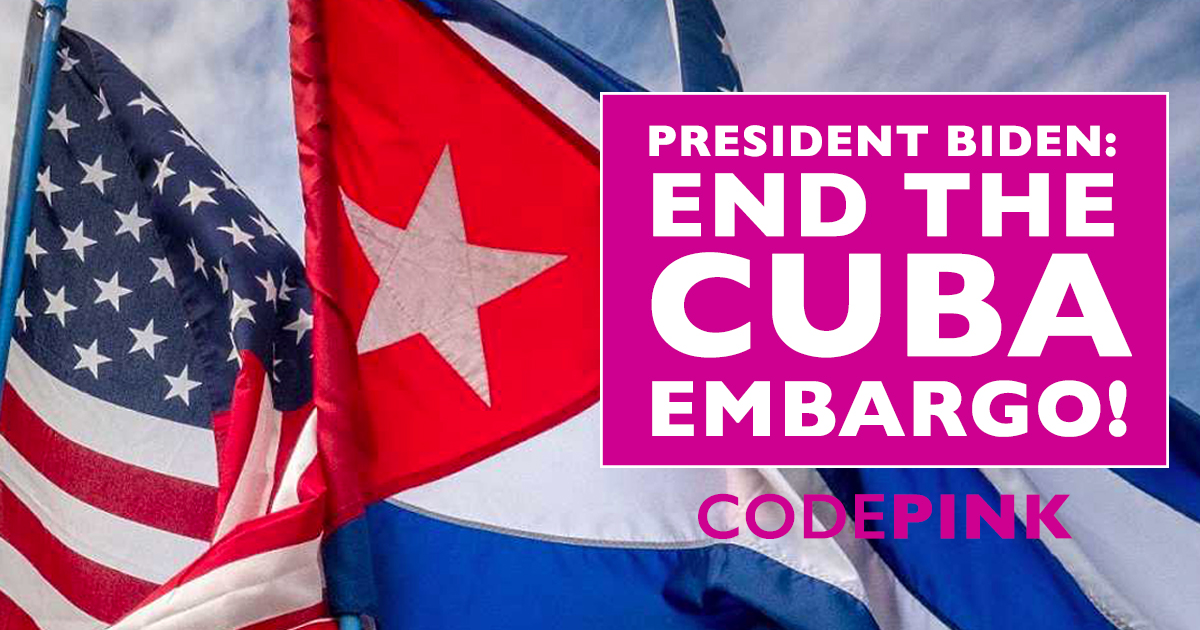 Every year, the United Nations General Assembly overwhelmingly approves a draft resolution to end the embargo imposed by the United States on Cuba. Every year, the U.S. ignores the world and continues its cruel policy of punishing the Cuban people.

Sign the petition demanding President Biden to abstain at the June 23 UN vote and announce his intentions to normalize relations and lift the blockade!

We are writing to express our concern that your administration has yet to take steps towards normalizing relations with Cuba, despite the fact that most of the previous administration’s policy changes can be reversed with a single executive order. On June 23, the UN General Assembly will vote to condemn the United States’ embargo on Cuba and call for it to be lifted, as it has done consistently since 1992. We urge you to take the opportunity created by the upcoming vote -- an event that typically leaves the U.S. isolated, harming our credibility -- to follow President Obama’s example by abstaining from the vote and to use the occasion to announce the measures your administration is taking to normalize relations with Cuba.

As you are aware, during President Trump’s time in office, he reversed the gains made by the Obama-Biden administration in normalizing relations with Cuba, adding over 200 restrictive measures. Rather than suspending any of these cruel restrictions on a humanitarian basis due to the pandemic, Trump imposed dozens of additional restrictions or tightened existing ones, severely affecting the wellbeing of the Cuban people and the ability of their loved ones to help them.

We greatly appreciated your pledge as a candidate to reverse many of the Trump administration’s policies towards Cuba, and were greatly encouraged by your administration’s announcement of a review of “economic sanctions to evaluate whether they are unduly hindering responses to the COVID-19 pandemic.” But so far, your administration has not taken steps to reverse these harmful Trump policies, which continue to harm millions of innocent Cubans.

The upcoming UN vote calling for an end to the US economic, trade, and financial embargo against Cuba risks damage to the U.S. leadership and credibility at a time when your administration has sought to reaffirm the US role in the global community. The resolution will include language opposing the embargo’s extraterritorial application, which has impaired the ability of even third country humanitarian efforts to supply medical assistance to Cuba in the middle of a pandemic. It will also denounce the embargo’s extraterritorial sanctions regime that blocks trade with third countries by imposing huge fines of billions of dollars, including on European banks, for assisting customers with non-military, purely commercial trade with Cuba.

In 2016, the Obama administration broke with 25 years of United States’ opposition to the resolution by abstaining on the UN vote, showing the world that the U.S. understood the need to lift the embargo. We call on you to follow President Obama’s lead by not opposing this year’s U.N. resolution, and instead to use the occasion to announce the measures that your administration will take - consistent with your pre-election promises and the results of your review of the impact of sanctions on COVID-19 response -- to provide relief for the Cuban people and return to the path of normalization in our relationship with Cuba.