Ramah Casers is an Egyptian mother and graphic designer who lives in Cairo. On Tuesday, November 27 she was standing at the entrance to Tahrir Square holding a simple, hand-written sign that read, “I am an Egyptian citizen and I will not let my country become a dictatorship once again.” She had come to the plaza with her young daughter, who was proudly helping to hold the sign. “I was in this same Tahrir Square during the revolution that toppled Hosni Mubarak but I haven’t been back since then,” Ramah told me. “I didn’t think any of the mobilizations called during the last two years were that critical. But for this one, I had to be here. This is about the life or death of our revolution.”

Ramah was one of the hundreds of thousands of people filling Tahrir Square to protest the decree issued five days earlier by President Morsi giving himself power to make decisions that could not be challenged by the judiciary.

The decree came just one day after the November 22 Gaza ceasefire agreement between the Israeli government and Hamas, an agreement brokered by Morsi that sent his international prestige skyrocketing. Perhaps the president deemed this a good time to make a move. After all, the transitional process had been dragging on for almost two years and Morsi found himself in pitched battles with both the judiciary branch and his political opponents. The democratically elected lower house of parliament and the first constitution-drafting committee had been dissolved by court orders, and there was speculation that the courts would soon try to disband the upper house of parliament and the Constituent Assembly, the body that is writing the nation’s new constitution. There has also been considerable political opposition to the Constituent Assembly. Many accused Morsi of stacking it with Islamists who had no expertise in constitutional law, leading a number of members to withdraw in protest. 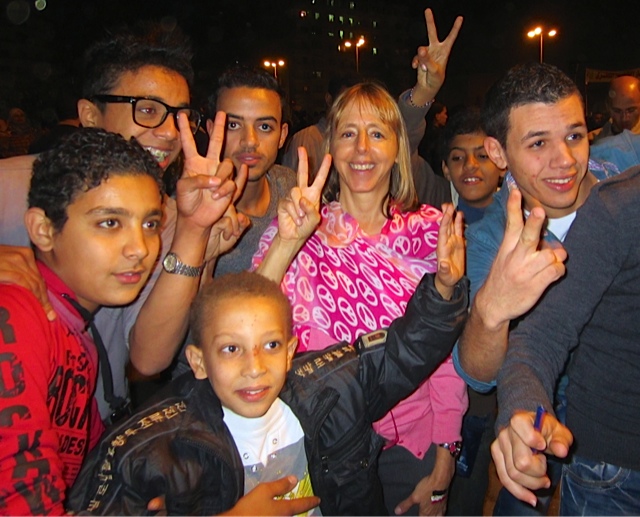 Morsi’s declaration was a complicated one, as it included some positive things for Egypt’s revolutionaries. It removed the unpopular Prosecutor General who was a Mubarak-era holdover and opened up the possibility for the retrial of recently acquitted officials implicated in violence against demonstrators. But outrage was sparked by the proviso that all presidential decisions be immune from judicial review until the adoption of a new constitution.

The president’s insistence that this measure was merely temporary was not reassuring, especially to many of the nation’s lawyers. “This is not about whether you like or trust Morsi; it’s about basic democratic values. We can’t allow a precedent that puts inordinate powers in the hands of a single individual and relieves him of all judicial oversight,” said Cairo attorney Khalid Hussein.

The opposition mobilized immediately. Some headed straight to Tahrir Square to begin a camp out and on Tuesday, merely five days after the decree had been issued, the people responded with a mass mobilization.

Some of those flocking to the plaza had been opposed to Morsi from the beginning. “I was always wary of the Muslim Brotherhood,” one young man wearing a Che Guevara t-shirt told me. “I never wanted to see our society being run by a bunch of religious people. But they were more organized that we secular folks were, and they outmaneuvered us.” Others had no problem with Morsi or the Muslim Brotherhood until this latest power grab. “I didn’t vote for Morsi but I supported him as the duly elected president in a process that I considered the first free and fair election in my lifetime,” said Ahmed Mafouz, a 50-year-old engineer who was in the square with his wife. “But this move makes me think that he wants to become another Mubarak, and I just can’t let that happen.”

While many in the square were chanting “Morsi must go,” Mafouz was more moderate in his demands. “I don’t say that he has to leave power, but he has to rescind this decree that would give him dictatorial powers, and show that he will represent all the people, not just one sector,” said Mafouz.

“The ability of the Egyptian people to mobilize in this post-Mubarak era is astounding,” said Tighe Barry, an American with the peace group CODEPINK, as he looked around at the huge crowd that had packed the square so tightly you could barely walk. “I was in Egypt under Mubarak. In those days people were brutally beaten and thrown in jail for simply protesting. Now they come out en masse—young, old, men, women, religious, secular. It’s like a human tsunami.” Most people in the square did not seem connected to a political party; they gathered as individuals who felt a real stake in their country’s future. “This is a living revolution, a world-class example of grassroots democracy in action,” said Barry. “The world has much to learn from the Egyptians.”

During the revolution almost two years ago, those protesting in Tahrir Square were putting their lives at risk. The plaza was ringed by military tanks. Police, mostly undercover, were beating people up at the entrances to the square. Tear gas, rubber bullets and sometimes live ammunition from snipers atop buildings left many dead and injured. The government even sent thugs on camels racing through the packed square, crushing and terrifying the crowd.

Now, there was not a policeman or a soldier in sight. The square belonged to the people.

But the recent gathering had been threatened with a difference kind of violence—clashes between pro- and anti-Morsi supporters. During the week several headquarters of the Freedom and Justice Party, the Muslim Brotherhood’s political arm, had been set on fire and a young Brotherhood member was killed. Deepening the tensions, the Muslim Brotherhood had called for a pro-Morsi rally on the very same day as the opposition rally. At the last minute, they wisely decided to cancel it to avoid further violence.

Despite a few minor clashes, Tuesday’s mobilization had a festive atmosphere, with fiery speeches, drumming and chanting, while vendors hawked everything from Egyptian flags to baked sweet potatoes. People pitched tents all over the square, determined to make this an ongoing protest.

While clashes with pro-Morsi forces had been avoided, there was a group in the square who did not feel safe: women. Some of the women complained bitterly about being groped and harassed by young men. “When we were in the square during the revolution this was the safest place for women in all of Egypt, in terms of harassment from the men,” a young student named Nada Bassem told me. “Women even slept in the square without problems; everyone took care of each other. Now, this can be a dangerous place for women.” While there was a decent representation of women during the day, as the night wore on, few remained. “We’ve got a lot of work to do to make this square—and all of Egypt for that matter—safe for women,” Nada insisted.

Another issue casting a pall over the entire political scene is a miserable economy inherited from the Mubarak regime, one that has only worsened since the revolution. The chaos of the uprising dried up the flow of tourists, previously a considerable source of income, and many foreign investments. The country faces a massive budget deficit, crumbling infrastructure, soaring unemployment and rapidly declining foreign currency reserves. News of the decree and pictures of subsequent protests sent the stock market tumbling to its lowest rate since the revolution. And a controversial IMF deal that will probably lead to significant price increases could spark much more massive—and perhaps violent—protests.

But those gathered in Tahrir Square seemed steeled for the task ahead. “Don’t discount this country or this revolution,” said a young protester as she took a breadth from leading a cluster of protesters in boisterous anti-government chants. “We put Morsi in power and if we have to, we will take him out. We have people power and we will make this nation the greatest democracy on earth.” The crowd roared in approval.