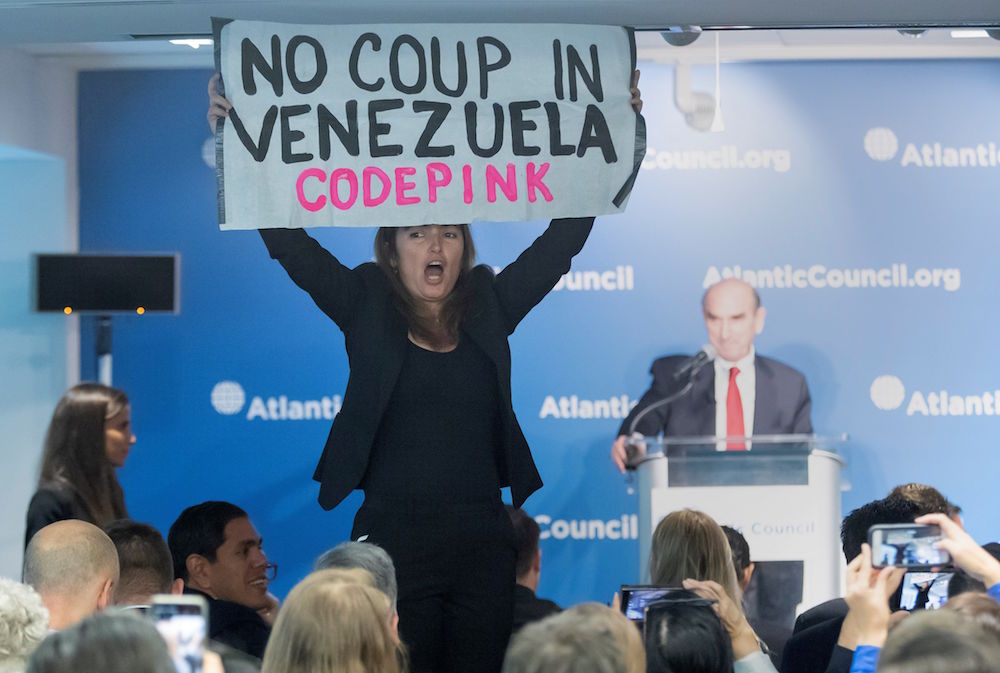 Elliott Abrams, the U.S. State Department Special Representative for Venezuela, delivered the keynote speech at the Atlantic Council's event "Venezuela After Maduro: A Vision for the Country's Future."

Following are several clips of what Abrams had to say, followed by our  commentary. The best part of the event occurred when the brilliant CODEPINK activist, Ariel Gold interrupted the vicious neo-conservative at 25:38:

Abrams had no choice but to pause while the truth was spoken.

Abrams (in quotes)  "Venezuelans deserve to hear our views not only about today’s Venezuela but also about tomorrow’s… Very few countries have ever seen such a political, social, and economic calamity befall them after decades of democracy and prosperity."

CODEPINK:  Whatever calamities the brave people of Venezuela are experiencing are largely the result of economic sanctions imposed by the US with the intention of strangling the Venezuelan economy. Economic sanctions are akin to warfare.

Abrams says when he first began work in the region almost 40 years ago,   "Venezuela was one of only two democracies in Latin America… and it was the

richest nation in the region… It was not only the birthplace of Bolivar but a beacon of his ideals."

CODEPINK:  The eradication of democracy, transparent governance, and human rights throughout Central and South America are the direct result of US intervention.

Abrams had the audacity to claim, "The current state of affairs is not normal for Venezuela, it is not acceptable for Venezuelans, and I am absolutely convinced it is not Venezuela’s destiny.”

CODEPINK: If this dangerous man’s vision of Venezuela’s destiny is realized, we fear the resulting violent coup and bloody civil war.

Abrams says he envisions that the everyday lives of its citizens could be improved “with a stabilized currency, reliable power, clean water, connectivity without censorship, and other developments.”

CODEPINK: Abrams is referring to the resulting reality for the top 1% of Venezuelan society.

Abrams tramples on hallowed history by invoking Bolivar, "…That (vision of) Venezuela is not a mirage and will not take a miracle. It is rooted in the optimism of Bolivar, that ' a people that loves freedom will in the end be free' That future Venezuelan society will have room for the full participation of every citizen."

CODEPINK: The irony here is difficult to stomach. We are currently residing in the Venezuelan Embassy where many of the walls are adorned with portraits of Simón Bolívar and the library shelves are filled with books of his writings. Bolivar, El Libertador, also said, “The United States appear to be destined by Providence to plague America with misery in the name of liberty.”

Abrams said, "billions…will be invested in Venezuela" it will take "years of steady work" to "bring the country back to where it stood decades ago." Oil reserves & skilled citizens give "strong reason for optimism."

CODEPINK:  Abrams provides part of the reason behind US meddling – oil reserves.

Abrams said, "Maduro was selected as president of the PSUV by a very small group of self-interested individuals who… continue to have access to all the food and medicine they want… While Venezuelans struggle to buy harina pan and chicken to make a reina pepiada. (The PSUV is the Partido Socialista Unido de Venezuela, or the United Socialist Party of Venezuela.) Abrams continued, "We believe the Maduro regime must come to an end for Venezuela to recover democracy and prosperity. But like all of the country’s citizens, the PSUV is entitled to a role in rebuilding your country."

CODEPINK:  Who is Elliott Abrams to say whether or not the PSUV is “entitled to a role”?

Abrams said the US "will not pick who is elected president in Venezuela."

CODEPINK:  Abrams is actually correct on this account! The US is attempting to install Juan Guiado as President without an election.

Regarding the military, Abrams says "Venezuelans deserve to be protected by a professional military… and not have their leaders rely on armed gangs or on foreign powers… to surveil, abuse & imprison patriotic Venezuelan military officers and enlisted men and women."

Regarding the economy, Abrams claimed, "Decisions about the economy cannot be made by one man or a small group whose goal is to steal resources, reward sycophants, and above all use money to stay in power."

CODEPINK:  This is precisely what Abrams is intending to do.