De-Funding the World Health Organization: Unethical, Cruel, and Dangerous for the World 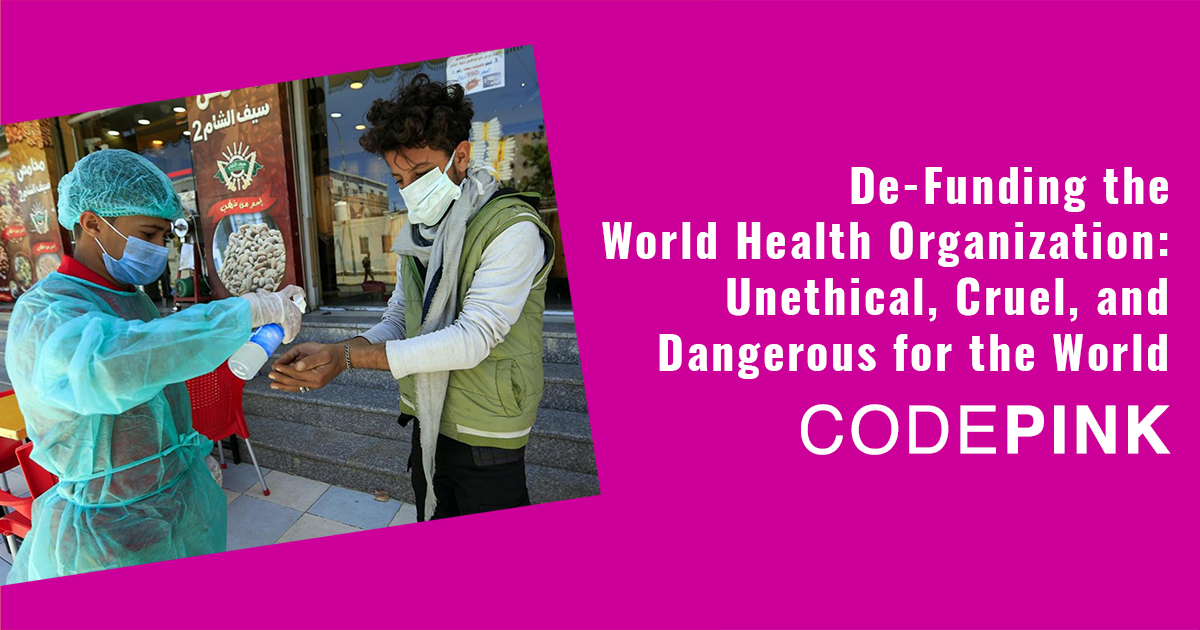 Just when we thought things couldn’t get any worse than a global pandemic that has reached all corners of the earth, infecting over 2 million people and killing over 142,000 — over 31,000 so far in the U.S. — President Trump has announced that the U.S. will suspend all funding to the World Health Organization.

Trump’s reasoning — supported by such Republican Senators such as Tom Cotton and Todd Young — is that China has too much influence over the WHO, that the WHO failed disseminate accurate information to governments in the early stages of the COVID-19 crisis, and that the U.S. is best positioned to address the crisis on its own without global cooperation. This is wrong and dangerous not only for the U.S., but for the entire world. For countries whose COVID-19 responses are already crippled by U.S. sanctions and U.S.-supported wars, it is especially and unimaginably cruel. According to Richard Horton, editor of the prestigious medical journal The Lancet, it is “a crime against humanity” and healthcare providers, scientists, and everyday citizens must “rebel against” it.

Despite the attacks by President Trump, the WTO has been providing daily COVID-19 supplies, guidance, and support to its 194 member states.

On February 24, as Italy was seeing clusters of cases in the north, the WHO brought a team of experts from its organization and the European Centre for Disease Prevention and Control (ECDC) to assist the country in understanding the novel deadly situation and limiting further human-to-human transmission.

One of the reasons the Trump administration might be so unhappy with the WHO is that it works with ALL countries, including those that are not allies of the United States.

Long before COVID-19 entered Iran, U.S. sanctions had already devastated the country’s economy, including its healthcare system. An October 2019 Human Rights Watch (HRW) report outlined how “banks and companies around the world [had] to pull back from humanitarian trade with Iran, leaving Iranians who have rare or complicated diseases unable to get the medicine and treatment they require.” Without being able to obtain medicines to treat such illnesses as epilepsy and cancer, the WHO was especially vital as COVID-19 reached Iran.

On March 5, 2020, when Iran was one of the most infected countries in the world, a team of WHO experts traveled for five days of extensive meetings and field visits to advise on scaling-up testing laboratories, contact tracing, and centers to care for patients recovering from the virus which could lift some of the burden off of hospitals. The mission concluded with Iran receiving enough kits to test at least 110,000 people, as well as seven tons of personal protective equipment and other medical supplies.

Far before COVID-19 existed, Venezuela — also under crippling U.S. sanctions — already was without sufficient medical equipment and medicines. As a result of the failed U.S. coup attempt that falsely claims that Nicolas Maduro is not the legitimate president of Venezuela, when the COVID-19 pandemic breached their borders and they asked for a loan to help battle the virus, the International Monetary Fund refused. Thankfully, the WHO (as well as China and Russia) have provided the embattled country with medical supplies and technical assistance. "We thank the WHO, who has confirmed that it will provide help to Venezuela as we are in a special condition. We are a country, illegally sanctioned, criminally blocked," said Venezuelan Vice President Delcy Rodriguez.

Far before flags were being raised that the coronavirus would reach Yemen, the WHO was busy helping Yemen cope with the worst cholera outbreak in modern times, brought on, to a large extent, by the U.S.-supported Saudi bombing campaign and military blockade of the country’s main port. On April 6, 2020, The WHO and World Bank’s International Development Association (IDA) announced that they were working together to scale up efforts to help Yemen prepare for an inevitable COVID-19 outbreak.

Like Yemen, Gaza is dealing with COVID-19 while under military blockade. After almost 13 years of siege and recurring Israeli military attacks, 97% of the water in the enclave is now unfit for human consumption and electricity so scarce that hospitals have to rely on generators. The territory has only 2,500 available hospital beds and 87 ventilators for its population of two million people.

As of April 6, 2020, 13 cases of COVID-19 had been confirmed in Gaza, but only 1,495 people there have been able to obtain a test. Despite Israel bragging about supplying hundreds of testing kits, on April 8 the Gaza Strip announced that it had run out. Thankfully, on April 13, they were able to resume testing thanks to the WHO, which got another 500 kits into the enclave. The WHO is also part of an inter-agency Risk Communication and Community Engagement (RCCE) plan to disseminate information about the COVID-19 crisis across various communication channels in Gaza.

While Italy, Iran, Venezuela, Yemen, Gaza, and the leaders of too many other countries to count have welcomed COVID-19 help from the WHO, Trump has not — and it hasn’t worked out so well for the U.S. people. By the end of February 2020, while the WHO had shipped testing kits to almost 60 countries around the world, the U.S. had refused their German designed tests. Initial U.S. Centers for Disease Control COVID-19 tests produced inconsistent results and new test packages with new chemical reagents had to be reshipped, but still the U.S. refused the WHO tests, even as a temporary stop-gap measure. When U.S. states, trying to cope, developed their own tests they had to wait for emergency approval from the Food and Drug Administration, causing even further delays and even further spreading of the virus. Today, despite the false claims by Trump that, “everyone who wants a test, can get a test,” the U.S. supply remains shamefully short.

As of today, April 16, 2020, the U.S. is only managing to test about 100,000 people per day. Yet for the U.S. to get its COVID-19 crisis under control, studies say that from 5-35 million people will need to be tested per day. Those tests will need to be repeated every two weeks for most people and every single day for the 10 million people working in front-line occupations. How Trump thinks he will be able to reopen parts of the American economy by May 1 without triggering new spikes in cases and deaths is as baffling as the thought that the world — including the U.S. — will be able to get a handle on COVID-19 without help from the WHO.

While many developed countries, such as Iceland, Germany, and South Korea, have succeeded in keeping down or significantly lowering their COVID-19 cases and deaths through testing great proportions of their populations, the U.S. has soared to become the world’s leader in confirmed COVID-19 cases and fatalities, as well as devastating unemployment numbers. This achievement is certainly not what Trump meant when he said he would make America number one again.

One shouldn’t be so surprised that America’s go-at-it-alone approach to developing a COVID-1 test turned out in disaster. While the U.S. allocates over $750 billion for military spending, ony $11 billion goes to the CDC. In September 2019, just three months before the first reports of COVID-19 came out of Wuhan, China, Trump decided to end the U.S. program charged with hunting down viruses that spill over from animals to humans. Since coming into office in 2017, he has eliminated more than two-thirds of the CDC and the National Institutes of Health staff operating inside China, closed the U.S.’s National Science Foundation office in China and removed both the CDC’s epidemiologist formerly embedded in China and Department of Agriculture’s manager of an animal disease monitoring program.

Given the woefully inadequate state of U.S. COVID-19 testing and its frightening rates of confirmed cases and deaths, the U.S. is in dire need of WHO's help. Blaming the WHO and further isolating itself is precisely the opposite of what is needed for both U.S. and global safety.

Trump’s decision to cut funding to the WHO fits into the long list of international treaties, accords and global institutions his administration has abandoned, or broken, including tearing up the Iran nuclear deal, cutting funding to UNRWA, and exiting the Paris Climate Accord, the U.N. Human Rights Council and the Intermediate-Range Nuclear Forces Treaty. These horrific decisions, as well as the sanctions, embargoes, and trade barriers that Trump has either implemented or increased since coming to power, have distanced the U.S. from global cooperation.

COVID-19 has shown just how deeply interconnected people are. Now is precisely the time to be increasing global cooperation, not cutting funding to the WHO. As there is little cause to hope that Trump will suddenly realize the necessity of global solidarity, we are left only to hang our hope right now on the Senate Foreign Relations Subcommittee on International Development and Multilateral Institutions that oversees the U.S. relationship with the WHO. Let’s demand they take action to stop Trump from adding fuel to the already raging global COVID-19 fire by cutting funding to the WHO.

Take action: Don’t let Trump cut funding to the WHO just when the U.S. and the world need the organization most!