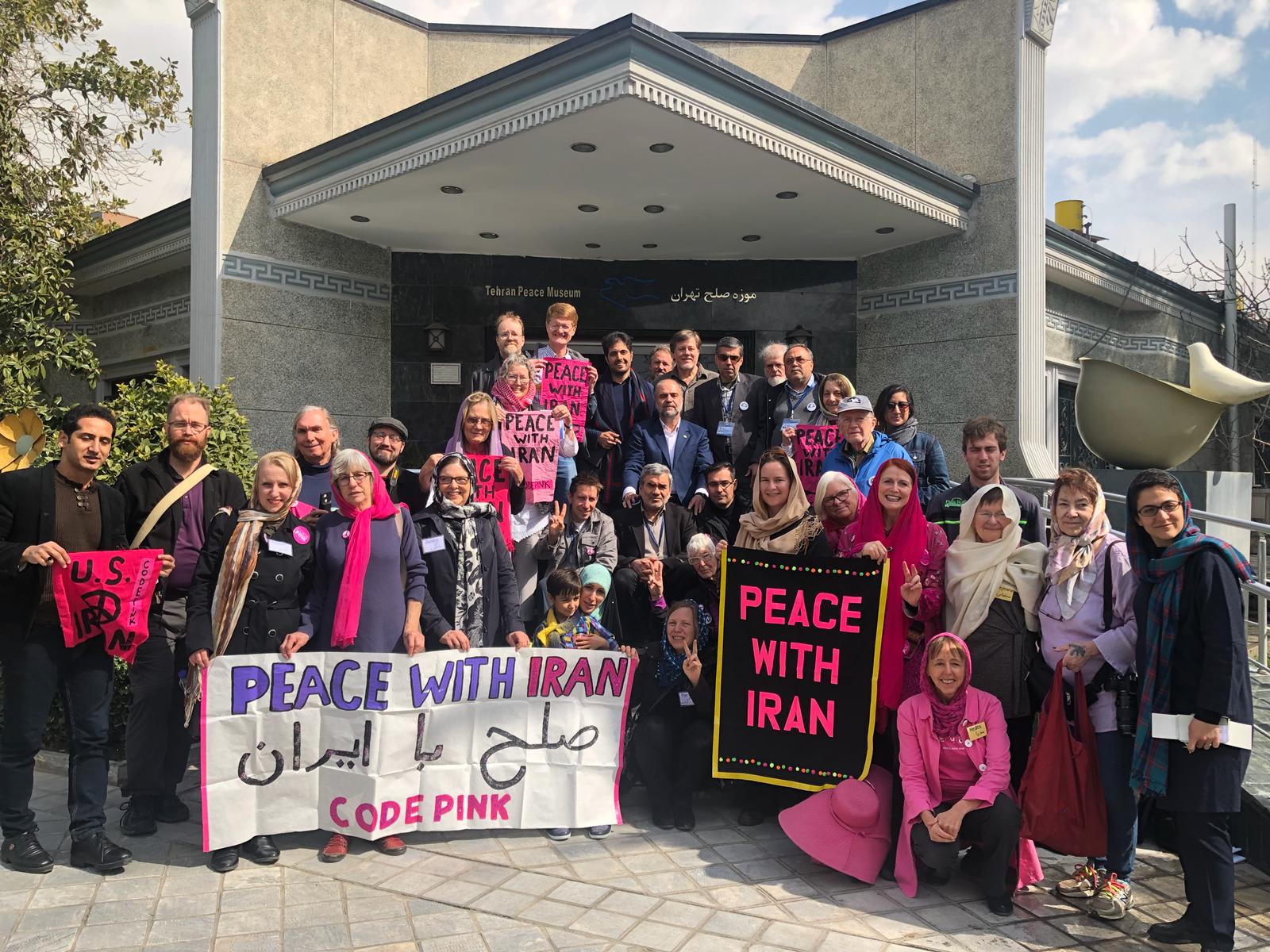 Moving Day. There were two stops as we left Tehran, The Tehran Peace Museum and the Tehran gravesite. We passed on the way to the Peace Museum the site of the former US Embassy with a sign that it is now the US Den of Espionage Museum.

Peace Museum: We were shown through rooms of displays. First room was War Room with statues of Cain, a mythical character with two snakes growing out of his shoulders that ate human brains, Hitler, and Saddam Hussein. Displays included chemical warfare, data from World War I, Guernica bombing with photo of Picasso’s painting. Each display in each room had Farsi and English explanations with photos, videos, or artifacts accompanying.

Next section was about chemical warfare and weapons: especially in the Iran-Iraq war. Described were the effects of mustard gas weapons on nerves, eyes, and lungs. Sanctions here mean eye drop medications are not available; so the man presenting this section to us uses onions to make himself cry tears after suffering eye problems from mustard gas.

We moved on to a section on a variety of weapons: nuclear, cluster bombs, landmines, and depleted uranium. Later sections were less about war.  One included a statement of a Culture of Peace written as the UN created International Peace Day – September 21. A last stop was a statement about Peace which we all read aloud together. At each stop a gentleman, most if not all of whom were veterans of the Iran-Iraq war, explained the displays and a young woman translated.  White sculpted busts of four prominent Persian poets faced the center of the circular gathering space where we made presentations.

Our primary reason for our delegation’s coming was to present a book listing the names of all 289 Iranians killed when a US warship missile shot down a commercial Iranian airliner in July 1988.  We sat in a circle in the gathering space as Barbara 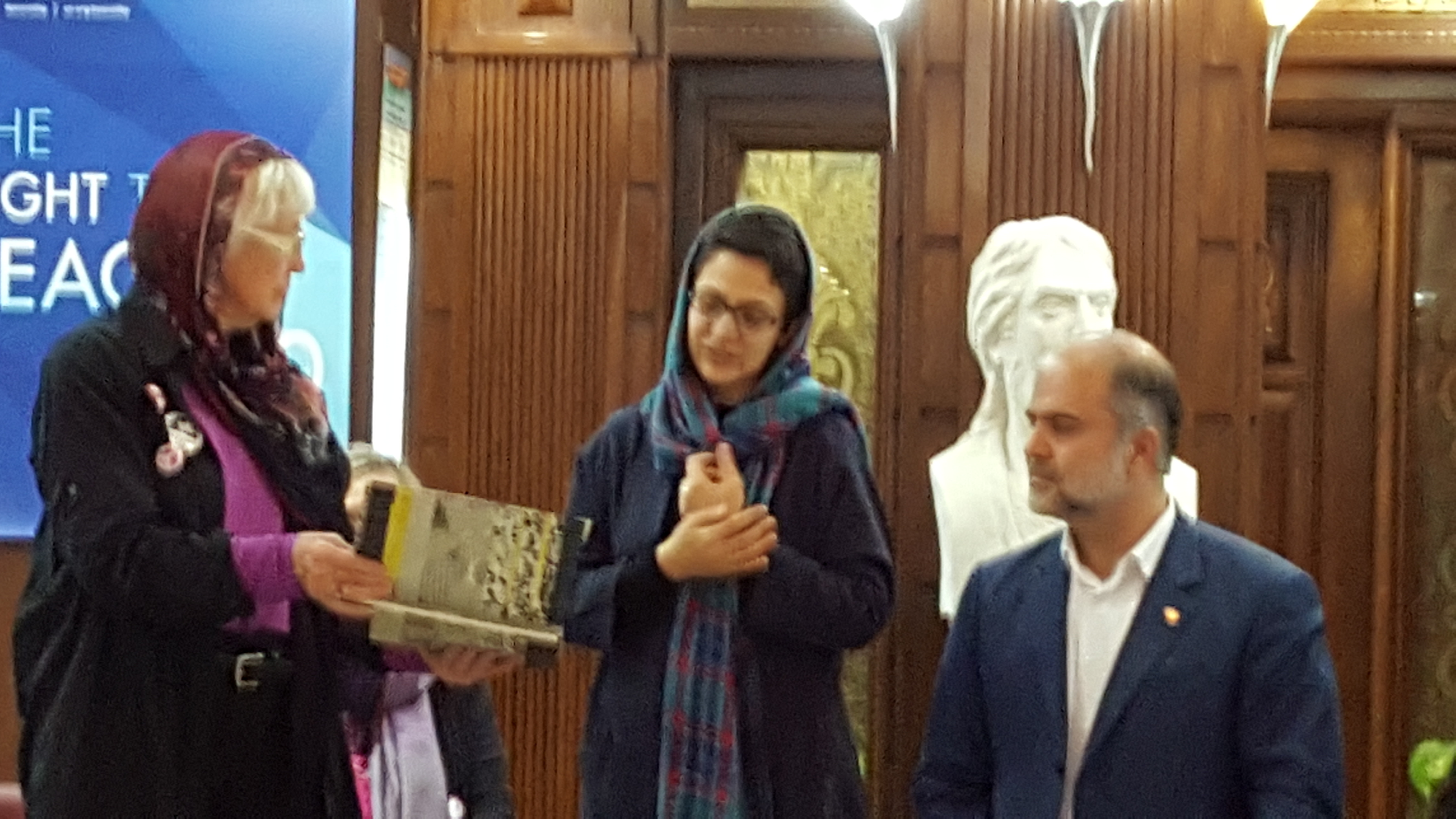 presented the book she had created. There were the individual Iranian names, some Persian poetry, and individual notes from all of us.

Rewan expressed her deeply felt sorrow and apology, as an Iraqi, for what was perpetrated against Iranians during the war. Bill and Ann gave Veterans for Peace tee shirts and I offered the DonaNobis Pacem  peace prayer in song; others joined in harmony. It was very moving for me as well as many others. The museum director, who moved in a wheelchair missing both legs, gave me an emotional hug with his handshake.

After the Peace Museum we stopped at the very large Tehran cemetery. Here are buried tens of thousands of Iranians, perhaps as many as 80,000 one of our guides told me at lunch. Every ten years a major section of the cemetery has to be dug up to create space for new graves.

There is an especially large section of headstones for Iran-Iraq war veterans, all known as martyrs, a section for the unknown soldiers killed in the Iran-Iraq war, and one for civilian casualties –mostly innocent women and children killed in the war. The gravestones of the martyr/soldiers typically had an etched as if photo of the man, his birth and death dates, plus where he was killed. And in script at the bottom portion of the gravestone is written his ‘will’ or the wish or lesson he had for others, noted in a small booklet he created and carried with him and to be shared in the event of his death.

On south in the bus. We stopped for lunch near Qom at a roadside restaurant. A member of the group bought Donald Trump’s books in Farsi – Never Give Up  and Win Like a Champion. 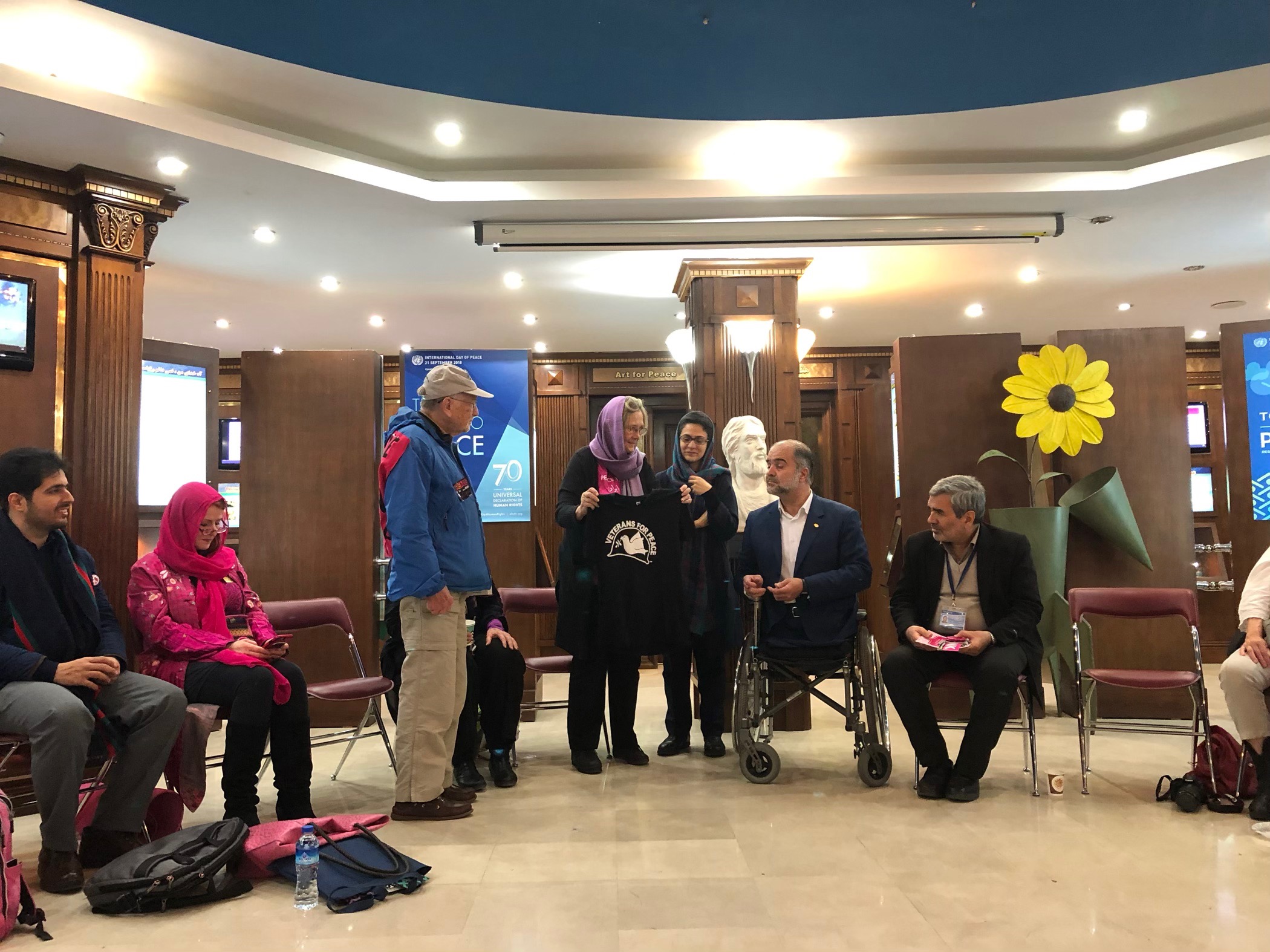 Singing at the back of the bus as we continued south toward Isfahan began with a repeat of Dona Nobis Pacem  but this time as a harmonizing four part round which we sang together many times through.  Familiar songs, many of them Peace songs enlivened the journey ending with Last Night I Had the Strangest Dream.

We arrived at the hotel and many of us walked across the adjacent bridge to restaurants across the now dry river.