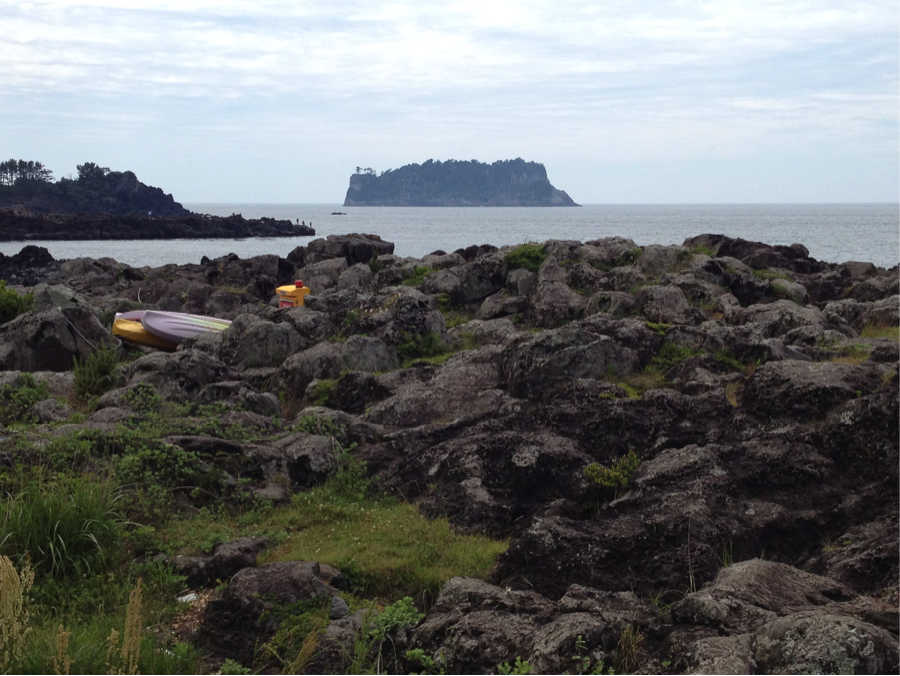 Photo by Ann Wright.  Only section of Gurombi rocks left.

The international community is extraordinarily concerned about the Chinese construction on small islands and atolls in disputed waters off China, Vietnam, Taiwan and Japan.  Over the past 18 months, the Chinese government has created islands out of atolls and larger islands out of small ones.

With the Obama administration’s “pivot” of the United States military and economic strategy to Asia and the Pacific, the Chinese have seen military construction in their front yard.

I’ve just returned from my third trip to Jeju Island, South Korea. Jeju is called the Island of Peace.  However, its where the South Korean military has almost finished construction of a new naval base, the first military base on this strategically located island south of the mainland of Korea that is littered with U.S. and South Korean military bases, leftover from the Korean war and that are a part of the U.S. “defense” of South Korea from  “aggression” from North Korea.

The naval base was built in the pristine waters off Gangjeong Village midst seven years of intense civic outrage.    The destruction of the marine environment off the village where the famous women divers for decades have harvested by hand the “fruits of the sea” is one of the cultural and economic losses the construction of the naval base has caused.

The destruction by huge dynamite explosions of a unique geologic rock formation called  “Gureombi” is a cultural and spiritual loss to the islanders.  Its tide pools, crystal clear springs and lava rock formations made “Guremobi” a favorite area for villagers and visitors to the island.

The construction of the naval base in spite of strong local opposition is a part of the history of oppression of the people of Jeju Island from the mainland government. After the Korean War, South Korean and United States military forces which conducted the infamous April 3 massacres of over 30,000 islanders who were believed to be opposed to the right wing Singman Rhee government, dissidents and sympathizers for reunification of Korea.  The April 3 “incident” left a deep scar on the people of Jeju Island and made them very sensitive to mainland government policies, particularly those which “target” them again.

The South Korean government has built the naval base in one of the most inhospitable areas of Jeju Island.  The naval base faces the open ocean and has already been battered by two typhoons which have displaced huge concrete cassions which form the foundation of the quarter mile breakwater created to protect the base from the sea.  The government attempted to put the base at two more favorable geographic locations on Jeju Island but were deterred by citizens who successfully refused to allow the base to be constructed in their part of the island.

Despite large and continuing protests in Gangjeong village against the construction of the naval base, the South Korean national government reportedly with intense pressure from the United States decided that they had to begin construction somewhere on the island and chose to ignore the strong local opposition.

Each day at Gangjeong village begins with a 7am demonstration of 100 “bows” at the front gate of the naval base.  Protesters block one lane of the base forcing a slowdown of traffic of concrete trucks and other vehicles entering the base.  For almost an hour, the demonstrators silently offer thoughts on the militarization of their island as they bow or kneel.  At 11am Catholic priests and laywomen conduct a daily mass across from the front gate as other priests and activists sit in chairs blocking both lanes into and out of the base.  Every 20 minutes, a platoon of young police men and women march into the seated protesters and carry the chair and the person sitting in it to the side of the road, opening the road for traffic for five minutes.  Then the police march back into the base and the protesters immediately move their chairs back to block the lanes into the base. After an hour of blocking the entrance, the protest ends with an energetic dance—and traffic resumes.  Long time activists recognize that the hour protest is a small delay in the construction of the base, but consider the two daily protests as extremely important actions to remind the national government of their continuing opposition to the military base.

Photo with Ann Wright’s camera.  Nobel Peace laureate Mairead Maguire, Ann Wright, Catholic sisters and other Gangjeong activists after having been lifted up and carried in chairs out of the road to allow steady stream of concrete trucks to enter the naval base.

My first visit to Jeju Island was in 2011.  At that time, activists still had their camp on the  Guremobi rocks on the edge of the ocean.  The camp consisted of a long educational tent, a sleeping tent and a cook and eating tent.  Every day activists would conduct workshops and ceremonies on the rocks.

When I returned in 2013, despite the intense efforts of the activists, the Guremobi rock formation had been blown up with dynamic and construction had begun with two huge facilities built on the remains of the rocks to create the massive concrete caissons that would be lowered into the ocean to form the quarter mile long breakwater to protect the base from the open ocean.

Returning two years later in 2015 with eight women from the Women Cross the DMZ walk www.womencrossdmz, including Nobel Peace laureate Mairead Maguire and CODEPINK co-founder Medea Benjamin, I was devastated to see the vastness of the naval base which is nearing completion.  Although statistics on the amount of concrete that has been poured into the ocean and into the buildings on the base are unavailable, the sheer scale of the base leads one to guess that a road around the world could have been built with that volume of concrete.

And its not just on the base itself that construction has proceeded.  As villagers suspected from the beginning, the base would expand into other parts of the community.  More land near the base is now being condemned by the government so it can be used to build housing for military personnel and their families.

After seven years of large protests against the construction of the military base, the base has been built—and the Chinese know it as they have watched the construction—up close—as, remarkably, the South Korean government allows Chinese tourists to visit Jeju Island without a visa.  The Chinese tourist trade is large—as is the purchase of land by Chinese on Jeju Island.  A big area on Jeju Island is now a Chinese “health” vacation area with condos and other facilities for Chinese—even the road signs in the area are in Chinese!

The Chinese are watching another construction project in the Pacific.  This time a United States military base on the southern Japanese island of Okinawa.  Despite massive Okinawan opposition, including a visit in May 2015 of the governor of Okinawa to Washington, DC, the U.S. is planning to begin expansion of Camp Schwab, a U.S. Marine Corps base and construction of an airfield runway on Okinawa.  The runway will project out into the South China Sea into pristine waters with endangered coral formations and into the habitat of the dugong, a manatee-like marine mammal.  Okinawa makes up 1% of Japan’s land mass but is the location of 74% of all U.S. military bases in Japan.

Okinawans have been protesting for years the expansion of Camp Schwab, a U.S. Marine Base.  Only last month, over 35,000 Okinawans gathered to voice their opposition to their national government’s approval of the base despite the opposition of all levels of the Okinawan provincial government and island civil society.  http://rt.com/news/259373-okinawa-protest-us-base/

In 2007, I visited the activists on Okinawa at their seaside camp where they have a daily presence to remind the U.S. military that they do not want the naval base.  The senior citizens of the village of Henoko moved their Senior Citizens center to the beach so they could participate each day in attempting to preserve their village from another military base.  (RT footage)

The Chinese have been watching the process for the building of another U.S. base in the Pacific, as they have watched the expansion of U.S. military forces on the U.S. territory of Guam.  The projected increase in U.S. military personnel and their families is expected to increase the population of the small Micronesian island by 30 percent.

In another interesting economic considerations versus foreign policy posturing between sparing countries, Russian tourists to Guam do not need a visa to the United States to visit the island.

The bottom line is that the Chinese see the expansion of the United States military forces and capabilities in their front yard and are constructing their own projections of power on the tiny disputed islands and atolls off their coast.  Neither the United States nor China need any of these bases as both have more than enough air capability in the form of aircraft or missiles to initiate or counter any military move by the other.

All of this construction is another example of the never ending, massively expensive war mindset of political leaders and their financial backers who profit from a hostile world.

About the Author:  Ann Wright served 29 years in the U.S. Army/ Army Reserves and retired as a Colonel.  She served 16 years as a U.S. diplomat in U.S. Embassies in Nicaragua, Grenada, Somalia, Uzbekistan, Kyrgyzstan, Sierra Leone, Micronesia, Afghanistan and Mongolia.  She was on the small team that reopened the U.S. Embassy in Kabul, Afghanistan in December, 2001.  She resigned from the U.S. government in March, 2003 in opposition to the war on Iraq.