Dana Milbank, Why I got Naked for Bradley Manning 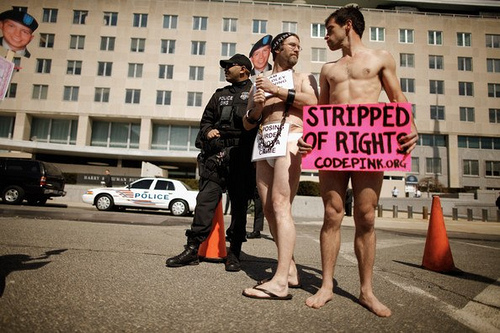 On a fifty degree afternoon in Washington, it is less than tempting to strip one’s clothes off and stand naked in the cold.  When you happen to be at the entrance to the State Department, and there is a solid line of news cameras trained on you, it is even less so. Or so I discovered.

Staring at the cameras, I had a minute to consider how I would be ridiculed by people like Washington Post blogger Dana Milbank.  But it wasn’t a very long minute.

The net contribution of people like you and I, Dana, will always be minuscule in comparison to that of Bradley Manning , who may be the most important whistle-blower if our time.  But I wanted to do my part.

Our military has sent so many of my peers - idealistic young Americans - to die painful and horrible deaths or come home wounded and traumatized from a war founded on lies.

Rather than pursue the criminals who lied over nine-hundred times to get us into Iraq, the Obama administration is bent on taking it all out on Bradley -- a shy young private who may have been the only person courageous enough to give us anything close to the full truth about these horrible wars.

Bradley Manning is being tortured in pre-trial detention.  He has lost his rights and he is constantly humiliated, denied sleep or exercise, and spends 23 hours a day in single, small cell.  “You can hear him coming,” his friend David House says, “because of the chains.”  The Pentagon’s excuse is that this is all just for Bradley’s safety-- and Obama turned around and repeated it back to us.

State Department Spokesperson PJ Crowley’s remarks at MIT—that such treatment of Manning is “ridiculous, counterproductive, and stupid”—cost him his job, but he didn’t take them back.  Crowley wasn’t a great hero of whistle-blowers-- he just didn’t like what he was seeing, and he knew a little of the human cost of torture.  So he said what nobody else around him would.

You would think that the press corps would be more helpful, but they have been strangely silent about Bradley Manning until now, and at the White House briefing the day after Crowley's resignation (while I was standing naked at the State Department) not one person asked about Crowley, his statements, or his resignation.

In the last two years, Obama has decided to prosecute more whistle blowers than all previous administrations combined.   He does so regardless of the fact that these acts push him closer to the despots that have fallen –and will hopefully continue to fall, in part thanks to WikiLeaks—to democracy in the Middle East.  And to claim that the leaks did more harm than good -- is just another stupid lie.  It is a claim, so misconstrued, that it hurts my head to think about.

It is a shame that our leaders don’t have the courage to face the hard truths of our time.   Instead, they strip Manning of his rights and leave him to stand cold in his cell, for 7 hours, naked.  When one of their own speaks out, they fire him.  Abusers project their own shadow.   Without even being convicted of a crime, Bradley is already serving the sentence of all the criminals he is blamed of exposing.

Stripping in front of the State Department on a cold day is nothing compared to that -- no matter how many cynical bloggers happen to be present.

Please Join us this Sunday at Quantico, Virginia to rally for Bradley.  Dana,  you are invited too.  I am making some signs and you can have one if you want--  It says "Whistle-Blowers protect Democracy,"  and it doesn't even have to be pink.

Logan Price is an activist based in San Francisco who coordinates the Hands Off WikiLeaks campaign for CODEPINK.  For more info and how to get involved, visit handsoffwikileaks.org.

[caption id="" align="alignnone" width="508" caption="Bradley Manning with a self made sign for LGBT Equality, before his detention."] 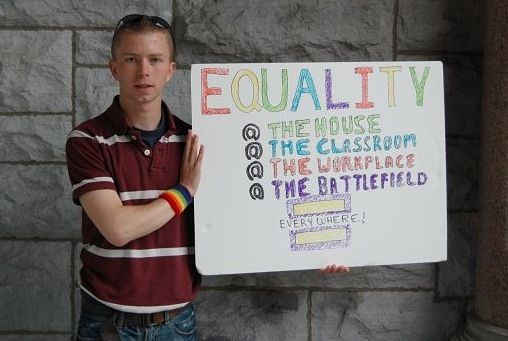