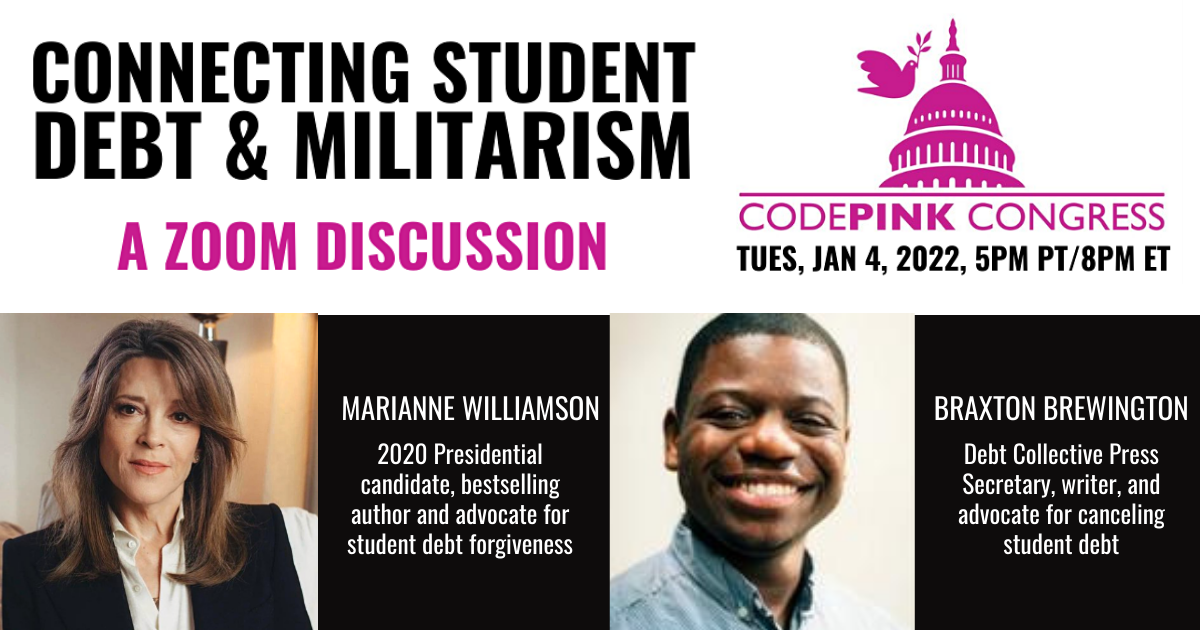 Tonight’s CODEPINK Congress guests Marianne Williamson, presidential candidate, author, activist and spiritual leader and Braxton Brewington, the Press Secretary with the Debt Collective discussed the movement to forgive student debt, and why it's a necessary part of building a strong movement against militarism.

Braxton highlighted the recruitment strategies of the military that target those who have student debt and the failed promises to cancel the debt of low income, predominantly BlPoC perpetuating the moral and systemic traps of the military industrial complex and debt. He also talked about the failed F-35 Joint Strike Fighter’s development program that has cost U.S. taxpayers $1.7 trillion. The astronomical cost of that failed program alone equals student loan debt in this country. By doing so, this would immediately increase Black wealth by 40%.

"There's so much evil here between student debt and militarism. [The US military] really use student debt as a way to trap mostly low income people, disproportionately Black & people in the US south into enlisting in the military," @Braxtonbrew96 @StrikeDebt w/ CODEPINK Congress. pic.twitter.com/IFw88uhWGS

Learn more about the Debt Collective by visiting their website and sign the petition urging Biden to use executive order to #CancelStudentDebt here.

Marianne spoke on breaking up the duopoly of the two-party system and corporation-backed politicians. With a Biden presidency “we’re still not getting any kind of serious conversations on militarism…The system is so saturated by the undue influence of these corporate forces. We need to have a non-violent revolutionary spirit at this point.”

Check out our entire conversation with Marianne Williamson, Braxton Brewington and our team here.