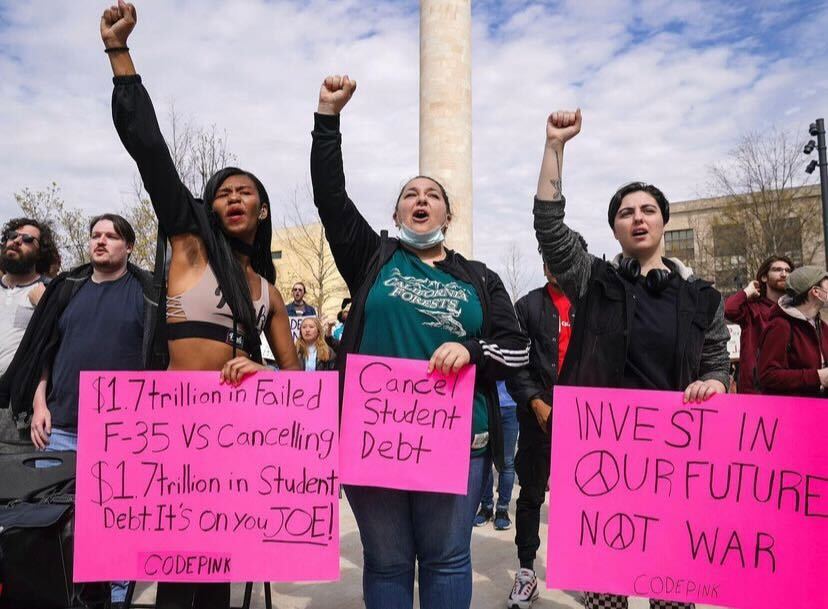 One of the most impactful moments of being there was when the organizers asked us to turn to the people around us who we don’t know and share our debt stories. Whether we personally are struggling with debt, if we have in the past, or how debt has affected the people around us. The purpose of this exercise was to help break the stigma around talking about debt, because when we deal with debt alone, it can crush us, but when we deal with debt together, we can fight back. In our everyday lives, we often avoid talking about debt because it’s embarrassing or causes anxiety, and is generally seen as a topic to avoid despite most people in America suffering from it. But the Debt Collective is working towards changing that by sharing stories about debt and how it keeps us from achieving our goals.

With the focus being on student debt, I was surprised when none of the speakers talked about how the military manipulates young people into joining the military and promising to pay for their college after, while also not following through on those promises. It’s how they trap a lot of young people, both from lower and middle income areas, into joining based mostly on the desire to come out of college debt free. In the “Future’s Survey” that the Department of Defense sends out to learn more about how likely it is that people ages 16-24 will join the military, 52% of those surveyed said it would be to pay for future education. And even after going through the military, it’s often difficult for veterans to receive the promised free education. As Kaitlin Blanchard said in this article “Student loans among veterans are more common than one may expect. The Department of Education found that 64 percent of veterans who graduated with a bachelor’s in 2016 had taken out student loans at an average amount of $27,100”. So if veterans are still forced to take out student loans, and a large percentage of those who join do it for the free education that they’re not even getting, the military is lying to thousands of people in order to recruit them.

As we marched around the Department of Education building, chanting for Biden to cancel student debt, there was a sense of hope in the air. And two days later, the Biden administration extended the student loan payment pause to August. It’s not exactly what we want, but it is a step in the right direction. Biden can and should end student debt now, and not only help the millions of people drowning in student debt, but also prevent a predatory tactic used by the military to convince people to sign their life away in exchange for the same amount of student debt.

Written by Clay Foley, student at George Mason University and a CODEPINK intern