Crises in Iraq and Haiti Expose the Failure of Militarized Neoliberalism 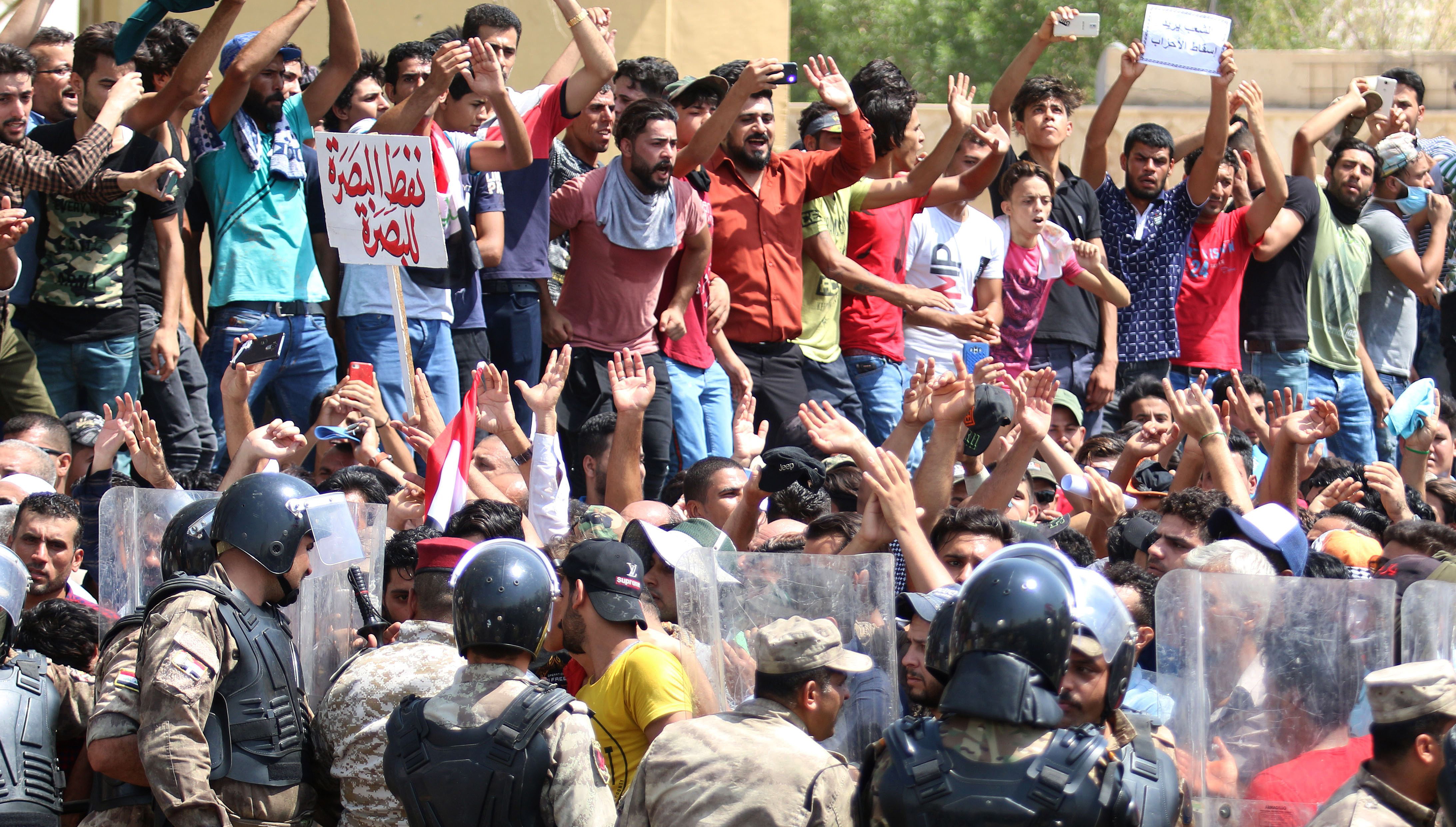 This season could be called the Autumn of Discontent, as people from the Middle East to Latin America and the Caribbean have been rising up against corrupt neoliberal governments. Two of the countries in crisis, Haiti and Iraq, are on opposite ends of the earth but have something important in common. Not only are they reeling from protests against government corruption and austerity programs, like Ecuador and Algeria, but in both Haiti and Iraq, their corrupt neoliberal governments were imposed on them by the use of U.S. military force.

In 2003 and 2004 respectively, U.S. forces illegally invaded Iraq and Haiti, removed their internationally recognized governments from power and replaced them with U.S.-backed regimes. Both countries have since been governed in line with the dominant neoliberal ideology that the U.S. and its allies have imposed on most of the world since the 1980s. The protests and savage repression in Iraq and Haiti today are only the latest evidence of the utter failure of neoliberalism and the extraordinary human cost of U.S. efforts to impose it by military force on countries that resist.

In the first week of October, more than 100 people were killed and 6,000 wounded in Baghdad, Nasiriyah and other Iraqi cities, as the Iraqi Army and police fired into large demonstrations. Young Iraqis have risen up against government corruption, unemployment and poverty that leaves them with dismal prospects, even as record oil production fills the pockets of the ruling elite in Baghdad’s Green Zone.

Meanwhile, at least 17 people have been killed in the Haitian government’s repression of protests calling for the resignation of U.S.-backed President Juvenal Moise. Public anger has boiled over into the streets as Moise faces credible charges of embezzlement and corruption. His government has utterly failed to improve the lives of most Haitians. Haiti remains the poorest country in the Western hemisphere, with a per capita GDP of only $870 per year and 60% of the population living below a poverty line of $2.41 per day.

In a Foreign Affairs article in January 2019, Senator Elizabeth Warren explained how the U.S. “began to export a particular brand of capitalism, one that involved weak regulations, low taxes on the wealthy, and policies favoring multinational corporations. And the United States took on a series of seemingly endless wars, engaging in conflicts with mistaken or uncertain objectives and no obvious path to completion. The impact of these policy changes has been devastating.”

What Senator Warren skated over, without connecting the dots, was that the real objective of those wars, coups and other regime change operations was precisely to impose the “particular brand of capitalism” she described, and, if necessary, to do so by the illegal and deadly use of military force.

While Mikhail Gorbachev dissolved the Soviet empire and made peace with the West, the U.S. exported neoliberal capitalism to Eastern Europe without needing to use its war machine it had squandered our country’s wealth for 45 years to build.

Instead, Western political and economic experts like Jeffrey Sachs fanned out across the region reciting Margaret Thatcher’s dictum that “there is no alternative” to neoliberalism. They convinced Eastern European leaders to surrender their countries and their people to the “shock therapy” of corporate conquest, privatization, drastic cuts in public services and plutocratic oligarchy, superficially legitimized by Western-style multi-party elections.

U.S. officials of both major parties, from neoconservatives like Paul Wolfowitz to “humanitarian interventionists” like Madeleine Albright, peddled the simplistic notion that the U.S. war machine could be repurposed to impose neoliberalism by force on dissident countries around the world. Twenty years on, the results of those policies have been universally catastrophic.

Even in the U.S., at the very heart of the neoliberal empire, a new generation raised on the myths of neoliberalism now rejects its absurdities: trickle down economics; the magic of the market; union-busting; privatized healthcare and education; the best Congress money can buy; the shrinking middle class; the rampant destruction of the natural world; and so on.  As British economist J.M. Keynes reportedly said in the 1930s, “Laissez-faire capitalism is the absurd idea that the worst people, for the worst reasons, will do what is best for all of us.”

But as corrosive as neoliberalism has been to working people in the U.S., it has been far more destructive wherever the U.S. and its allies have tried to impose it by military force.

In Afghanistan, after 18 years of war, 80,000 U.S. bombs and missiles dropped in U.S.-led airstrikes, and hundreds of thousands of violent deaths, the Afghan people are so disillusioned with the U.S.-sponsored  “democratic system” that only 25 percent turned out to vote in the September presidential elections, a record low. The unending violence and the unbridled corruption of successive U.S.-backed governments has enabled the Taliban to make a comeback and set up a viable shadow government across more and more of the country.

In Iraq, 16 years after the U.S. invasion, a succession of corrupt U.S.-backed governments has boosted oil production to about 4.6 million barrels per day, the second highest production in OPEC.  But in line with U.S. neoliberal orthodoxy, the profits have been pocketed by Iraq’s new U.S.-installed ruling class, not redistributed to provide universal healthcare, education, housing and other public services as they were under Iraq’s nationalist and Baathist governments between 1958 and 2003, including under Saddam Hussein’s brutal dictatorship.

Iraq was plunged back into full-scale war in 2014, as the alienated population in the north and west of the country fell under the sway of the Islamic State. The U.S. military responded with a campaign of air and artillery bombardment that destroyed most of Mosul, Iraq’s second-largest city, and many other towns and cities across Iraq and Syria, killing tens of thousands of civilians in Mosul alone.

The U.S. invasion and the unending waves of violence and chaos it unleashed have destroyed Iraq. The U.S.-imposed neoliberal model has empowered a series of corrupt governments to steal and squander Iraq’s oil wealth, while the rest of the population still struggles to recover from this unending "Made in the U.S.A." national trauma. Voter turnout in Iraqi elections declined from 80% in 2005 to 45% in 2018. Now a desperate and angry new generation of Iraqis is taking to the streets to demand a government that will finally share their country’s wealth with its people.

The tragedy of Haiti

In 2000, Jean-Bertrand Aristide, Haiti’s first democratically elected president, was elected for a second term on a platform that explicitly rejected the neoliberal “free market,” debt and austerity policies imposed on Haiti by the U.S., the International Monetary Fund (IMF) and the World Bank.

The U.S. responded to Aristide’s reelection by cutting off foreign aid to Haiti and setting up training camps in the Dominican Republic, where up to 200 U.S. special operations forces trained Haitian death squads to cross the border, assassinate Aristide’s supporters and terrorize the population.

In February 2004, these U.S.-trained death squads joined forces with a militia called the Cannibal Army in Gonaives, where they sacked the police station and took control of the city. Two weeks later, they seized Cap Haitien, Haiti’s second largest city.

As the U.S.-trained death squads threatened to march on the Haitian capital Port-Au-Prince, a U.S. embassy official and U.S. special operations forces entered the Presidential Palace and "persuaded" Aristide and his family to leave with them. A thousand U.S. Marines, plus French, Canadian and Chilean troops, invaded and occupied Haiti.

The U.S. flew Aristide to Antigua and then to the Central African Republic (CAR), where General Francois Bozize had just seized power in a Western-backed military coup. The Jamaican government rescued Aristide and his family from the CAR and brought them to Jamaica for a few months until they were granted permanent sanctuary in South Africa. Aristide was finally allowed to return to Haiti in 2011, and he is still widely seen as the only popular democratic leader Haiti has ever had.

Since 2004, when Aristide’s Fanmi Lavalas party was banned, elections in Haiti have been so obviously rigged and illegitimate that voter turnout has declined from at least 50% in 2000 (despite an opposition boycott), when Aristide won 92% of the votes, to 22% in 2011, 29% in 2015 and 18% in 2016, allowing every election to be won by openly corrupt U.S.-backed right-wing politicians and parties.

After the devastating 2010 earthquake, the 2011 election was won by Michel Martelly, a Haitian pop singer supported by Bill and Hillary Clinton. He was quickly mired in scandal over a $2.6 million bribe from a Dominican construction firm to whom he awarded $200 million in no-bid contracts for post-earthquake rebuilding work, triggering large anti-corruption protests in 2013, 2014 and 2015.

The latest election in 2016 was another fiasco. Evidence of massive election fraud triggered huge anti-government demonstrations before Jovenel Moise, the declared winner, even took office. Exit polls showed Moise only winning 6% of the votes in the first round, a small fraction of his official 33% share that won him a place in the run-off.

Now Haitian government auditors have released a 600-page report detailing how Moise has embezzled millions of dollars, mainly from the PetroCaribe fund.  Under this program, Venezuela supplied Haiti with oil but deferred payment for 25 years so that Haiti could spend the money on badly needed infrastructure, hospitals and social programs. The audit revealed how Moise siphoned millions of dollars from these funds into his own personal bank accounts.

Haiti remains under UN military occupation to this day. UN troops have used force against the public and unleashed a cholera epidemic. The UN mandate for the remaining 1,275-member UN police force, supported by about 300 Indian troops, finally expires on October 15th, when it is due to be replaced by a 30-member UN political mission.

Neoliberalism is an inherently corrupt system. It creates a vicious circle in which ruling classes can leverage their wealth to gain dominant political power and then use that power to cut taxes and rewrite laws to further enrich themselves. This is a powerful engine to generate ever more concentrated wealth and political power for the 1%, with impoverishment and political marginalization for everybody else.

Neoliberalism reduces politics mainly to a choice between politicians and parties who represent factions of the same corrupt ruling class, which retains a monopoly on power whichever party wins. But the fatal flaw in the neoliberal view of the world is the presumption that ruling classes can safely ignore the 99% of the population they disenfranchise, exploit or even kill.

This idea that only the elites in each country matter has led directly to the U.S. policy of “regime change,” in which leaders who resist neoliberalism are overthrown by whatever means necessary.  It should be no surprise that the new governments installed by all these U.S. wars and coups are among the most corrupt regimes on earth.

But as U.S.-led occupation armies have discovered in Vietnam, Iraq and Afghanistan, and as we can see right now in Iraq and Haiti, ordinary people still insist on having their say about the future of the world we all live in. U.S. policy is largely responsible for the life or death predicaments now facing young people in these countries, so they deserve our solidarity as they rise up to resist.

Medea Benjamin is cofounder of CODEPINK for Peace, and author of several books, including Inside Iran: The Real History and Politics of the Islamic Republic of Iran. Nicolas J. S. Davies is an independent journalist, a researcher with CODEPINK and the author of Blood On Our Hands: the American Invasion and Destruction of Iraq.