Coming Under ‘Fire’ at Korea’s DMZ 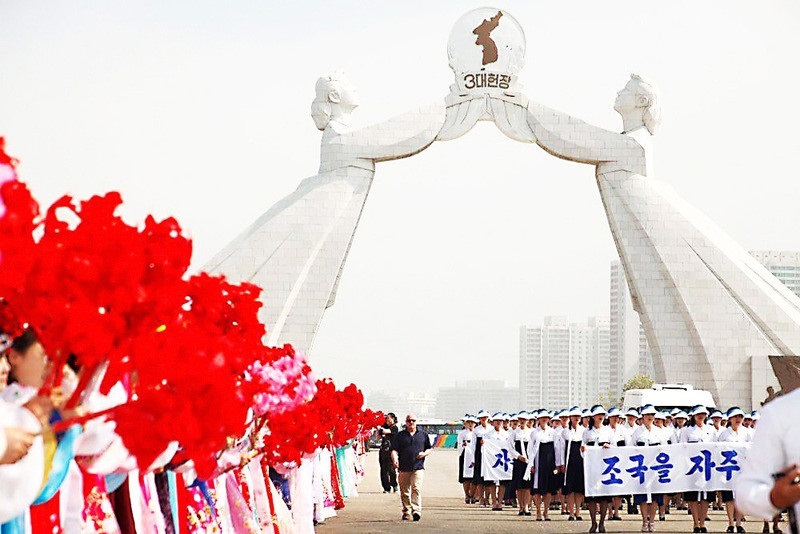 When we began our project “Women Cross the DMZ,” we knew the landmines in the DMZ would be nothing compared to the explosions of anger, vitriol and hate from those who oppose any contact with North Korea.

Some U.S. and South Korean government officials, academics, media talking heads and paid bloggers would have their knives out for any group that dared challenge the dangerous status quo on the Korean peninsula. No surprise that the knives have been attempting to slice away at the remarkable worldwide publicity our trip to both North and South Korea created.

The authors’ goal seems to be to intimidate any group working for peace and reconciliation in Korea by using the issue of North Korean human rights violations to scare off groups from contact with North Korea. For these detractors, peace and reconciliation in various parts of the world might mean they will be out of issues and jobs as their livelihood quite possibly is made from undercutting attempts to resolve contentious and dangerous issues.

In the lengthy article, their fixation on virtually every word, written or spoken, made by members of the delegation, centered on two themes: the only possible result of visiting North Korea is to give legitimacy to the government, and if you don’t hammer the North Korean government on human rights issues on your first visit, you have lost all credibility.

It seems apparent that the authors have never been involved in the delicate art of diplomacy. As a diplomat in the State Department for 16 years, I learned that if your goal is to foster dialogue you must first build some level of familiarity and trust before you can go on to difficult issues.

Of course, Halvorssen’s and Gladstein’s commentary is not unique. In every international challenge, whether it deals with Iran, Cuba or North Korea, a cottage industry of writers emerges to make their fame and fortune on a confrontational approach to the governments. Some of the “think tanks” and organizations they represent are bankrolled by a handful of ideological billionaires or corporations in the weapons industry that benefit from fueling the status quo, continued sanctions, and a military approach to problems that only have political solutions.

From the beginning our mission was clear: to bring international attention to the unresolved issues created 70 years ago by the division of Korea in 1945 by the United States and Russia. We call for all parties to implement the agreements agreed to 63 years ago in the July 27, 1953 Armistice. We firmly believe that the unresolved Korean conflict gives all governments in the region, including Japan, China and Russia, justification to further militarize and prepare for war, diverting funds from schools, hospitals and the welfare of the people and the environment.

Of course, this justification also is used by U.S. policy makers in their latest strategy, the U.S. “pivot” to Asia and the Pacific.  We call for an end to that very profitable war footing, which is why the knives are out for us.

Without a doubt, North and South Koreans have much to resolve in the process of reconciliation and perhaps eventual reunification, including economic, political, nuclear issues, human rights and many, many others.

Our mission was not to tackle those inter-Korean issues ourselves but to bring international attention to the unresolved international conflict that is very dangerous for us all and to encourage dialogue to begin again, particularly among the United States, North Korea and South Korea.

That’s why our group went to both North and South Korea. That’s why we called for reunification of families and women’s leadership in peace building. That’s why we walked in North Korea and South Korea — and crossed the DMZ — calling for an end of the state of war on the Korean peninsula with a peace treaty to finally end the 63-year old Korean War.

And that’s why we will remain engaged no matter what the pundits write, because in the end, if groups like ours don’t push for peace, our governments are prone to go to war.

Ann Wright served 29 years in the U.S. Army/Army Reserves and retired as a Colonel. She also served as a U.S. diplomat in U.S. Embassies in Nicaragua, Grenada, Somalia, Uzbekistan, Kyrgyzstan, Sierra Leone, Micronesia, Afghanistan and Mongolia. She resigned from the U.S. government in March 2003 in opposition to President George W. Bush’s war on Iraq. In her letter of resignation, she mentioned her concerns about the Bush administration’s refusal to engage/dialogue with North Korea to resolve issues of concern.