CODEPINK Statement in Response to the Hanukkah Stabbing Attack in Monsey, New York 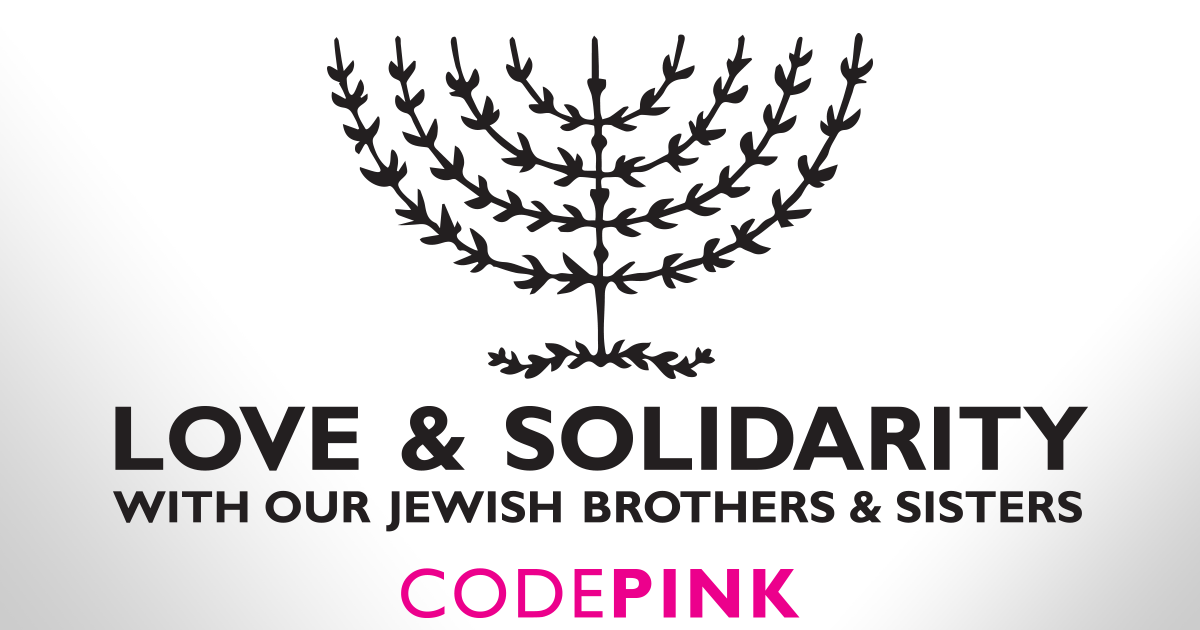 December 29, 2019 — CODEPINK is heartbroken and horrified at the latest antisemitic act, the stabbing attack in Monsey, NY during a Hanukkah celebration at the house of Rabbi Chaim Leib Rottenberg. CODEPINK sends love and solidarity to the affected families and all of the Hasidic and ultra-orthodox Jewish communities in America who have been on the frontlines of the dangerous rise in antisemitic hate crimes.

The Monsey stabbing attack occurred on the seventh night of Hanukkah. It followed eight other attacks in Brooklyn and Manhattan over the past week in which members of the Orthodox Jewish community were punched, kicked and had objects thrown at them.

Love and prayers are not enough. CODEPINK calls on all people to take action to stem the tide of growing fascism and racism in this country and across the world. Although the Monsey attack was perpetrated by one man alone, his actions are part of a sharp rise in antisemitism that has been encouraged and perpetrated by Donald Trump.

During Trump’s three years in office, the U.S. has seen antisemitism soar. In 2018, the number of attacks against Jews and Jewish institutions doubled. This is occurring alongside Donald Trump’s association with known White Nationalists such as Steve Banon, Sebastian Gorka, and Stephen Miller, and his repeated use of antisemitic tropes and dog-whistles. In August 2017, in response to Nazis marching in Charlottesville, Trump said there were “very fine people on both sides.” In October 2018, Trump contributed to conspiracy theories that Jews were funding a caravan of migrants from Latin America to invade the U.S. On December  7, 2019, Trump told a Jewish audience: "A lot of you are in the real estate business. I know you very well. You're brutal killers, not nice people at all. But you have to vote for me, you have no choice," invoking a centuries-old antisemitic trope that Jews care more about money than other people do. The aforementioned incidents are only a sampling of the antisemitic statements and stereotypes Trump has used since coming into office.

CODEPINK also condemns the anti-Black racism being incited by some people in response to the Monsey stabbing and the December 10, 2019 shooting in a New Jersey Kosher supermarket, both of which were perpetrated by Black individuals. CODEPINK calls on the Conference of Presidents of Major American Jewish Organizations (CoP) to cut all ties with Morton Klein, president of the Zionist Organization of America, who has been leading such incitement against the Black community.

This rise of different forms of hatred in America—including fascism, antisemitism, Islamophobia, anti-immigrant sentiment, anti-Black racism—is part of a global trend encompassing Brazil, India, Israel, Hungary, the United Kingdom, and other places. That’s why we must work together, across the world, to move beyond prayer and into action to ensure that people of all ethnicities, races, and religions can live in safety and peace, without individual hate-crime acts of violence or the mass violence of wars. This need for a global response is exemplified by the December 28 horrific attack in Somalia, when a truck laden with explosives blew up, killing at least 79 people.

As an organization with numerous Jewish leaders and members, CODEPINK rejects the response being called for by some that synagogues and other places of worship should have armed security. It is only through education, collective solidarity and unarmed community protection that safety can be obtained.

CODEPINK suggests that people place menorahs or images of menorahs in their windows tonight for the eighth and final night of Hanukkah.