2 a.m. and Tighe and I just arrived to Sana’a International Airport.

An hour later Terry, Pam and Bob got in.  We arrived to our hotel in the Old city of Sana’a and were ready for some sleep. An hour into our sleep, we woke up to the beautiful sound of the fajr athan (the call of prayer).  We drifted off for a few hours and woke up again at 7 a.m. We enjoyed a tasty breakfast with our new friend Luai, and then headed together to our first meeting across town.

We were greeted by Abdul Rahman Barman, a HOOD lawyer who represents Abdulelah Haider Shaye and many of the Guantanamo prisoners and US drone survivors. Despite Abdul Rahman being one of the busiest men in Yemen, he was kind enough to set aside time to talk and share stories, information, and photos with us.

He holds the violence of the drone attacks in his heart and describes the devastation it’s left on young lives. His team works for Human Rights in Yemen and obviously have their hands full. After a little while, we were joined by Baraa Shiban, the project coordinator from Reprieve, the human rights group based in London.

Listening to Abdul Rahman and Baraa speak, we learned how former President Saleh took advantage of Al-Qaida’s growing presence in the Arabian Peninsula -- or better known as AQAP-- and would exaggerate the threat to the United States to secure funding for himself. We also learned through US cable leaks in 2012 that Saleh gave the U.S. “an open door to terrorism”. This strategy was counter-productive and strengthened and helped AQAP grow.   When a loved one is killed for no reason by our counter-terrorism policies, and their deaths are being denied by both Yemeni and U.S. governments, Yemenis feel that there is no other way but to seek revenge and join a militant group. They mention that in some cases, you even see recruitment happening in the jails, where petty thieves come out as Al-Qaida operatives, motivated again by revenge.

Everyone we met today had the same message-- the only answer to the violence is dialogue.  During our HOOD meeting, we were told that many in AQAP want to be in dialogue and reintegrated into society, but the Yemeni government and U.S. government continues to alienate them by refusing dialogue and dropping bombs.

In our second meeting we met with The Youth Organizing Committee. They told us that the key component of their work during the revolution was dialogue. Those who had grievances came together and spent 3 weeks learning to trust each other and find points of unity and common ground. Their goal was to get rid of Saleh and collectively build towards transition and a new post-revolutionary Yemen. 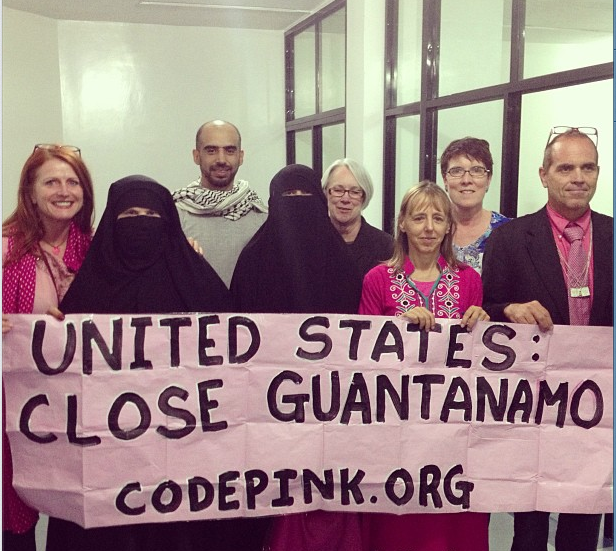 The CODEPINK delegation to Yemen met with families of Guantanamo prisoners today. This family has agreed to join CP to meet with the US Ambassador to Yemen to discuss closing Gitmo.


Despite Yemenis being strongly opposed to the drone strikes and Guantanamo Bay Prison, Yemenis say the bigger and underlying issue is a humanitarian and economic crisis. At least half of Yemen’s population are forced to worry about where they will be getting their next meal from. In addition to food insecurity, education, electricity and other basic needs are also being ignored by the Yemeni government.

At the offices of the Yemen Polling Center we were given the results of their last security concerns poll -- we were surprised to learn that drones or Al-Qaida didn’t register. The view from the US is that AQAP has a huge stronghold in Yemen; however, there is more fear of the well armed and much larger militias that the power struggling tribal leaders have, which has lent to whispers of a swiftly approaching civil war. The more powerful factions in the militia-citizen dynamic are funded by the United States, Russia, Iran and Saudi Arabia. Such a power play is reinforced by racism in electoral representation: for example, the tribe that experiences the most racism consists of 2 million of the 24 million in Yemen but has one seat of the 500.

Our friends here tell us that they have watched the country dissolve over the last 11 years and what is really missing is a country the people feel allegiance to. Corruption, warring factions and a horrific US-backed dictator have unraveled and destroyed the infrastructure of Yemen. Yemenis have been turned against each other by power interests just like in Iraq and Syria. A proxy war is taking place and everyone has power but those who live here.

Money is spent on Yemen but not “in” Yemen; instead of investing in development and education, billions have been wasted on the militarization of the country which in return, uses that force against its own people. It is beyond heartbreaking.

Yemen is so beautiful. The streets is full of the honking of horns, explosions of firecrackers at a distant wedding and the barking of dogs. Here in the old city the electricity just went off so we are in the pitch dark. What stays with me the most from the day was the generosity and kindness of the Yemenis we met. They are grateful that we are here showing a different kind of support from what they are used to by the international community, listening and standing in solidarity with the Yemeni people’s right to self-determination.

Electricity is back on and I must send this in this window of opportunity. Until tomorrow.