BlackRock profits in a time of crisis 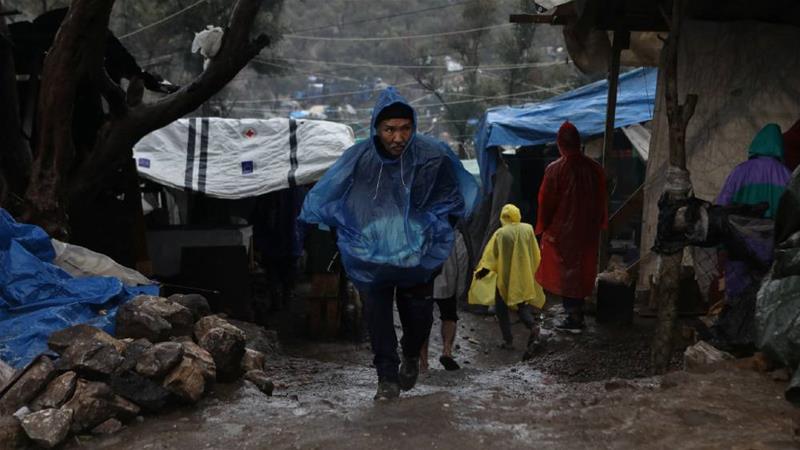 By Nancy Mancias, CODEPINK Divest from the War Machine Campaign

With little government support and corporate accountability, humanitarian aid workers are scrambling to address the refugee crisis in the wake of the global pandemic, COVID-19 (coronavirus).

The outbreak of the coronavirus comes at a time when there is a great influx of war and economic refugees migrating to Europe. Despite Turkey’s efforts to host millions of refugees, the country has reached its tipping point. President Erdogan signaled to refugees that his government would no longer hold them back from reaching Europe. After getting word of this, thousands of refugees took flight over land and sea. Disappointingly, they were greeted with hostility, teargas, and xenophobia from Greek law enforcement and European partners. The new Greek Prime Minister Mitsotakis charged that he will protect the country’s borders against illegal migrants. Meanwhile, refugees are situated on the Greek-Turkey border in Edirne, living in cold muddy makeshift camps without the basic necessities to combat the coronavirus.

After nine years of war in Syria, the country of Turkey has hosted millions of Syrian refugees—more than any other country. Additionally, Jordan, Lebanon, and Iraq have felt the brunt of the Middle East migrant crisis because of the US-backed wars. Even though there are no coronavirus cases in the camps, humanitarian aid workers believe that it is only a matter of time. Are the governments prepared to protect the most vulnerable in the camps?

On the Greek Island of Lesvos, refugees from conflict regions, mostly Iraq, Syria, and Afghanistan, are packed into Moria, a squalid camp meant to house three thousand people. Over nineteen thousand refugees reside in the overcrowded camp which offers limited access to good hygiene and sanitation. Because of the inability to control the spread of the coronavirus within the camp, Médecins Sans Frontières/Doctors without Borders (MSF) is urgently requesting that the Greek government evacuate the camps on Lesvos and the other Aegean islands. As of now, MSF is coordinating with the country’s National Public Health Organization.

In the United States, medical professionals and lawyers have stated that it is only a matter of time that the coronavirus will spread in US private prisons operated by Geo Group and Core Civic. Similarly, to the camps in Europe and the Middle East, it is reported that there is a lack of good hygiene and sanitation in the overcrowded prisons which house migrants from Latin America. However, US humanitarian aid workers and doctors are not allowed access into the prisons, making it difficult to truly know the level of urgent care that is needed. There are attempts by Congress to hold the private prisons accountable. Members of the Senate penned a letter to the federal Bureau of Prisons and private prison companies, requesting an outline of how they will address the coronavirus. In Washington, immigrant rights groups are demanding swift results by asking for the release of the most vulnerable immigrants from the state prisons.

It is US-led wars and policies which have driven refugees and migrants across the globe to overcrowded and unsanitary camps and prisons. As we approach the anniversary of the disastrous Iraq war, the US remains in conflict with seven countries: Afghanistan, Iraq, Syria, Yemen, Somalia, Libya, and Niger. The United Nations reports that there are 70.8 million forcibly displaced people across the globe with 6.7 million from Syria and 2.7 million from Afghanistan. Even though the US-brokered a peace deal with the Taliban in Afghanistan, after thirteen years, the number of displaced Afghan refugees remains the second-highest in the world. After five years of conflict in Yemen, 3.6 million people have been forced to flee. In Iraq, millions of Iraqis remain internally displaced. The country is host to thousands of Syrian refugees fleeing their home country. In Libya, Somalia, and Niger, millions are in desperate need of protection and humanitarian assistance. It is safe to say that US-led wars are one of the root causes of the global humanitarian crisis across the Middle East and Northern Africa. Additionally, the US has meddled in Latin American politics for decades by supporting oligarchies, passing neoliberal trade deals, training death squads, waging a fictitious war on drugs, and supporting the coup d’etat on democratically elected officials. The US destabilization of Latin America has resulted in mass migration to the country.

It is the weapons companies, private prisons, and asset management firms like BlackRock which stand to gain a profit from war and migration. Not only is BlackRock the largest investor in the private prison companies, Geo Group and Core Civic, but they promote a roughly three million dollar defense fund locked and loaded full of weapons made by Lockheed Martin, General Dynamics, Raytheon, Northrop Grumman, and Boeing defense. All these companies are publicly traded on the market. All these companies profit off the backs of the most vulnerable: refugees. It is shameful how BlackRock can continue to brazenly turn a profit while migrants and refugees lack basic necessities to combat the coronavirus.

Across the globe, humanitarian workers are working tirelessly to support migrants and refugees against the coronavirus. In the United States, Europe, and the Middle East, camps and private prisons are ill-equipped to prevent the spread of the coronavirus. The United States has played a significant role in the global migrant crisis. Weapon manufacturers, private prison companies, and asset management firm BlackRock will continue to profit from the most vulnerable.