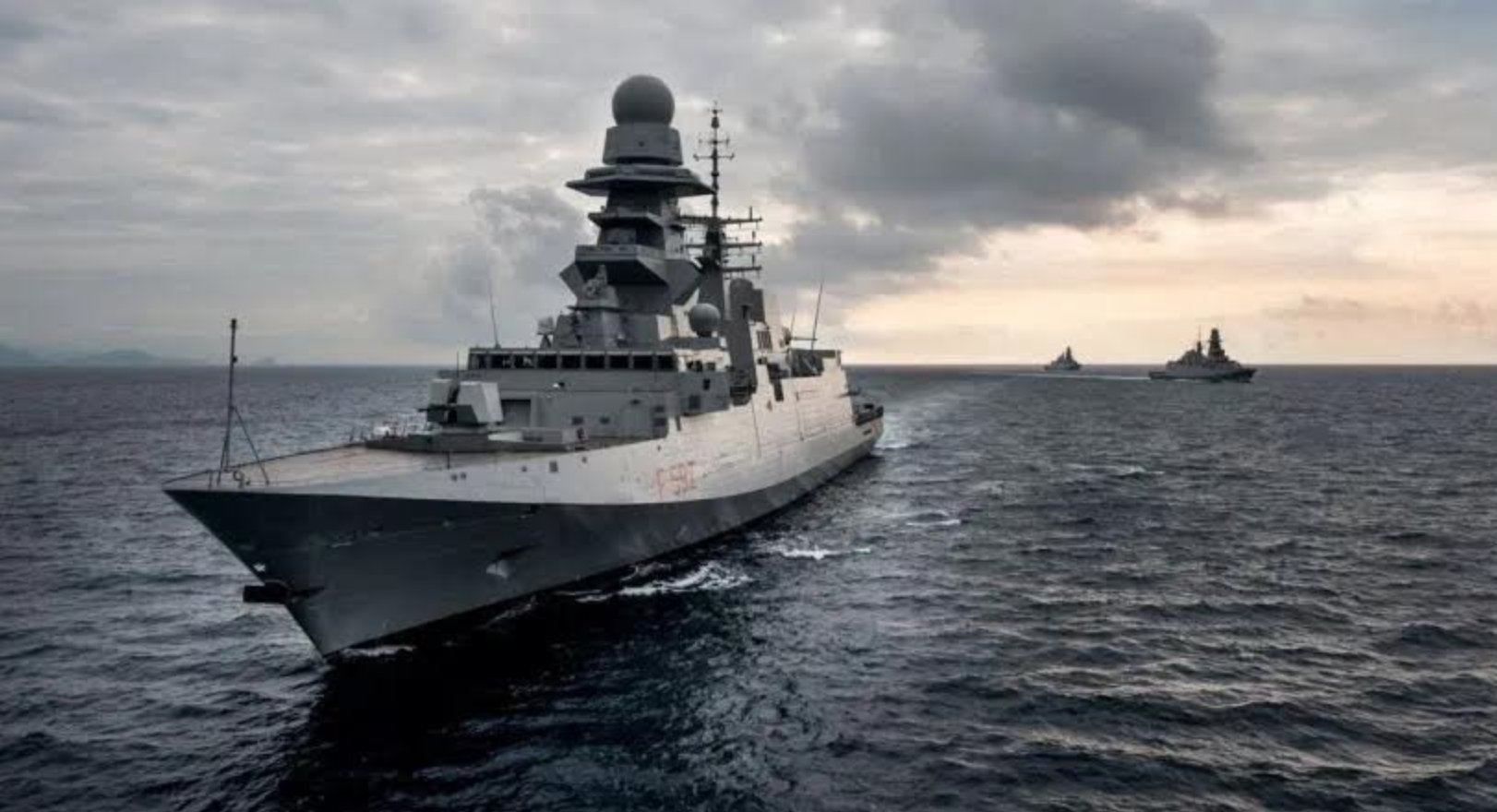 Promotional image of the Italian frigate the U.S. Navy is adapting for construction at Marinette.
Photo credit: Fincantieri

The time for manufacturing of weapons of war has passed as a viable industry for our nation, despite the way some of our political leadership clings to economies of the past.—Lisa Savage, U.S. Senate candidate in Maine

On Thursday, June 25th, President Trump’s re-election efforts took him to the “battleground” state of Wisconsin, where he toured the Fincantieri Marinette Marine shipyard. He railed against the Democrats as a scarier enemy than Russia or China. He also celebrated Wisconsin's win over domestic enemies like the state of Maine in securing a key shipbuilding project. "The first-in-class FFG(X) [frigate] will not just be a win for Wisconsin workers; it will also be a major victory for our Navy," Trump said.  "… The stunning ships will deliver the overwhelming force, lethality, and power we need to engage America’s enemies anywhere and at any time."  On many military minds, it seems, was China.

“If you just look at the geography of Indo-Pacom, these ships can go a lot of places that destroyers can’t go," said Northeast Wisconsin's Representative Mike Gallagher, a hawkish Republican outspokenly eager for future wars in the 'Indo-Pacific Command': in particular, wars against China.  "… not just frigates, but unmanned ships… it will align nicely with a lot of what the Marine Corps Commandant is talking about in terms of capitalizing on the overdue death of the [Intermediate Range Nuclear Forces] Treaty, and fielding intermediate range fires.”

The Commandant in question, Gen. David Berger, has explained: “The thing that has driven us to where we are right now is the paradigm shift by China moving to sea…” Berger wants "mobile and fast" ships to keep American marines on temporary bases as near as possible to China, since “the farther you back away from China, they will move toward you."

Fincantieri, an Italian company, acquired the Marinette shipyard in 2009, and, just last month, received a lucrative US Navy contract to build between one and ten frigates, representing a tactical shift from larger destroyers. Outfitted by Lockheed Martin with 32 vertical launch tubes and a “state of the art SPY-6 radar system,” with power capacity to accommodate arriving "electronic warfare systems,” the frigate will be capable of simultaneously attacking submarines, land targets and surface ships. If all ten ships are built in the shipyard, the contract will be worth $5.5 billion dollars. Rep. Gallagher and President Trump both support a Navy leadership goal of expanding the U.S. fleet well beyond its current speculative cap of 355 warships, adding multiple unmanned vessels. .

Marinette had been vying with several other shipyards, including Bath Iron Works in Maine, for the multi-billion-dollar contract. On March 2, a bipartisan coalition of 54 WI legislators had signed a letter urging President Trump to direct the U.S. Navy frigate construction contract to the Marinette shipyard. “We are hopeful that the US Navy will decide to bring additional ship construction to the state of Wisconsin,” the legislators wrote in their concluding paragraph, calling the opportunity vital not just for a growing Wisconsin shipyard, “but for the communities of great Americans who will benefit for years to come from valuable and meaningful work on behalf of our country.”

The deal could add 1,000 jobs in the area and the shipbuilder plans to invest $200 million to expand the Marinette facility because of the contract. So this was a victory lap for the shipyard, but also for Donald Trump who can deliver these jobs to a "battleground" state crucial for his hopes in this coming winter's election. Would this rally have occurred had the contract gone to Maine's Bath Iron Works?  Lisa Savage is campaigning as an Independent Green to represent Maine as a  U.S. Senator. Asked to comment on whether Maine "lost" when the contract went to Wisconsin, she offered this statement:

Bath Iron Works in Maine is currently engaged in union busting contract negotiations to promote its ongoing policy of bringing in contract labor that is not unionized. This follows years of no-raise contracts with its largest union, S6, the result of BIW demanding that workers sacrifice so that its owner can pay its CEO tens of millions of dollars a year and buy back its own stock. General Dynamics can afford to pay workers fairly, given the $45 million tax break the Maine Legislature granted the massive military manufacturer, and the $900 million in cash on hand the company reported in its last SEC filing.

The time for manufacturing of weapons of war has passed as a viable industry for our nation, despite the way some of our political leadership clings to economies of the past. The global pandemic emphasizes for us all the interconnectivity of our global society and the folly, wastefulness, and moral failure of war in all forms. We must transform facilities like BIW and Marinette into hubs of manufacturing for solutions to the climate crisis, including public transportation, resources for the creation of renewable energy, and disaster-response vessels.

Building clean energy systems would generate up to 50% more jobs than making arms systems according to research by leading economists. The two biggest security threats to the United States are currently the climate crisis and COVID-19. The Pentagon's contractors have long contributed to the climate crisis, and the time for conversion is now.

Before the pandemic hit, and before this U.S. Navy contract was awarded to Marinette, my fellow activists at Voices for Creative Nonviolence were planning a protest walk to the Marinette shipyard. As Trump noted in his speech at Marinette, they are currently building four Littoral Combat Ships for sale to the Kingdom of Saudi Arabia. Defense industry analysts noted, in late 2019, with the U.S. Navy no longer interested in purchasing Littoral Combat Ships from the yard, the Marinette shipyard had been “saved by the Saudis” and by Lockheed Martin, which had helped arrange the contract.

The Saudi military has been using U.S.-supplied Littoral (near-coast) Combat Ships to blockade the coastal ports of Yemen, which is undergoing the world's worst humanitarian crisis due to a famine exacerbated by the Saudi-led blockade and an invasion involving relentless aerial bombardment. Actual cholera epidemics, reminiscent of centuries past, were another result of the war's creation of lethal delays and shortages for Yemeni people in desperate need of fuel, food, medicine and clean water. Yemen’s humanitarian situation, worsened by the spread of COVID-19, is now so desperate that the United Nations humanitarian chief, Mark Lowcock, warned Yemen will "fall off the cliff" without massive financial support. President Trump took full credit for the Saudi contract at today's rally.

The world that our global empire is swiftly creating, through our devastating oil wars in the Middle East and our arriving cold wars with Russia and China, is a world without winners. Maine could find ample reason to celebrate losing its battle for this contract if it considered the precious gained opportunity of which Savage eloquently reminds us: of conversion, with a net gain in jobs, to industries that prepare us against the real threats we face: devastating climate change, a global pandemic, and the corrosive shame of endless war. We must resist signing contracts with weapon makers profiting from endless immiseration of the Middle East and needless superpower rivalries inviting full nuclear war. Such contracts, inked in blood, doom every corner of our world to perish as a battleground state.