When are we, as a nation, going to have a frank discussion about drones and remote-controlled killing? One might think that such a dialogue could take place when thousands of people come together, once a year, at the gathering of the Association of Unmanned Vehicle Systems International (AUVSI). Wrong.

But AUVSI, the lobby group for the drone industry, brooked no dissent at its August 6-9 Las Vegas Convention. When I, as author of a new book Drone Warfare: Killing by Remote Control, tried to rent a room at the Convention Center to give a presentation on my book, AUVSI vetoed my request. When I tried to register as a journalist, I was told that I did not meet their criteria, but they refused to say what that criteria was. And after registering online as a normal participant and paying the $200 fee, when I appeared to get my badge I was yanked off the line, surrounded by police, and told I would be arrested if I set foot in the Convention Center during the duration of the gathering.

The same thing happened to Father Louie Vitale, an 80-year-old Franciscan priest who had registered and pre-paid for the conference. Father Vitale is known for his dignified, faith-driven stance against war, including drone killing. “There’s something from my Air Force days that fascinates me about drones, which is one of the reasons I wanted to get in to see the exhibits,” said Father Vitale, “but I also wanted to have conversations with some of the drone manufacturers and operators.” That was not to be. Unprovoked, Father Vitale found himself surrounded by Convention Security and Las Vegas police, who threatened him with arrest.

CODEPINK supporter and writer Tighe Barry flew all the way from Washington DC to attend the conference. Pre-registration confirmation in hand, he was given his badge, only to find it snatched away from him 20 minutes later. “I was sitting quietly in a session on the integration of drones into US airspace when I was grabbed by security agents and pulled out of the room. How sick is that?” said Barry. “These people are crazy!”

A few peace activists did not get immediately stopped by AUVSI’s thuggish security, but two of them were banned when they dared to simply ask a few probing questions to the exhibitors at the booth of General Atomics, the company making the lethal Predator and Reaper drones. “I was merely asking if the company feels any responsibility when its products are used to kill innocent people in places like Pakistan and Yemen,” said Jim Haber of Nevada Desert Experience, a group that has been peacefully protesting nuclear weapons for decades.

Janis Sevre-Duszynska, a writer for National Catholic Reporter, was allowed inside but was overwhelmed by the experience. “Walking through the exhibit hall was surreal. It is all about performance, speed, targets and sales—nothing about consequences,” said Sevre-Duszynska.  “It felt like a war zone, and I felt like an alien. There didn’t seem to be others who were questioning the deadly uses of this technology.”

CODEPINK cofounder Jodie Evans, who managed to get in for a few hours, had the same alien feeling—especially from a women’s perspective. “There were so few women it was spooky,” said Evans. “I would say the ratio of men to women was about 500 to one—and some of the women were girlfriends of the guys. Let’s just say the Ladies Room was empty.”

Lockheed Martin used the occasion to announce that it had completed flight tests for a new drone that can be repowered in the air by laser. “You know what they named their drone? The Stalker,” said Evans, who is a longtime advocate for women’s rights. “Misogynistic, macho and violent messages were everywhere—stalking, neutralizing, eliminating the enemy—and of course the phallic symbols start with the drones themselves.”

Mary Lou Anderson, Council Member of Nevada Desert Experience, who was also ejected from the trade show floor, noted that there was a huge discrepancy between the keynote addresses that focused on the potential civilian uses and benefits of drones versus the overwhelming presence of the military in the exhibit hall. “I would say over 85% of the vendor and manufacturer exhibitors were either entirely military based, or partnered with the military and police.”

The Army, Navy, Air Force and Marine Corps had their exhibits. So did weapons manufactures such as General Atomics (maker of the Reaper and Predator drones), Northrop Grumman (maker of the Gray Eagle, known for its “lethal persistence”) and Boeing (maker of the Phantom Eye).

Other exhibitors were military bases like Yuma Proving Grounds in Arizona and Edward Air Force Base in California that are trying to rent space out to private companies to test and develop drones, and universities like the University of North Dakota touting their training programs for drone operators.

"Some of us are worried about the unregulated proliferation of drones, and the innocent people who are being killed in our remote-controlled wars” said Jim Haber, who lives in Las Vegas and often vigils outside the nearby Creech Air Force Base where drones killing people in Afghanistan are being piloted. “But AUVSI is worried about peace—and people who profess pro-peace views. I suppose they see us as bad for business.” Indeed, some of the sessions addressed the dronemakers’ concern about finding new markets with the wars in Iraq and Afghanistan winding down. 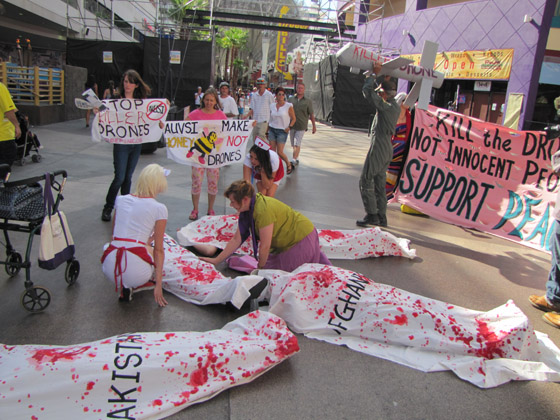 Outside the Convention Center, protesters staged a die-in to commemorate the innocent people killed by lethal drones. And the next morning at 6 am, a handful of peace activists headed out to Creech Air Force Base 40 miles away to greet military personnel driving into the base, some of whom are drone operators.

The group included Father Vitale and 75-year-old Father Zawada, who sat on his walker in the blazing sun. Vitale and Zawada held a banner that read “Ground the Drones, Lest You Reap What You Sow.” Another vigiler held a sign with a friendly-looking bee saying “Make Honey, Not Drones.”

“Peace be with you, brother,” the priests called to the military personnel in their cars. Overhead, a menacing Reaper pierced the desert sky.

Twenty minutes later, alerted to the ragtag pro-peace group, several large police SUVs came careening down Route 95 towards the base. AUVSI is not the only group threatened by devout peacemakers.