All I Wish is for Palestine to be Free 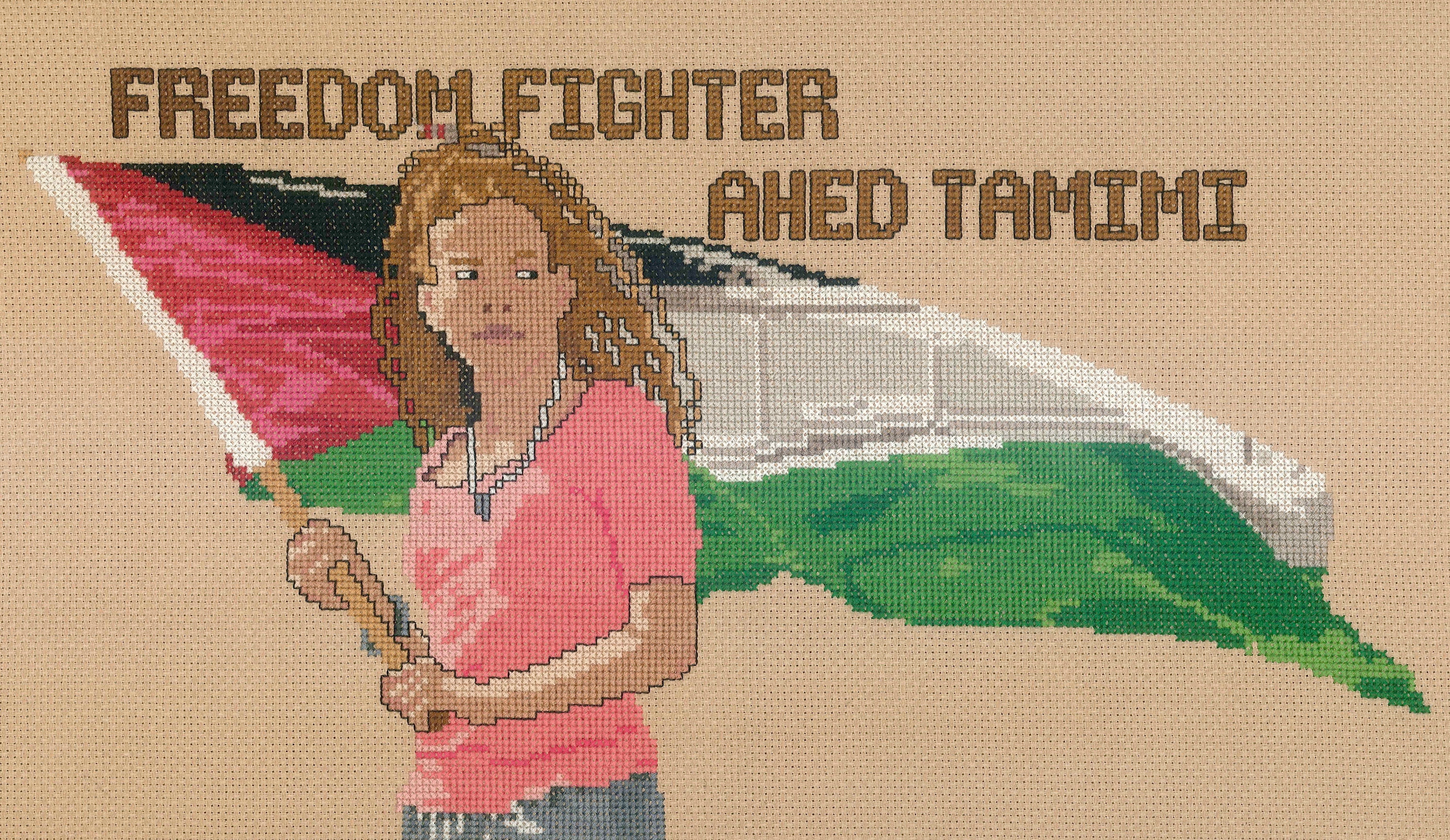 In 1976, the Palestinian villages of Nabi Saleh and Deir Nidham were encroached upon by Israeli settlers, and their ever-expanding colony of Halamish was born. In December 2009, little Nabi Saleh began holding peaceful demonstrations every Friday in opposition to settlement growth and the usurpation of the land’s fresh water springs.

Eight years later, on Friday, December 15, 2017, the residents of Nabi Saleh were protesting US president Donald Trump’s recognition of Jerusalem as the capital of Israel. During the protest, Israeli occupation forces shot 15-year-old Mohammad Tamimi in the face with a rubber bullet, seriously wounding him. Shortly afterward, Mohammad’s 16-year-old cousin Ahed Tamimi responded by accosting two Israeli soldiers right in front of her home. She reviled, slapped, and kicked them in a remarkable act of defiance. By Monday, a video of the confrontation taken by her mother had gone viral worldwide.

(Ahed has been resisting Israeli occupation since she was nine years old. And she’s not the only one in her family to do so. Her parents have been resisting the occupation for many years and several members of her extended family have been killed by Israeli troops. Most recently another of her cousins, Musab Firas al-Tamimi of Dier Nidham, was the first teen to be shot and killed by occupation forces earlier this year.)

In the early hours of December 19, Israeli forces raided Ahed’s home and arrested her. According to her father Bassem Tamimi, it took “at least 30 soldiers” to carry out the raid. When that afternoon Ahed’s mother Nariman went to the police station where her daughter was being held, in order to be present for her interrogation, she herself was arrested.

Ahed’s trial began on February 13, behind closed doors. She has been slapped with twelve charges, including stone-throwing, a charge levied against the vast majority of detained Palestinian children and punishable under military law by up to 20 years in prison. Stone-throwing and even participating in demonstrations are “security offenses” under the Israeli military court system.

When I first started work on this embroidered poster of Ahed Tamimi, I wanted it to be a testimony to her predicament. But as I read further about the treatment of Palestinian children at the hands of Israeli occupation forces and learned, for instance, that since the 2000 Al-Aqsa Intifada, more than 12,000 children have been detained by the Israeli military, I was reminded that beyond Ahed’s story are countless incidents that have yet to attract much media attention. For example, following Trump’s call to move the embassy to Jerusalem, the Israeli occupation forces detained not one but about 450 children.

It doesn’t matter how, when, or at what age a Palestinian might resist illegal Israeli military occupation. Any resistance is a crime in the eyes of the occupier’s law—in a nation whose own citizens’ first and last toy is fated to be a gun.

To such jaded eyes, a Palestinian resister, whether it be 13-year-old Abdel Raouf al-Bilawi from Dheisheh refugee camp in Bethlehem, who was sentenced on January 22 to four months in prison for throwing stones or 24-year-old journalist and photographer Bushra al-Taweel who was arrested at her home in Um al-Sharyet, Ramallah on the night of November 1, 2017, Palestinians of every shape, size, age or gender are being gradually cleansed from their land.

A shocking tactic in the ethnic cleansing being carried out by the Israeli military is that they target their “enemy” when they’re young. Bushra al-Taweel, for example, was first arrested on July 6, 2011, when she was just 18 years old. Get them young and then break them. That’s the strategy.

This trend—the arrest of Palestinian children by occupation forces—is a rising one. Over the years, the Prisoner Support and Human Rights Association Addameer has witnessed “a decrease in the overall prison population, but … a vast increase in the number of children being held,” and has found that around “700 Palestinian children under the age of 18 from the occupied West Bank are prosecuted every year through Israeli military courts after being arrested, interrogated and detained by the Israeli army.”

They [the Israeli soldiers] laughed and laughed at me. I told them: ‘You are laughing at us now, but you don’t know that Palestine will be free and we will laugh at you when you leave.’

Pity the occupier of Palestinians that are viewing their “enemy” through the barrel of a gun—a barrel-visioned fighting force that never really grew up or maybe was never even really a child. Is it any wonder that such a force is incapable of distinguishing between a child and an adult? Not that it matters, because whether an adult or a child, each and every occupied Palestinian feels the hot wrath of occupation.

Denial of resources like water to Palestinians does not discriminate between the old and the young. It parches them equally. The wall that separates a farmer from his fields does not magically open up when a child approaches it. It sends a message equally. The tear gas that is fired by Israeli forces into Palestinian homes (before they are eventually bulldozed) tortures all who are inside. Even so, attacking and imprisoning children is unconscionable by any International law standards.

The systematic collective punishment imposed on Palestinians includes arrests, interrogations, house arrest, and zero protection in their formative years. It thereby alienates them from their families and familiar surroundings and disrupts their studies. There are sexual threats aimed at coercing false confessions; deceptive techniques aimed at recruiting informants; psychological and physical torture; slapping, beating, kicking, and denial of food and water for long periods; and, of course, false accusations of terrorism.

While the focus on Ahed Tamimi is important and her commitment is something that we should all admire, it is essential that there is focus on the situation for all children in the occupied Palestinian territory. Ahed Tamimi’s case, and her treatment, is not exceptional; it is, unfortunately, the norm.

As of 2017, there are 350 children being held in Israel’s prisons. Each of them, as well as each of those who preceded them, is a freedom fighter like Ahed. They all deserve their own embroidered posters and media attention.

I leave you with some more of Ahed’s heartbreaking words, arising from a place where the most natural children’s activities—playing, studying—are barricaded, walled and settled. She describes the discovery of lost childhood pleasures under almost unimaginable circumstances.

These are the bullets which the soldiers shoot at us (the necklace Ahed is wearing in the embroidered poster.) We collect them after they leave the village. [Touching her necklace Ahed says] These came from my uncle who was martyred. My cousin gave them to me. We make beautiful things out of them, like jewelry. We create life from death. They come to kill us with it, but we convert it into things which we enjoy and benefit from.

Priti Gulati Cox (@PritiGCox) is an interdisciplinary artist. She lives in Salina, Kansas. See more of her work here.