Demand Facebook remove the Islamophobic ads against Rep. Ilhan Omar, stop AIPAC from endangering the lives of congresswomen of color 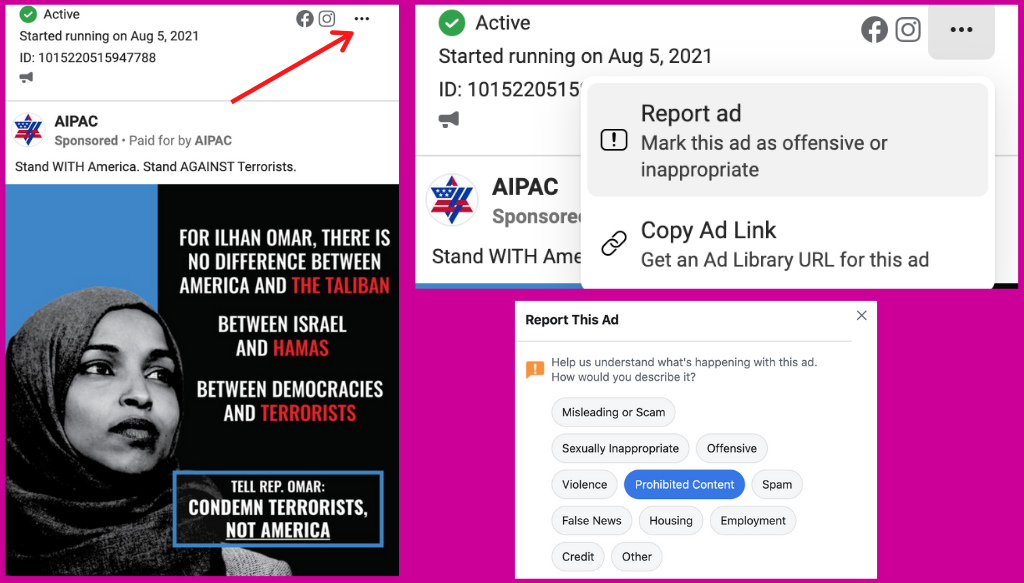 Tell Facebook to remove the Islamophobic misleading ads from AIPAC that endanger the lives of women of color in Congress.

Are you on Facebook? You can also go to AIPAC’s Facebook “ad library,” click the three dots in the upper right corner and report the ad.

As people who abhor Islamophobia and are concerned with the safety of members of Congress who are progressive women of color and as people opposed to misinformation and the twisting of words, we call on you to immediately take down the paid ads by the American-Israel Public Affairs Committee (AIPAC) targeting Congresswomen Ilhan Omar, Alexandria Ocasio-Cortez, Cori Bush, and Rashida Tlaib. The ads, some of which are currently running, accuse the congresswomen of lying about Israel by using the words “apartheid,” “act[s] of terrorism” and “ethnic cleansing.” However, these words are accurate descriptions of Israel’s actions and treatment of Palestinians.

One of the ads attacking Ilhan Omar goes even further by baselessly linking her, a Muslim-American, to terrorism. It’s textbook Islamophobia and it puts her life in grave danger. Your state in your community standards for "objectionable content" that you "don’t allow hate speech on Facebook. You further state that:

"We define hate speech as a direct attack against people — rather than concepts or institutions— on the basis of what we call protected characteristics: race, ethnicity, national origin, disability, religious affiliation, caste, sexual orientation, sex, gender identity and serious disease. We define attacks as violent or dehumanizing speech, harmful stereotypes, statements of inferiority, expressions of contempt, disgust or dismissal, cursing and calls for exclusion or segregation. We also prohibit the use of harmful stereotypes, which we define as dehumanizing comparisons that have historically been used to attack, intimidate, or exclude specific groups, and that are often linked with offline violence."

AIPAC's ads against Representative Ilhan Omar are dehumanizing and use the harmful stereotype that Muslims are terrorists. The use of this stereotype has not only historically been used to attack and exclude Muslims and has often been linked with offline violence. As Omar’s communications manager Jeremy Slevin stated on Twitter “the language AIPAC uses in paid ads to smear and vilify [Omar] is virtually identical to the language used in death threats she gets.” AIPAC's hate speech ads against Rep. Omar are putting her life at risk.

In addition, it must be brought to your attention that Omar, Tlaib, Bush, and Acasio-Cortez are not the only members of Congress who have spoken out for or acted in support of Palestinian rights. They are being targeted by AIPAC because they are Muslim and/or women of color. This racism is unacceptable and must be addressed.

Please remove AIPAC’s racist, hateful, Islamophobic, dangerous ads and see that they are not allowed to post such things in the future.