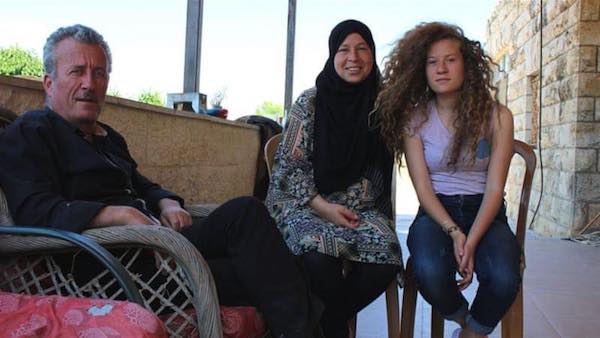 December 19, Nabi Saleh, Occupied Palestinian Territories - The Israeli army arrested 16-year-old Palestinian human rights activist Ahed last night during a night raid at her home in the West Bank village of Nabi Saleh. Where she is being held now is unknown. Ahed’s older brother was prevented from filming the arrest,  and the rest of the family, including her mother, father and younger brother were beaten. The Israeli military also confiscated their electronic devices, including  telephones, computers, cameras and hard drives.

Ahed’s mother, Nariman Tamimi, was arrested today while trying to inquire at the Israeli police station about the whereabouts of her daughter.

Ahed is a high school student concentrating on general studies and preparing for college. She has received worldwide acclaim for her childhood activism in opposition to the Israeli occupation of Palestinian land and the specific targeting of her family and village, Nabi Saleh. In 2015 Ahed and her family were profiled by the New York Times Magazine. At 13 she received the Hanzala Courage Award in Turkey. At 15 she made headlines across the world when a video went viral of her trying to free her brother from attack and arrest by an Israeli soldier. She was also previewed in a South African calendar about courageous Palestinian children.

Nariman Tamimi, before being arrested, spoke about the family's commitment to peaceful resistance, "The arrest of my daughter, Ahed Tamimi, will not prevent our family from continuing to resist Israel’s occupation and settlements. We will continue to rally the world to take a public stand against the occupation, against the settlements, and to expose Israel’s violations of human rights and international law."

Manal Tamimi, Ahed’s aunt and a well-known activist herself said, “Ahed’s arrest is proof of the success of the popular resistance struggle in the village of Nabi Saleh and throughout the West Bank. Ahed and her mother’s arrests are part of large scale targeting of Palestinian human rights activists.”

Bassem Tamimi, Ahed’s father, who has previously endured a number of prison terms for his participation in peaceful resistance, spoke about the arrest of his daughter and wife and the attack on his family and village. “Since the time she was a young girl, Ahed has been a leader of our peaceful resistance, standing up to the soldiers and settlers who enter our village and steal our land and our freedom. She considers it her responsibility to fight for our freedom. Her abduction at the young age of 16 by the Israeli occupation cannot be tolerated.”

It is well documented that Palestinian children are beaten, abused, and tortured during their arrests by the Israeli military. In November US congresswoman Betty McCollum introduced legislation to condition that US military aid to Israel not be used for the abuse and detention of Palestinian children in Israel’s military court system.

Issa Amro- from Hebron- and lawyer Farid Al-Atrash- from Bethlehem- are Palestinian Human Rights Defenders who currently face charges themselves for nonviolent activism and are being supported by Amnesty International,  said “the arrests of children and activists in the villages of Nabi Saleh, Bil'in, Ni'lin, Kafr Qaddum and the Adia and Dheisheh refugee camps are part of a massive crackdown by Israel on peaceful resistance to a brutal military occupation.” 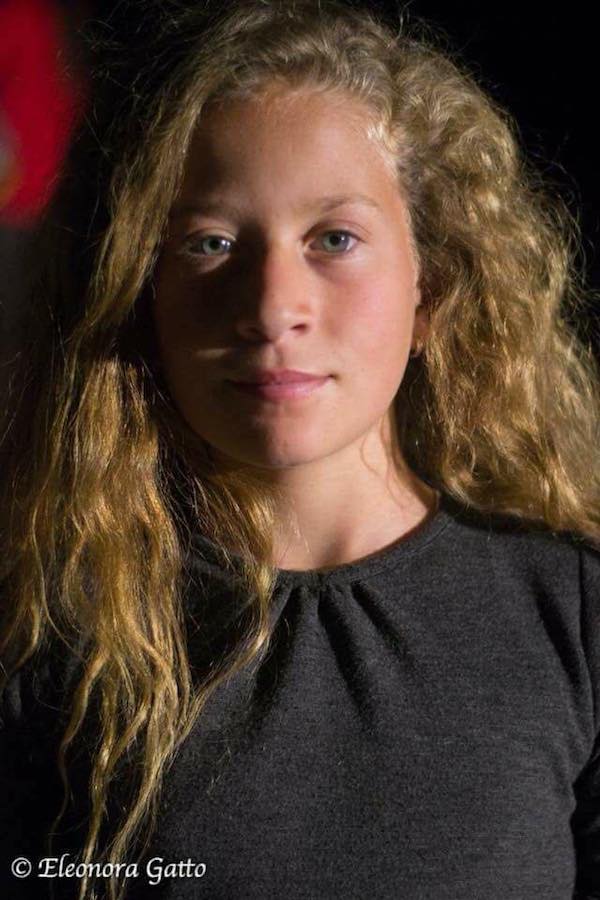