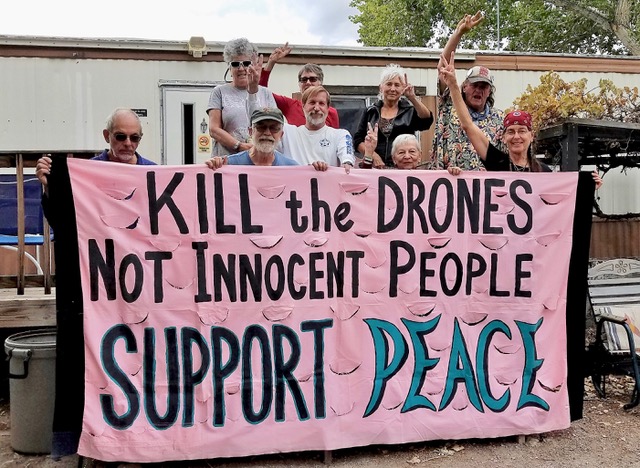 On Thursday, October 4th, as part of this fall's CODEPINK weeklong anti-drone protest at Creech Assassin Drone Base, 7 protesters and a couple of supporters bravely stepped across the base entrance road to temporarily “halt” the cruel and illegal U.S. Air Force's "remote killing machine” located in the beautiful Nevada desert. While holding large banners across the roadway, our voices repeatedly called out as loudly as we could muster: “STOP the murder, STOP the War Crimes……The People Demand Peace!"

On Oct. 12, just one week later, a U.S. drone strike murdered "about 60" Al-Shabaab fighters in Somalia; The NY Times reported 4 DAYS AFTER the attack.  The NY Times used the kinder word, “killed.”  Later, Somali officials said over 75 mostly new recruits, were “killed” by two U.S. drones. But, hey, who’s counting?  What’s another 15 young black dead men?  Whose young brothers, sons, grandsons or nephews were sacrificed?  Who grieves?  Whose tears and wails will we never see or hear? What young brothers, sons and cousins of the new dead will soon become the next  Somalia militants fighting against U.S. Imperialism?

Do we see a pattern here?  Mass murder that is becoming normalized in the western world?  As one of our banners reads:   "Mass Shooter and Drone Pilot:  Both Hunting People?”  At Creech AFB there is a military sign that says “Creech AFB: Home of the Hunters."  Should the U.S. military take pride in hunting people?

The U.S. Drone Killing Machine is a very covert and secret apparatus.  We, who pay attention, only know a "tip of the iceberg" of the murders and injuries from U.S. drone strikes and other air strikes that occur globally, and endlessly.  Where else in the world is drone killing occurring?  Hundreds of air strikes every day; It’s so easy.  But where, what and who?  And why?

We will continue to converge at Creech Air Force Base until the U.S. stops these insane, cruel and inhumane policies, and recognizes and respects all humans' right for life and judicial process.

Some Al-Shabaab militants have committed their own cruel and violent acts.  These violent acts we don’t condone.  But violence begets violence and for every new “recruit" the U.S. brutally murders in Somalia, Libya or elsewhere, even more will rise up from the burned ash.

OUR WEEK OF PROTEST AT CREECH:

A CHANGE:  During our blockade on Thursday, after the Las Vegas police promptly read the “riot act” thru a bullhorn, ordering protesters to disperse immediately or face the potential risks, such as “ arrest” or "physical pain and injury," the police did something quite different. In almost all past drone protests at Creech since 2009, protesters have been given a 5 minute warning to disperse AFTER the “riot act” is read.  This gives activists a choice to hold the blockade longer, or to not risk arrest. In last April’s action that warning was drastically reduced to 2 minutes.  This time we were all taken by complete surprise.  Absolutely no warning period was given to us at all.  LV police rushed toward us, arresting people as fast as possible.  A "blockade supporter," Chris Knudson, a white male, who stood in the roadway with us during the entire initial blockade, luckily managed to get off the roadway just in time, although an officer was trailing him closely.  He was NOT intending to risk arrest.
However, Ruben Beltran, who was on the shoulder of the road during most of the blockade, holding his sign “Would You Drone Your Child?”, was approached by a police officer where he had already been standing in the shoulder for some time.  He was handcuffed and taken with the 6 of us who were intending to risk arrest.
Why was Ruben arrested and not Chris?  Ruben is a Mexican immigrant turned U.S. citizen x 16 years now.  Ruben is also the only local resident in the town of Indian Springs, located directly across from Creech Air Force Base, who joins us. He has been regularly and courageously participating in our protests at Creech for years now, for which we are grateful.  In that small pro-military town, many residents are actually employed on the base. It brings jobs to a small “village” with even less employment opportunities since Creech AFB expanded 3 years ago and bought and shut down all of the commercial side of town, closing a restaurant, hotel, small market and trading post.  Ruben has not only lost friends in town because of his willingness to stand with us against U.S. military crimes and cruelty, but he faces regular intimidation from the local counter-protesters who live in his town.

Watch our protest HERE. Why was Ruben (on the far right side) arrested and not Chris?  Was it racism or his punishment for being the only local resident courageous enough to stand up for justice?  Or both?  Ruben was holding his own sign that morning:  “Would You Drone Your Child?"
Arrestees included:  Ruben Beltran, Fred Bialy, Toby Blome, Don Cunning, Michael Kerr, Eleanor Levine, and Joseba Zulaika.

ANOTHER CHANGE:  Activists were arrested at about 8:00 am in the morning. Most of the arrestees were held for exceptionally longer periods of time in the Las Vegas jail, compared to prior arrests at Creech.  While Eleanor and Toby were released at about 8:30 pm the same day (a normal average), all of the men were held for extended periods.  Mike and Don were released at 1:30 am, Ruben at 4:30 am, and Joseba and Fred were not released until 4:00 pm later that afternoon, after 30 hours in jail!  There seemed to be no rhyme or reason to their procedures, except to possibly make it harder or us to provide the best jail support from outside. Las Vegas is an hour away from our “base camp,” The Goddess Temple. The Las Vegas jail experience is one of the worst in the country.  A very abusive and racist bureaucracy with regular episodes of cruel and inhumane punishment taking place daily.  To speak up against any injustices witnessed while being detained there puts anyone at risk for threats of a longer stay of detention.  Read Frank Pauc’s story of his Arrest and Jail Experience at last year’s SHUT DOWN CREECH.

Many thanks to the 2 dozen activists who came from New Jersey, Hawaii, Utah, Indiana, California, Arizona and elsewhere to converge in the Nevada desert for a shared purpose:  to participate in a week-long stance against the illegal and brutal remote-controlled murder that takes place 24/7 at Creech Air Force Base.
Read Cecile Pineda’s moving story of our week long effort to ground the drones.

We had successful twice-daily, 2 hour-long, powerful vigils to speak out against the U.S. War Machine and it’s illegal drone assassination program. Very large banners and signs lined the highway every morning and afternoon as thousands of military and civilian employees flooded into and out of the base each day.

On Tuesday we wore black clothing and white masks for a funeral procession, with coffins to memorialize and honor the drone victims.  We ultimately processed into the entrance road to temporarily halt the killing machine, without risking arrest, in a “soft blockade,” leaving the roadway before a one minute warning was given.

That night at the University of Nevada, Las Vegas, we had a film showing of “National Bird,” followed by a superb presentation by Ray McGovern:  “Ethical and Legal Challenges Facing Drone Warriors.”  As a former CIA analyst under several presidential administrations, Ray had firsthand experiences and insights to add a fresh perspective to the U.S. drone program.

Later in the week, one vigil theme was:  "WAR IS A LIE,” and identified the misinformation apartatus that keeps Americans in the dark: “The President Lies,” “Congress Lies,”  “Generals Lie,” “Media Lies,” “The CIA lies.”

Another morning's vigil theme focused on the environmental threats of global militarism:  "The U.S. Military = #1 Polluter,” “War is Toxic to Our Mother,” “War is Toxic:  Depleted Uranium, Cancer, Nukes, Fossil Fuel, Napalm…”  etc.”  In the afternoon we modeled to the troops in a joyful way, how to care for "Our Mother” by tossing a giant Earth Ball up high into the air with a large colorful parachute, as they were exiting the base.

By the end of the week we had made a huge impact at Creech assassin drone base.  How many important conversations were had that week because of our presence?  We also had successful and broad national media coverage through a very short AP story that was picked up in nearly 20 states. (see below).

Norie Clarke volunteered to compose a letter to the Commander of Creech Air Force Base, with assistance from others.  Her letter is here:

This letter was signed by all of us, and was to be handed over to the police during our arrest.  The police refused to accept our letter or deliver it to the Creech Commander. We will find another way to deliver it.

We also wanted to draw attention to the 17th anniversary of the U.S. Invasion and continued Occupation of Afghanistan (October 7), an endless war that has left hundreds of thousands of Afghans dead, and tens of thousands with amputations and other injuries.  Afghanistan is the most droned place on earth. During our protest that day we wore sky blue scarves, symbolic of the Afghan Peace Volunteers' global campaign to Abolition War.  Just prior to our blockade on Thursday, Col. Ann Wright gave a very eloquent rallying speech, with an amplified system, about the violations against the people of Afghanistan, from the 17 year U.S. bombing campaign there.
Brian Terrell also spoke poignantly into the speaker system in hearing range of nearby police and military.

For more on the Afghan Peace Volunteers.

Why must the richest country on earth continue to wage war on Afghanistan, one of the very poorest countries on earth?  The Taliban are as vulnerable to drone strikes as Al-Shabaab Somali militants are.  Neither have an air force or any other air defense system, and thus they have no way to defend themselves against the unannounced Hellfire missiles that can rain down on them at any moment.  They are literally “sitting ducks” on the ground.  It’s quite amazing that the Taliban and Al-Shabaab forces continue to fight back against the U.S., with even more determination, in spite of the great technological disadvantage that they have.  Drones are the tools of an oppressive empire, used to control the most vulnerable populations of the earth, and to dominate the global political arena.

We celebrate the courage of whistleblowers like Chelsea Manning, who risked her own well-being and suffered terribly under the iron heal of the punitive military injustice system, because she dared speak out against the“asymmetry of warfare," which she voiced was a major motivator for her decision to leak the truth to the public.

We will continue to return to Creech Air Force Base twice annually, Spring and Fall, to make a strong stance against the injustice and inhumanity of it all.  Please join us when you can.

We hope you will be inspired to keep working for peace & justice by remembering this quote by James Baldwin, Black American writer:
“As long as white Americans take refuge in their whiteness, they will allow millions of other people to be slaughtered…”.
(Letter to Angela Davis, while she was serving jail time.)
Let us work together to stop the slaughter!