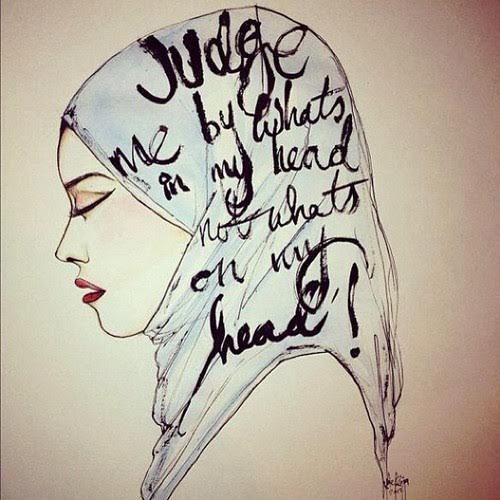 What comes to your mind when Hitler and the Nazis are mentioned? Killings, injustice, discrimination, atrocity and craziness, right?

Does it occur to you that Hitler was Christian and that therefore, his crimes should be attributed to Christianity? No! And that's how it should be.

What about the Israeli settlers who have attacked Palestinians 349 times just since October 1, including the infamous case in which 18-month-old Ali Dawabsheh was burned to death. His parents and older brother, Ahmad, who was 4 at the time, sustained critical burns over much of their bodies; the father died after a week, and the mother after five weeks. Should we blame Judaism and all Jews for this? Of course not. These Zionist settlers employ religion to justify their actions, but don’t represent an entire religion.

However, what comes to mind when ISIS is mentioned? In conversations and in the media today, their acts of terrorism are automatically linked to Islam and Muslims.

But why? Why should the entire population of Muslims be blamed for the acts of fewer than 0.1 percent? Why should terrorism be attributed to us as a general characteristic, when we ourselves condemn it? Why should we apologize for crimes we haven't done and don't approve of?

When wearing a hijab becomes an act of courage…

All of these questions, fueled with frustration and sorrow, go through the mind of every single Muslim these days. They float through the mind of Muslim girls who choose to wear a headscarf in a Western country, then leave their house praying they won't be verbally or physically abused because their wardrobe yells "Muslim!" In some cases, these girls—including friends of mine—feel forced to take their hijabs off after receiving threats and assaults.

Yet, the religion I follow orders me to do good, and never harm someone who has never harmed us. A religion that tells us that smiling in the face of your enemy is a good deed, a religion that orders us to give to the needy and to fast so that we can empathize with the poor. Never has the Quran or the Prophet Muhammad (peace be upon him) told us to kill the innocent and bomb civilians. In fact, the rules of war in Islam forbid the killing of innocents, children, women, the elderly, and the sick and unable. In fact, even cutting down trees during war is frowned upon in Islam! Our Prophet tells us, "Accustom yourselves to do good if people do good, and to not do wrong even if they commit evil."

Throughout history, many movements have cited religion to justify their actions to those ignorant of the true teachings. The Christian Crusades are just one other notable example. No form of terrorism should be supported—whether it be practiced by ISIS, the Egyptian military against its opponents, Israeli settlers and soldiers, or American drones. Witness what has occurred in beautiful Syria, transformed into a battlefield by Assad, America, Iran, Russia, ISIS, France and others. The mostly peaceful revolution of the people that began in 2011 has turned into a vicious free-for-all, driven in part by religion or fear of a religion. As a result, ordinary Syrians either are dying or fleeing refugees, only to be held accountable for the crimes of a movement that drove them out! 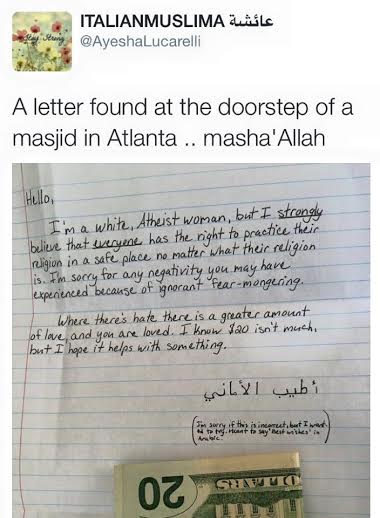 Still, amidst the fear and hatred are many bright spots, heartwarming stories that restore faith in humankind and cause hope to sprout anew. There’s the story of a woman who bought a Muslim man coffee at a Starbucks to apologize for Trump's bigotry, and of an atheist woman in Atlanta who left a friendly note near a masjid (place of worship) with $20, assuring that she believes Muslims are part of the country like anyone else.

And then there is a friend of mine from Lebanon, now studying in the United States, who posted this story:

“Due to everything that has been happening, I was advised to wear a hat instead of my hijab while traveling to Boston. However, because I wanted to feel comfortable, I went to the airport with my scarf on my head. It is because I wanted to feel complete and not empty that I went covered. It is because I wanted to travel in one piece, as a whole, not broken, that I traveled as my regular me. When I arrived, one of the security guards welcomed me with a smile and helped me print my baggage tags. Another one weighed my bag, asked me cheerfully where I was from and said how much he would love to visit Lebanon sometime. Another security guard complimented me on my scarf as he checked my passport and boarding pass and said he loved the design and it was good to see something different. Once I was inside the main terminal, waiting for my boarding time, I realized I was a little bit hungry and it would be good to get a sandwich. I walked and walked and the restaurants were still pretty far away so I decided to turn back and go to the gate again since I had only 10 minutes left. That is when an old guy sitting in a small cart offered to give me a ride to the restaurant. All of that was in addition to the regular smiles and thank you’s I got from my fellow passengers.

My point: Be you; smile to the person in front of you and ask God for the good people to be placed in your way. We have so many good people in this world.”

Such stories need to be circulated more to counter the negativity spewed in the media and elsewhere. Hate should be fought and love should be fostered!

Fatema Dabdoub, 20, is a writer from We Are Not Numbers. She was born in the United States, but her family relocated to Lebanon when she was 5 years old. Both of her parents are Palestinians and were born in Lebanon. She lives in Saida in an area located close to two camps, Ain Al Helwa and Al Miyya wa Miyya. Fatema currently is a student at the American University of Beirut, where she is pursuing a bachelor's degree in biology and is a pre-medical student.