5 Actions You Can Take Immediately Against SB 1070 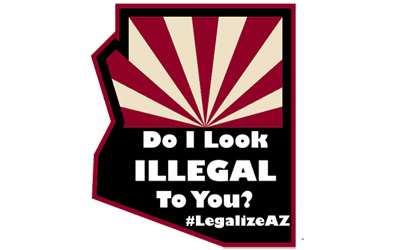 SB 1070, which makes being undocumented a crime, shows us that we are becoming a country that asks for “your papers, please” much like in Nazi Germany where “Papiere, Bitte” meant the same in German.

At CODEPINK, we know that it is not enough to just elect women to office. Despite what Governor Brewer says, racial profiling is officially legal in Arizona given that there is no other way to determine what an undocumented person looks like beyond brown skin, which would serve as a proxy for criminality–the crime of not carrying proper identification and a birth certificate. And while the law is a slippery slope to losing more civil liberties, SB 1070 has gifted us a great opportunity to organize for immigrant rights on a new scale.

While lawsuits seeking an injunction are likely to be filed by this coming week, here is what you can do in the meantime to oppose this racial profiling law:

1. Sign the email petition to your Congressional representatives, the Obama Administration and the Department of Homeland Security asking them not to cooperate with SB 1070, file  injunctions to the law, and furthermore, start taking leadership in pushing for real comprehensive immigration reform.

2. Hold local solidarity actions and add them to this growing list. Take down details of contacts. Connect with local grassroots organizations and student groups that are leading the effort. Be prepared to talk to the media about why you oppose SB 1070 and how this law is not just about Arizona but about what kind of country we want to live in as Americans.

3. Boycott, Divestment and Sanctions. Rep Grijalva has called for an economic boycott of Arizona, which means not traveling to Arizona and avoiding the expenditure of any dollars in Arizona.

Others are asking the California Public Employees’ Retirement System (CalPERS) to divest from Arizona and for the Major League Baseball move the 2011 All-Star Game from Arizona. There is a growing number of people in support of boycotting the Diamondbacks as well.

The City of San Francisco is now considering cutting any and all contracts with the state of Arizona.

4. Civil disobedience. Take a hint from the Capitol Nine who chained themselves to Capitol building doors. Leave your licenses at home. Walk out of schools and walk into local Congressional offices of politicians who have not cosponsored the DREAM Act and refuse to stand up for immigration reform. Conducts sit-ins, hunger strikes and flash mobs. Offer to get yourself detained wearing t-shirts and carrying signs that say “Do I look like an ‘illegal immigrant’ to you?” or “Being Brown is Not a Crime.”

5. Use Online Tools to Organize. Use hashtag #LegalizeAZ on Twitter to connect with more people taking action against SB 1070. Change your Facebook profile picture to the badge above (or something similar) to show solidarity.  Also join the Facebook group 1 million strong against SB 1070 and don’t forget to follow growing immigrant youth taking actions on Twitter and Facebook.


The possibilities are endless. Consider this an open thread and invitation to share your ideas and actions and feel free to cross-post. This is just the beginning.