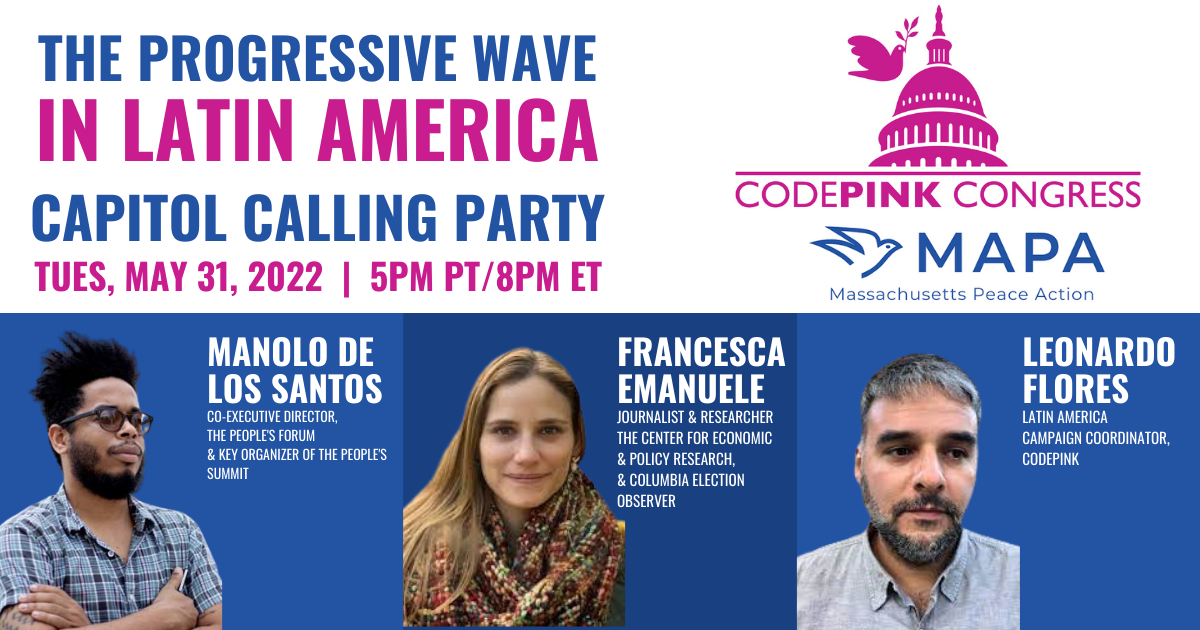 On Tuesday, May 31, join CODEPINK Congress and Massachusetts Peace Action for an energizing Capitol Calling Party focused on the progressive wave in Latin America and the upcoming People's Summit, a grassroots alternative to the Summit of the Americas.

As Chair of the Ninth Summit of the Americas, the United States refuses to allow Cuba, Venezuela or Nicaragua to participate in the June meeting in Los Angeles. In response, Mexico says it won't participate either. Sounds like the summit - a huddle of arms buyers & free market cheerleaders - could be a bust. Enter the People's Summit, a grassroots alternative, slated for June 8-10th, also in LA. The People's Summit will include discussions of the changing landscape in Latin America, where progressives in Chile and Honduras are winning elections to challenge neoliberalism, militarism and privatization. Join us on CODEPINK Congress for a discussion with special guests Manolo de los Santos of The People's Forum and Francesca Emanuele of the Center for Economic and Policy Research. This call will also be hosted by Leonardo Flores, who is a Latin America campaign coordinator with CODEPINK.

Manolo de los Santos is the Co-Executive Director of The People's Forum and a key organizer of The People's Summit, a progressive gathering June 8-10 in Los Angeles to counter to the official Summit of the Americas. Manolo is a popular educator and organizer from the Caribbean who is engaging a new generation of internationalists.

Francesca Emanuele is a researcher with the Center for Economic and Policy Research, a progressive think tank founded by economists Dean Baker and Mark Weisbrot. Francesca is also a Peruvian journalist, Colombia election observer, and a Ph.D. student of Anthropology at American University in Washington, DC.