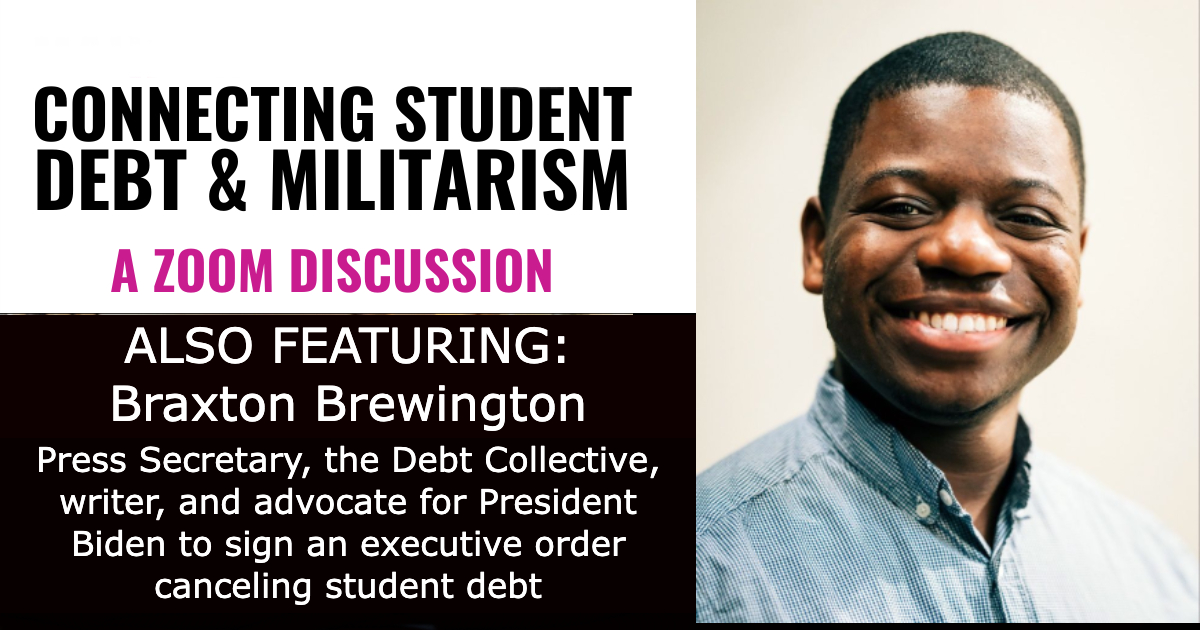 On Tuesday, January 4, join CODEPINK Congress as we discuss the movement to forgive student debt, and why it's a necessary part of building a strong movement against militarism. "Can't afford debt forgiveness"? We've heard that line before, while Congress barely blinks as it passes a $778 billion military budget. Our runaway military budget robs us of resources to meet needs at home, including education, health care, housing and more. Foreign policy is domestic policy, and vice versa.

Author and progressive activist Marianne Williamson warns that the Biden administration and Democratic Party must stop dragging their feet on student loan forgiveness, minimum wage reform and COVID relief -- or face defeat in the midterms.  President Biden has paused student debt repayment until May, but a pause is not enough.
As our other guest, Braxton Brewington, writes: "Debt cancellation would be one of the largest bottom-up economic stimulants in U.S. history, creating millions of jobs and boosting annual GDP by up to $108 billion per year for the next ten years."
As student loan debt tops $1.7 trillion, 43 million people suffer financial and mental hardship long after their college years. Some turn to military service to pay off their loans, trading one hardship for another. With so many students in debt, working and going to school, there's little time on- or off-campus for activism. To keep our students in debt is to keep them quiet...but only for so long!
Special Guests:
Marianne Williamson is a bestselling author, advocate for student debt forgiveness, and was a 2020 Presidential candidate. For over three decades Marianne has been a leader in spiritual and religiously progressive circles. She is the author of 14 books, four of which have been #1 New York Times best sellers. Williamson founded Project Angel Food, a non-profit that has delivered more than 13 million meals to ill and dying homebound patients since 1989. The group was created to help people suffering from the ravages of HIV/AIDS. She has also worked throughout her career on poverty, anti-hunger and racial reconciliation issues.
Braxton Brewington is the Press Secretary for the The Debt Collective, a writer for TruthOut and Common Dreams, and an advocate for President Biden to sign an executive order canceling student debt.