Where Can the Anger Go? 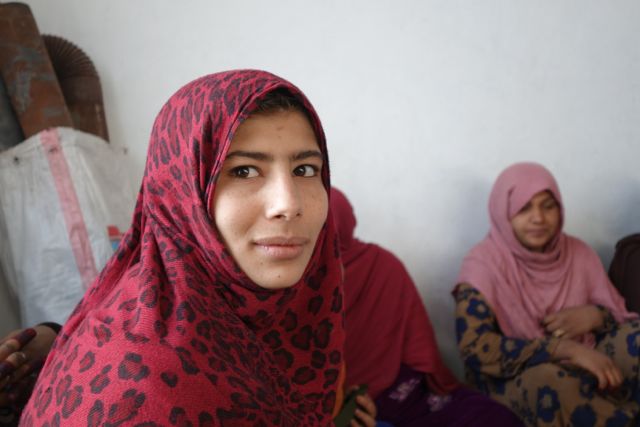 Ramzia, an IDP from Laghman province, works in the JRS kindergarten in “Police” refugee camp while two of her brothers are paid by a shopkeeper to pack potatoes into sacks.

Writing from Kabul, Carolyn Coe describes experiences of frustration, outbreaks of rage and efforts to cope.

Kabul—At a busy four-way intersection in the northwestern part of Kabul, traffic is stuck. There is no traffic signal, and cars are threaded through one another like a woven rug.

A passenger car is in front of our taxi. The driver, with two children in the car, has managed to wedge into position, perpendicularly blocking three rows of cars. On the other side of his car are vehicles headed in the direction he came from, and another line of cars is trying to cross in front of his. The driver with the children cannot move anywhere.

Soon, an angry man approaches on foot, placing his hands on the hood of the family vehicle and shouting at the driver. The man walks from the hood to the driver’s side window and back again, shouting. Now the driver cannot move his car forward without hitting the man. He absorbs the verbal abuse without gesticulating or yelling back.

Twice a traffic police officer walks by, trying to untangle the knot of traffic. The angry man continues to yell in front of the car. Meanwhile, two other drivers step out of their cars and start yelling at the man though they don’t approach closer.

Eventually, the angry man walks away, and the traffic knot loosens. The family car manages to clear the intersection, and our taxi finally turns left.

I reflect afterwards how this flare-up is representative of the underlying tensions in Kabul after decades of war, where any situation or statement may soon explode in anger. A precarious balance exists between the venting of frustration and the descent into physical violence.

On November 15, a violent altercation in the men’s dormitory at Kabul University, the preeminent Afghan university in the city, resulted in one student’s death and several injuries. The inter-ethnic clash soon spilled into the streets. The university promptly closed the men’s dormitory, abruptly obligating its residents to find other accommodation, and moved up the final exam dates so that the university could end the semester early.

Reports of the violence at the university spread by social media, reports that two university students tell me drew from deep-seated ethnic biases instead of being a search for a clear understanding of the facts or for a nonviolent approach to resolving the escalating inter-ethnic tensions.

A half hour before today’s road rage, in Kabul’s Char Rah-e Qarbar neighborhood, I met Ramzia, age 17. Ramzia is a student at the JRS school in a camp for refugees and internally displaced people (IDPs). The living quarters in the camp are crowded. Multiple families might share one simple mud home with their sheep and other livestock. Such tight spaces combined with traumatized residents fuels tensions, and Ramzia told me that she didn’t use to know what to do with her anger. “I would keep the anger in my heart,” she said.

Ramzia’s family fled the violence in Laghman province, violence that prevented her from continuing her studies beyond the fourth grade. In the camp, she was able to resume her studies and just completed a dozen life skills classes. The women’s life skills classes, in partnership with JRS, were led by Elina, one of the Afghan Peace Volunteers (APV) who do various volunteer projects in the city. The curriculum included trauma healing, permaculture, nonviolent conflict resolution, storytelling, nonviolent communication, and relational thinking skills.

Ramzia said that the most valuable lesson she learned from Elina was to take slow deep breaths when she became angry. “When I do that,” she said, “I feel calmer and happier.”

Ramzia now has some part-time employment in the camp. From 9 to 11 each morning, Ramzia works in the JRS kindergarten, skipping rope and playing ball with the children. The kindergartners living in the camp will grow up facing the same daily frustrations that Ramzia does, living with no electricity and non-potable water, and trudging along unpaved camp paths that turn to mud each spring.

Naser, an APV who was co-teaching the life skills classes for men in the camp, believes the most important thing they shared with the men was how they might behave differently with their parents and siblings. “The parents behave a bit violently with their children, and the brothers behave violently with their sisters,” Naser said. “If children do something wrong, [the parents] don’t ask why or what happened. They just shout at them, beat them.” 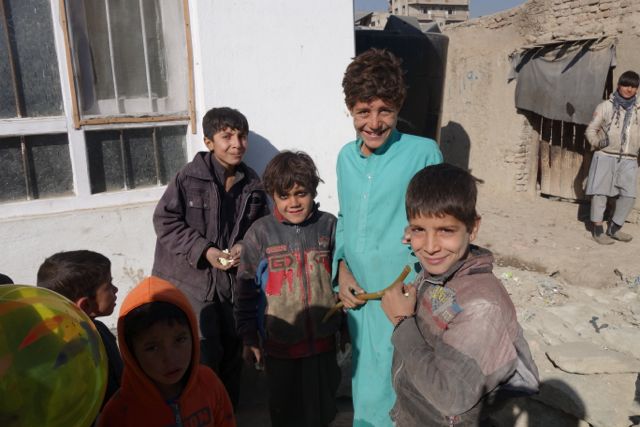 A boy standing in front of the JRS school in a refugee camp holds a rubber hose like the type used by some teachers to strike children who fail to learn their lessons. Other children hold the raw cauliflower florets they are munching on. The permaculture lessons during the APV-led life skills classes encouraged students to grow vegetables in small containers beside their homes. Greenery beautifies, has a calming effect, and is a small step toward combating air pollution.

After the first nonviolent communication lesson, Naser and his co-teacher Hakim assigned homework to each student. The students were to talk to their parents and siblings about their feeling as well as their favorite food. Before doing the homework, none of the students knew what his parents’ or siblings’ favorite food was as they were not in the habit of sharing their feelings. Naser said, “The next week, they were happy because they were talking about the future with their families.” The students said they’d buy their family members’ favorite food for special celebrations.

The value in teaching life skills, such as what to do with one’s anger and to share one’s feelings, is in its ripple effect. Through these lessons, Ramzia has a tool to help find a calmer way to respond to a four-year-old child at the kindergarten who is acting out or with a neighbor with whom there’s a disagreement. Others might take a moment to try to understand a situation before acting upon it. The skills can help shift how people engage with one another.

Still, educational opportunities are few. There is no government school in the IDP camp to serve the 700 families, so instead of attending school, children spend their days playing in the dirt paths or working as child laborers outside the camp. For any who may attend school, life skills classes are not a part of the regular curriculum.

Carolyn Coe traveled to Kabul on behalf of Voices for Creative Nonviolence (www.vcnv.org) While there she was a guest of the Afghan Peace Volunteers (ourjourneytosmile.com)