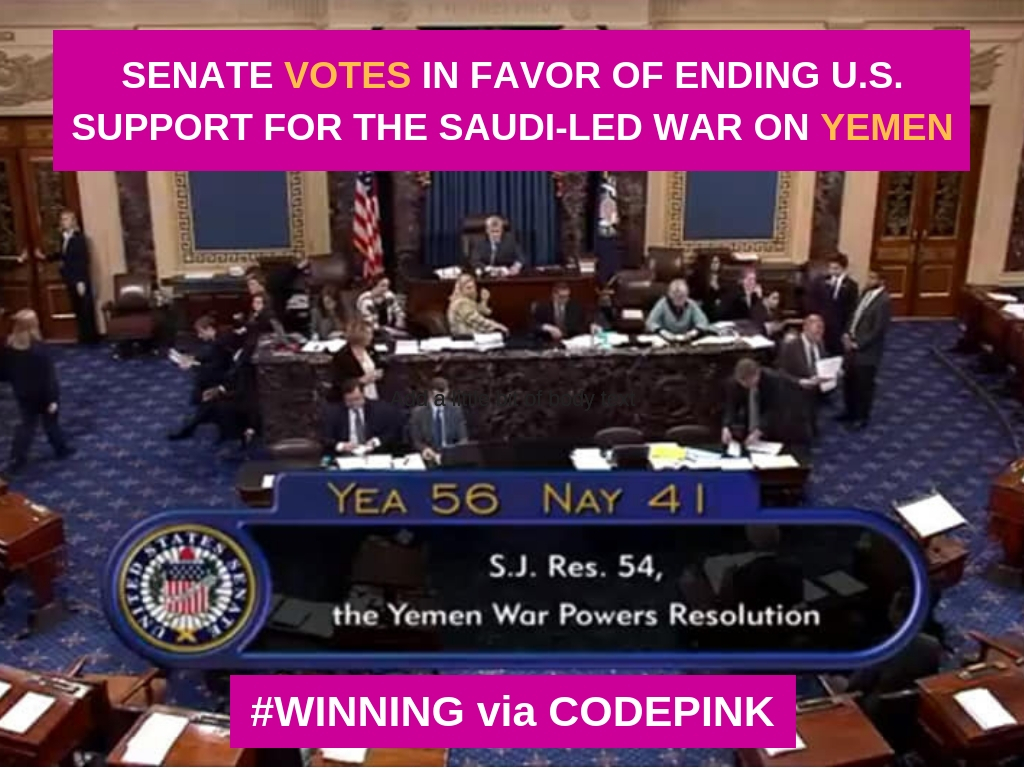 We are so happy to share this wonderful news with you. This afternoon, the Senate had their final vote on S.J.Res.54 - recommending an end U.S. support for the Saudi-led war on Yemen. The outcome was 56 to 41 in favor!

We have been working to end the war on Yemen for years and today we are celebrating. This is a big step forward and is energizing. We are using this moment to step up our efforts to counter militarism everywhere: from deaths in Yemen to the devastating impact militarism has on the environment.

Add you name to our letter to Representative-Elect Alexandria Ocasio-Cortez thanking her for drafting the Green New Deal and suggesting some additions to it to acknowledge the existence of the U.S. military as an environmentally destructive force, and the enormous U.S. military budget (over 60% of discretionary spending) as a potential source of revenue for green initiatives. You can read Medea’s piece in Common Dreams about the need for the Green New Deal to include a New Peace Deal.

Today’s vote was a total rebuke of Trump and his administration’s alliance with the Saudi regime. Along with passing S.J.Res.54, the Senate also approved this afternoon a non-binding resolution recognizing that Mohammed bin Salman was responsible for the murder of Washington Post journalist Jamal Khashoggi.

This is an important moment and we must use this momentum. Sign our letter to Alexandria Ocasio-Cortez asking her to include a New Peace Deal in the Green New Deal and stay tuned for next steps to continue our work to end U.S. involvement in the Saudi-led war on Yemen.