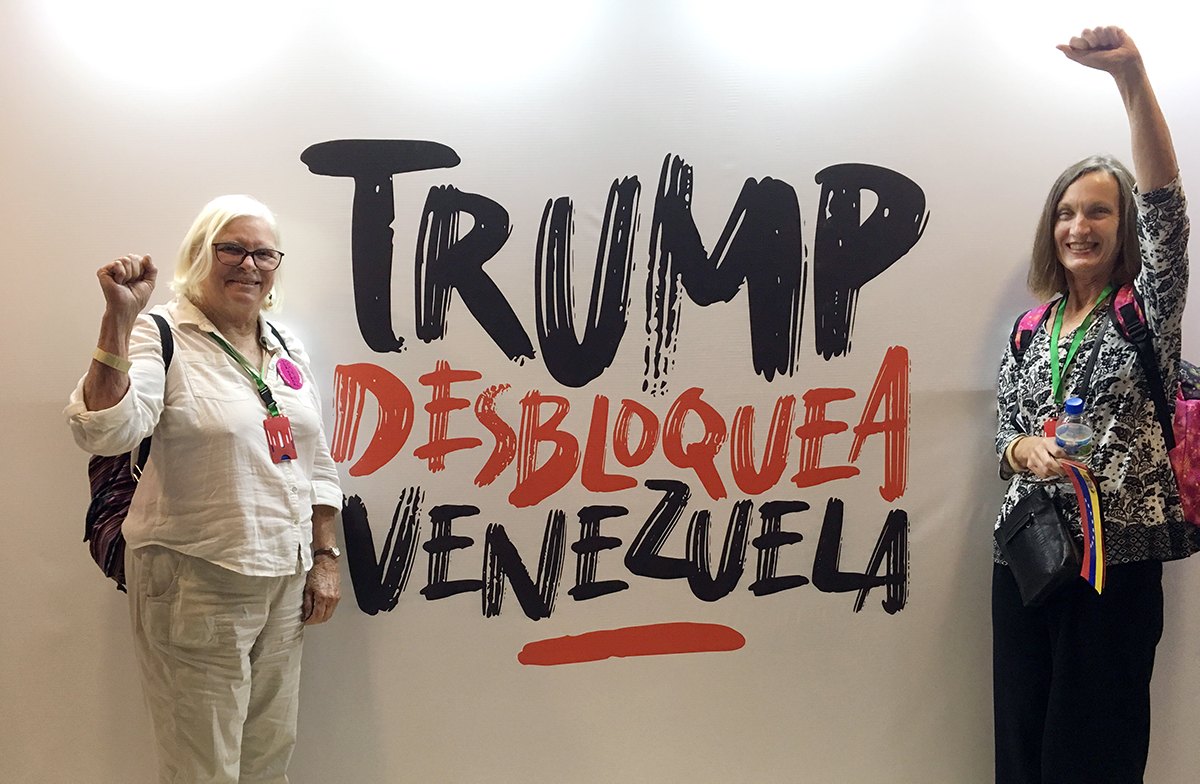 Teri Mattson (right) with Paki Wieland during the Embassy Protection Collective delegation to Venezuela this year.

I called home on Mothers’ Day. Sitting on the front step, I had a strong WiFi signal; good enough to make an audio (but not video) call from Caracas.  Two months prior my parents had asked how they could communicate with me while traveling Venezuela.  I quickly told them to download WhatsApp and gave them a brief tutorial on chatting and calling.  The success of this form of communication has a lot to do with the infrastructure available, not censorship.  The data here is 3G and the WiFi does not offer the bandwidth for heavy traffic or visual calls.  It’s tough to upgrade infrastructure when the country’s financial assets have been frozen and/or seized.  The front step of my house in La Pastora was the solution.

My mom was pleased to hear my voice and, to my alarm, relieved to discover I was just fine. News back home illustrated a country on the verge of collapse.  A war zone. I told her I went to the movies Saturday afternoon.  A lovely art house screening of The Guersey Literary and Potato Peel Pie Society.  I took the Metro from Cano Amarillo to Parque Miranda:  Westside barrio to Eastside middle class.  The Park is enormous and abuts the La Carlota airbase.  Parque Miranda was full on Saturday afternoon.  At one time, Parque Generalissimo Francisco de Miranda was only accessible to white upper-middle-class citizens.  Now, everyone uses it.  Upon opening in 1961, the park received 6,000 visitors a month. Today, monthly visitation exceeds 200,000.  I walked the park, sharing paved paths with children on bicycles, elderly couples strolling hand-in-hand and teenagers cajoling one another about returning to school on Monday.  The park has a well-maintained aviary with a variety of tropical birds and a large cat compound which is home to a healthy jaguar.  After the park, I walked the few blocks to the movie theater.  The film ended at dusk.  And, still, I used the Metro to return safely home. Our phone conversation took a turn when my mom heard “La Carlota.”  Yes, I told her.  The very same La Carlota made famous in the US media on April 30.  That Tuesday every communication app on my phone starting pinging at 6:00 am.  I woke up overwhelmed by the number of messages arriving from the US; actually, all from the US.  I chose to open the first I received:  a Facebook message from a Venezuelan friend back home.  He sent Juan Guaido’s sunrise Twitter video.  I watched in awe and concern.  Here was a well-crafted image of Venezuela’s “self-declared president” calling for a national uprising with the sun coming up over Mount Avila behind his shoulder.  It was clear to those of us in Caracas that Guaido was not actually on the La Carlota airbase as my mother insisted.  But it was worthy news.  So much so that I woke up my Chavista housemates.  They watched a few moments of the Twitter video and rolled their eyes at me. “Teri, they do this stuff all the time.  It’s normal.  Go back to sleep.”  Huh? Three hours later, it was over. But not on CNN.  As CNN continued to recycle the same 30 minutes of tear gas engagement, a large crowd was gathering at Miraflores a short walk away. The size and volume of the crowd grew all morning.  From La Pastora, we could easily hear chants in support of the elected government and calls for peace.

I had been on the phone to California for a good 20 minutes when I began to hear, in the background, neighbors arriving my parents’ house.  They were beginning to gather for Mother’s Day brunch.  My mom told everyone to be quiet so she could hear me. One called out “does she have any food to eat?”  Part of my housing arrangement in La Pastora was for me to buy the family groceries in lieu of paying rent.  My first grocery shopping experience was on Holy Saturday.  Not much was open the entire week of Semana Santa.  So, my housemates and I ventured to the predominately-Jewish district of San Bernardino.  Here, we found a corner grocery open and busy.  The market rivaled any in midtown Manhattan or San Francisco’s Marina district.  Inside was a butcher’s counter.  We chose a fresh, whole chicken raised in Venezuela, four small patties of ground Venezuelan beef and a frozen imported pork loin.  At the deli counter, we ordered 1/4 pound of sliced imported ham and 1/4 pound of sliced white Venezuelan cheese.  The fresh tomatoes, peppers, onions and mangos were all grown in Venezuelan.  The flat of 15 eggs was raised in Venezuela as well.  And, then, there was the domestic bag of papas fritas (potato chips); no Lays potato chips to be found in this store.  Our bill was $36 US or about 3 1/2 months household income for my friends.  I paid in cash US.  I was offered an exchange rate of 5400:1 vs the 3300:1 I received upon arriving Venzuela the prior month. Small bills (1s and 5s) are widely accepted.  The dollarization of the Venezuelan economy has begun.  At this particular grocery, the owners were overt in their preference for dollars. With US dollars, they could continue to import goods on the foreign market.

The chicken purchased on Saturday was to be prepared as part of Easter Sunday dinner. Our neighborhood lost power Easter morning which meant the pumps stopped sending water to our politically-mixed neighborhood as well.  And, then, the most anti-US mainstream Media thing happened:  cooperation.  No screaming, no yelling, no banging on pots and pans, no anti-government epithets, no pro-Guaido chants.  Everyone helped secure water for each household and then packed up their holiday food, their children, folding chairs and towels and headed to the beach for the day.

The phone conversation languished for a moment until, this time, my mom heard a noise in the background on my end.  The children had come out.  The street that the front porched faced began to fill with sounds of laughter and screaming and running and a basketball dribbling…the sounds of play and the joy that comes with it.  A typical gathering of kids filling a holiday lull playing and waiting for their parents to call them back into the house to begin a formal Mother’s Day celebration. My mom said:  “it sounds so normal there.”  I said:  “Happy Mother’s Day from Venezuela.”

Teri Mattson is the Latin America campaigner for CODEPINK.  She recently returned from an Embassy Protection Collective delegation to Venezuela.  In March, she led an Anti-Sanctions Campaign delegation to Venezuela and remained in Venezuela through May.  Her personal anecdotes are reflections of her experiences living among working-class Venezuelans in urban and rural communities.