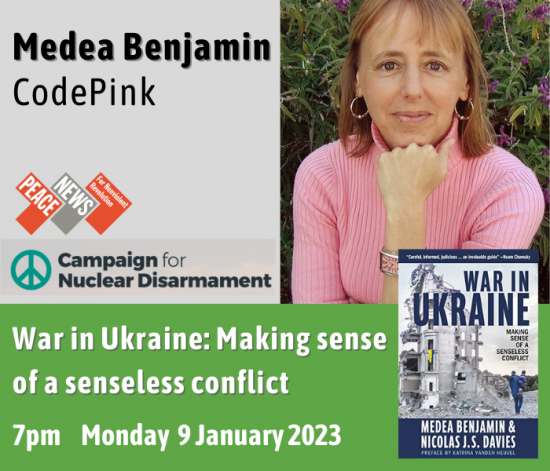 Russia’s brutal February 2022 invasion of Ukraine has attracted widespread condemnation across the West. Government and media circles present the conflict as a simple clash between an evil empire and an innocent victim. In her new book, War in Ukraine: Making Sense of a Senseless Conflict, US peace activist Medea Benjamin and her co-author Nicolas Davies insist that the picture is more complicated.

Russia’s aggression was reckless and indefensible. But Medea Benjamin argues that the West breaking its promises to halt the eastward expansion of NATO played a major part in prompting Putin to act. As did US involvement in the 2014 coup in Ukraine and Ukraine’s failure to implement the Minsk peace agreements.

According to Benjamin, ‘Continuing to arm Ukraine can only prolong a conflict that needs to be resolved by diplomatic means. Without such a solution the number of Ukrainian and Russian casualties will continue to mount and the risk of serious escalation, including the possibility of nuclear conflict, will intensify.’

Medea Benjamin is the co-founder of the women-led peace group CODEPINK, and the author of 10 books including Kingdom of the Unjust: Behind the U.S.-Saudi Connection and, now, War in Ukraine. To take just two examples from her decades of activism: Medea was at the forefront of the anti-drone movement, leading delegations to Pakistan and Yemen to meet drone strike victims, and she was tear-gassed, arrested and deported by the Bahraini government in 2012, when she was part of a human rights delegation to Bahrain in support of democracy activists.

This event is co-sponsored by Peace News and the Campaign for Nuclear Disarmament. It will be chaired by Tom Unterrainer, chair of CND.