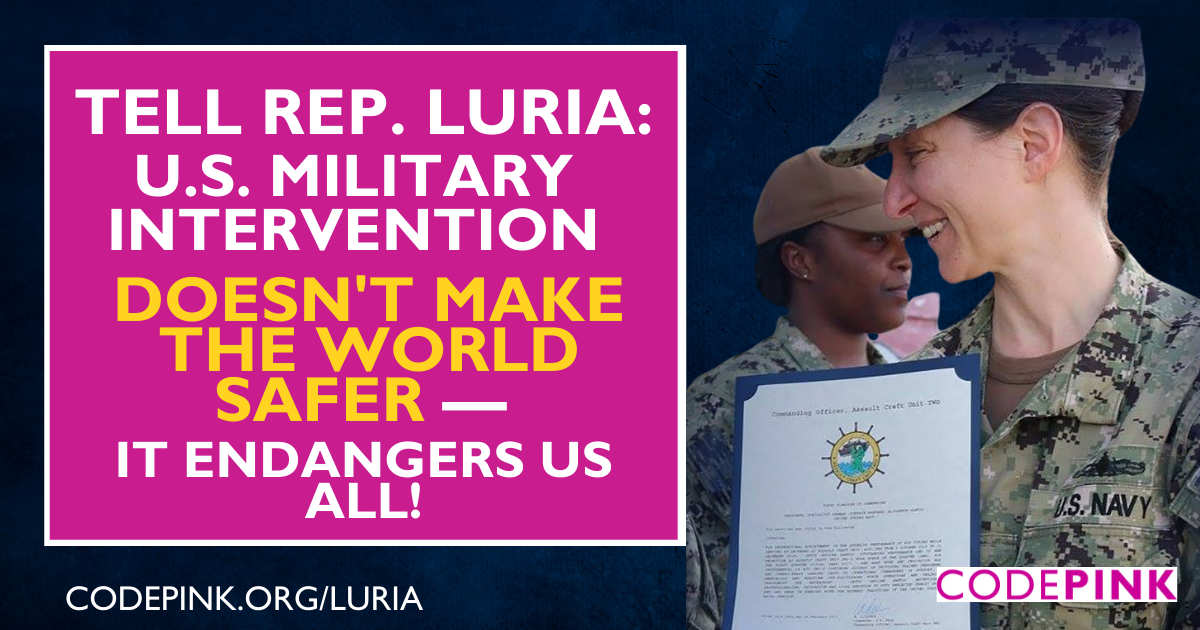 If you live in Representative Luria’s district (2nd Congressional district in VA, including the cities of Hampton, Newport News, Norfolk, Poquoson, Virginia Beach, Williamsburg), click HERE to directly send a letter to Luria! Otherwise, sign the letter below!

U.S. Congress Member and Navy Veteran Elaine Luria (D-VA) wants to give Biden the power to go to war with China without Congressional approval while U.S. citizens at home suffer from food insecurity, healthcare and housing inequality, climate catastrophes, and more!

Luria is advocating for the passage of Republican Senator Rick Scott’s Taiwan Invasion Prevention Act. The bill would endanger the entire planet by expanding President Biden’s authority to go to war with China over Taiwan.

This is a page right out of the U.S. Military-Industrial-Congressional Complex’s playbook, and we’ve seen it end before in mass death, devastation, and cyclical violence many times in countless regions across the world.

Tell Rep. Luria to stop advocating for war with China while U.S. citizens are suffering at home! Ask her to support life-affirming policies instead! Read our action alert here.

As a concerned citizen, I am reaching out to ask that you stop advocating for an expansion of President Biden’s war powers through Senator Scott’s Taiwan Invasion Prevention Act or through any other means. More overseas U.S. Military interventions won’t make Americans any safer; they will only endanger us and the entire planet!

Your recent op-ed in the Washington Post, “Congress must untie Biden’s hands-on Taiwan,” argues that this expansion of the President’s authority to go to war with China over Taiwan would “de-escalate the situation” and “deter an all-out war.” Yet, a U.S.-China conflict would in fact constitute a global conflict, a conflict which could easily turn nuclear, risking nuclear winter and planetary extinction. Furthermore, a top Taiwanese security official, National Security Bureau Director-General Chen Ming-tong, has also stated that the chances of a war with China within the next few years are “very low.”

In order to truly “deter an all-out war,” we in the U.S. desperately need you to use your power in office to support life-affirming policies that address food insecurity, housing and healthcare inequality, climate catastrophes, and much more.