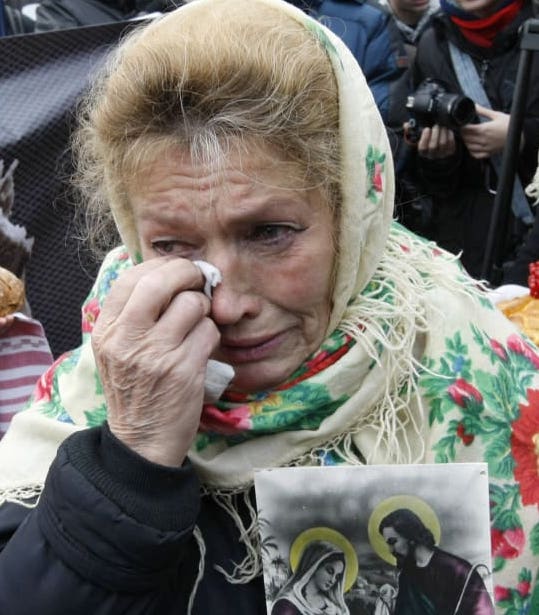 This is URGENT! President Biden has just ordered 8,500 U.S. troops to be on heightened alert for possible deployment to Eastern Europe, as the dangerous escalation at the Russian/Ukrainian border intensifies. Biden is also considering sending more warships and aircraft, and has already delivered more “lethal aid” to Ukraine. The Pentagon has said that there is the possibility of sending as many as 50,000 troops!!!

Join an emergency webinar discussion between CODEPINK'S Medea Benjamin and retired Army Colonel Larry Wilkerson today at 4:00 PM EST. Larry Wilkerson is a professor at the College of William & Mary and was chief of staff to U.S Secretary of State Colin Powell. After ending his military career, Wilkerson publicly criticized the Iraq War and has been a vocal opponent of U.S. policies that put militarism before diplomacy.

RSVP FOR THE WEBINAR HERE!

The U.S. and NATO, whose Response Force is composed of some 40,000 international troops, are exacerbating a conflict that could easily result in war between the world’s two most heavily armed nuclear states – the United States and Russia. We must immediately demand that NATO, the U.S., Russia and Ukraine pursue vigorous diplomacy for a negotiated solution. There is every reason to believe that a compromise can be made with Russia, including a guarantee that Ukraine will not become a member of NATO.

RSVP for today’s webinar and send a message to your representatives in Congress, telling them to pressure Biden not to go to war with Russia over Ukraine. Tell Congress that you want negotiations, not escalation.

Since 2015, the Minsk II Accord has successfully prevented a new escalation of the civil war in Ukraine. But the United States and NATO have encouraged the Ukrainian government to ignore its obligations under Minsk II, and to instead reassert absolute sovereignty over the Donbas region. They have supplied powerful weapons, which Ukraine has deployed and used in Eastern Ukraine.

Russia has always been opposed to NATO’s eastern expansion to its borders, and it is determined to stop Ukraine from entering NATO. In 2008, when Ukrainian President Viktor Yushchenko first applied for NATO membership, President Putin called Ukrainian membership "a direct threat" to Russia. NATO is a military alliance that should have dissolved with the dissolution of the Soviet Union and the Warsaw Pact. It should certainly not be expanding to include Ukraine.

Rather than NATO dissolving with the Warsaw Pact, as it should have done, it has violated the agreements that brought the original Cold War to an end and reunified Germany. Instead of keeping its promise not to expand eastward, it has added 11 member countries that were once either Soviet republics or members of the Warsaw Pact.

Now the situation is teetering on the brink of a massive war. The time to speak out is now!

Join the webinar on the crisis in Ukraine and tell Congress not to let Biden send troops to Eastern Europe!