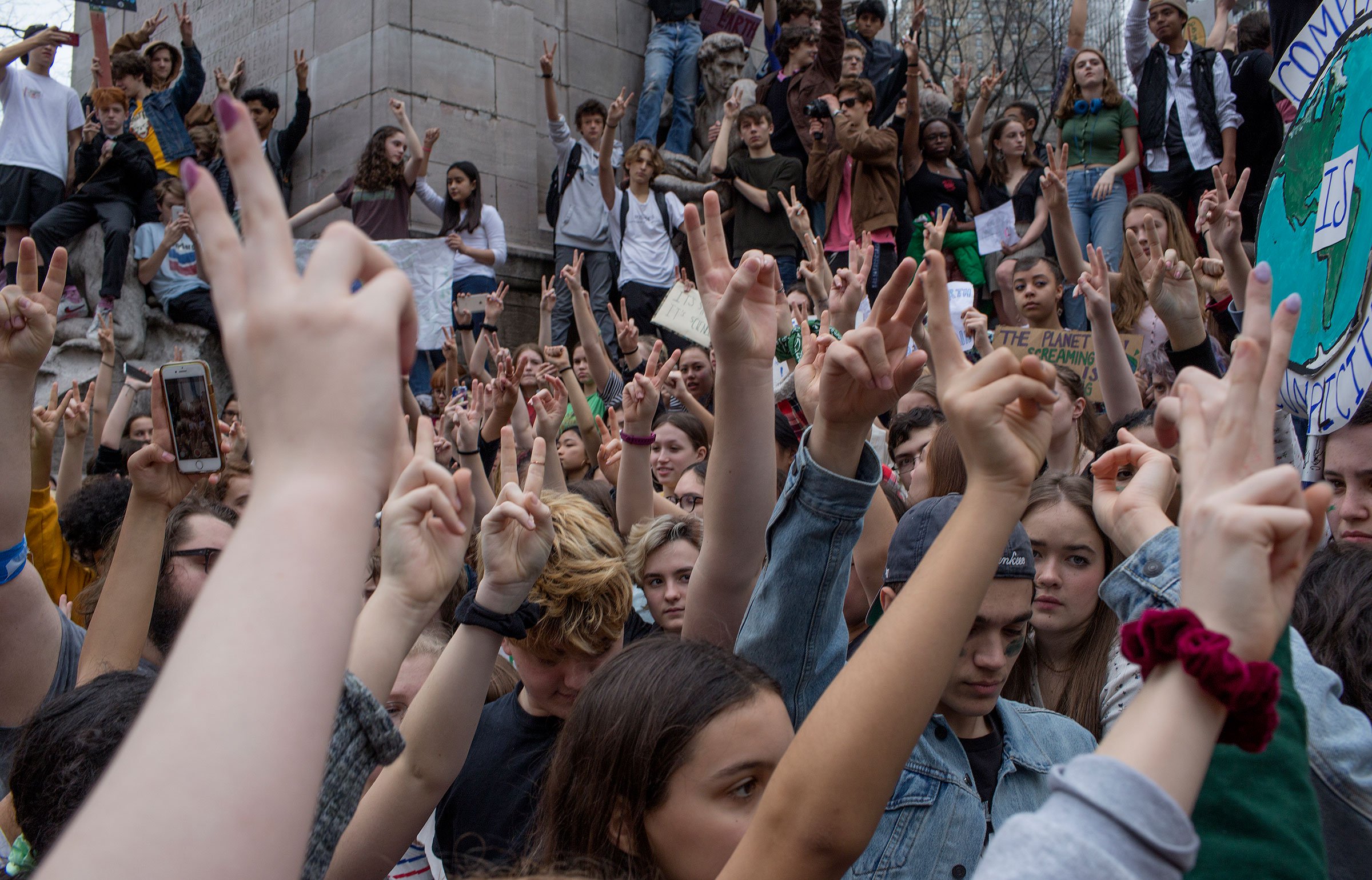 Talk of the next world war is in the air. In this iteration, however, those sounding the battle horns aren’t pushing for a clash between the planet’s civilizations but a campaign to save the planet itself. “We need to literally declare war on climate change,” environmentalist Bill McKibben, the founder of 350.org, has urged. “This is our World War Two,” declared the wildly popular Rep. Alexandria Ocasio-Cortez.

World War II is frequently cited as an inspiration for the scale of concerted effort required to avert atmospheric Armageddon. Writing in The Guardian on June 4, for example, economist Joseph Stiglitz proclaimed: “The climate emergency is our third world war. Our lives and civilization as we know it are at stake, just as they were in the second world war.”

Further, McKibben has also exhorted, “Fighting this war would be socially transformative … just as World War II sped up the push for racial and gender equality.”

Such representations of World War II dangerously sanitize and idealize an exercise of staggering violence that left deep, lasting scars of human and environmental devastation in its wake. Nuclear annihilation was rained down on Hiroshima and Nagasaki. Entire cities, including Dresdenand Tokyo, were destroyed by indiscriminate firebombing. For the first time in history, the civilian death toll outnumbered combatant casualties.

While fighting the “good war” against Germany’s racist ideology was heroic indeed, it’s also true that allied forces themselves perpetuated racism. The U.S. (and Canada) turned back boats of Jewish refugees fleeing the Nazi government and interned more than 100,000 citizens of Japanese descent in camps, setting a precedent for racist policymaking that continues to haunt the present.

Indigenous nations were dispossessed of 1 million acres of their territory, including for the purpose of Japanese internment. Black American soldiers were confined to segregated regiments and denied veterans’ benefits; several who survived the war returned home only to be lynchedby white mobs.

What Stiglitz described as a fight for “civilization as we know it” was premised on the colonial divide between “civilized” Europeans and the non-Europeans they ruthlessly dominated and exploited. The uranium for the U.S.’s nuclear bomb, for example, was obtained using forced African labor from mines in the Congo, where Belgian colonizers enforced their rule by notoriously vicious means.

Some of the worst state responses to climate disruption already look like war.

World War II also spurred the U.S. military to construct hundreds of overseas bases, most of which still remain 60 years later. Built on land expropriated from local residents, these bases pollute the soil, deforest the land and contaminate the drinking water, such as the Kadena Air Force Base in Okinawa. Islands belonging to the United States but inhabited by people of color, such as the Marshall Islands and the Bikini Atoll became the testing grounds for nuclear weapons, and their inhabitants still experience exceedingly high rates of cancer. The Cold War that followed WWII also led to the U.S. and the Soviet Union sinking enormous resources into the nuclear arms race, and other countries, including China, the U.K. and France, developing their own nuclear weapons.

World War II liberated Europe, but back in the U.S. it prompted Congress to pass a series of laws suppressing dissent — all of which remained on the books long after the war was over. National security agencies took advantage of the opportunity to extend their tentacles of surveillance, including by warrantless wiretapping. Some 6,000 conscientious objectors were imprisoned, comprising a full one-sixth of the federally incarcerated population at the time.

Even the fabled war-time emancipation of women is only a partial truth. While white women constituted 40 percent of all aircraft industry workers, for instance, Black women and men combined never amounted to more than 6 percent, and many workplaces prohibited Black employees from even using the same bathrooms as their white co-workers.

Meanwhile, the biggest economic beneficiaries of the war were a select group of corporate interests: According to a Senate report on “Economic Concentration and World War II,” 40 percent of the $1 billion invested by the government in scientific research went to just 10 large corporations.

The persistent refrain that we need to wage war on climate change obscures how some of the worst state responses to climate disruption already look like war. Militaries have been conducting “war games” to train for climate disasters. Soldiers and private military contractors are being deployed to manage the aftermath of natural disasters intensified by global warming. This has frequently involved brutality against the very people they purport to be protecting — as in 2005, when Black New Orleanians left destitute by Hurricane Katrina were fired on by troops fresh from the killing fields of Iraq.

Governments around the world are expanding their state of emergency laws to encompass climate-related upheavals, perversely facilitating the repression of environmental activists who have been branded as “eco-terrorists” and subjected to counterinsurgency operations. In France, for example, the government applied emergency powers to place dozens of activists under house arrest in advance of the international climate summit in 2015. In Germany, protesters resisting the razing of the ancient Hambach forest for a lignite coal mining project have been met with one of the largest policing operations in the country since World War II.

Migrants fleeing situations of extreme violence and hardship exacerbated by climate change, from Central America to the Middle East, are being locked in cages, stranded in camps, or left to die in the sea by the thousands — while the same arms dealers fueling conflicts in these regions are now also profiting handsomely from securing the borders against them.

Our responses to climate change need to be the exact opposite of war.

Also making a killing are the corporations devising techno-fixes for environmental problems they are in large part responsible for creating, and the investors buying up increasingly scarce resources of land, forests, water and food — while the Indigenous and peasant communities being dispossessed continue to pay the price.

As the U.N. Special Rapporteur on Extreme Poverty warned in a report released on June 25, our world is descending into a “climate apartheid scenario in which the wealthy pay to escape overheating, hunger, and conflict, while the rest of the world is left to suffer.”

Just as in previous wars declared in the name of the social good, such as the war on drugs, the primary casualties are those already most vulnerable and disenfranchised. But rather than breaking this vicious circle, many of the proposed solutions spiral deeper into it instead.

Some have suggested that a future U.S. president could declare a national emergency on climate change: a move that would allow the president to unilaterally invoke up to 136 extraordinary statutory powers that “could be disastrous for our democracy,” in the words of New York University’s Brennan Center for Justice. Others have put their hopes in a greater role for the U.N. Security Council — which would further concentrate decision-making away from the former colonies that have contributed the least to the causes of climate disaster but bear the overwhelming brunt of its effects.

As novelist and activist Arundhati Roy predicted in her recent Arthur Miller Freedom to Write lecture for PEN: “Once again, the Global North, the creators of the problem, will see to it that they profit from the solution that they propose. A solution whose genius will, no doubt, lie deep in the heart of the ‘Market’ and involve more selling and buying, more consuming, and more profiteering by fewer and fewer people.”

War and preparations for war are not only environmentally catastrophic enterprises in their own right — the U.S. military is the largest single consumer of fossil fuels on Earth — but they also represent the apotheosis of the predatory, exploitative, anti-democratic logic that has brought the world to the brink of existential ecological crisis.

Far from needing to be more like war, our responses to climate change need to be the exact opposite of war. They should be less like the elite political and corporate structures profiting from militarism, and more like the grassroots social movements struggling to gain power and keep it where it rightfully belongs: in the hands of the people closest to the pain.

Those on the leading edges of the movement for climate justice are precisely those who have been most socially subjugated and marginalized, especially in times of war: women, children, Indigenous nations, and the communities of the global South. From Standing Rock to Morocco, from Bolivia to Nigeria, people are not only confronting the current crisis but challenging its deep capitalist and colonialist underpinnings. We dishonor these climate protectors by making them part of a war analogy.

The pervasive assumption that taking a problem seriously means treating it like a war shows how militarism has not only captured outsized portions of government spending but has colonized our social imaginations as well. We can’t save a burning planet with the same paradigms that have repeatedly set it on fire.

Medea Benjamin is a co-founder of CODEPINK and the fair trade advocacy group Global Exchange. She is the author of Drone Warfare (OR Books, 2012) and has played an active role in the Green Party. She has a master’s degree in both public health and economics. In 2012, she was awarded the U.S. Peace Memorial Foundation’s Peace Prize. She is also recipient of the 2014 Gandhi Peace Award and the 2010 Martin Luther King, Jr. Peace Prize from the Fellowship of Reconciliation.

MORE BY THIS AUTHOR…

Azeezah Kanji is a legal scholar and writer based in Toronto. She is director of programming at Noor Cultural Centre, and a regular opinion contributor to Canadian and international media on issues relating to racism, law and social justice.

MORE BY THIS AUTHOR…