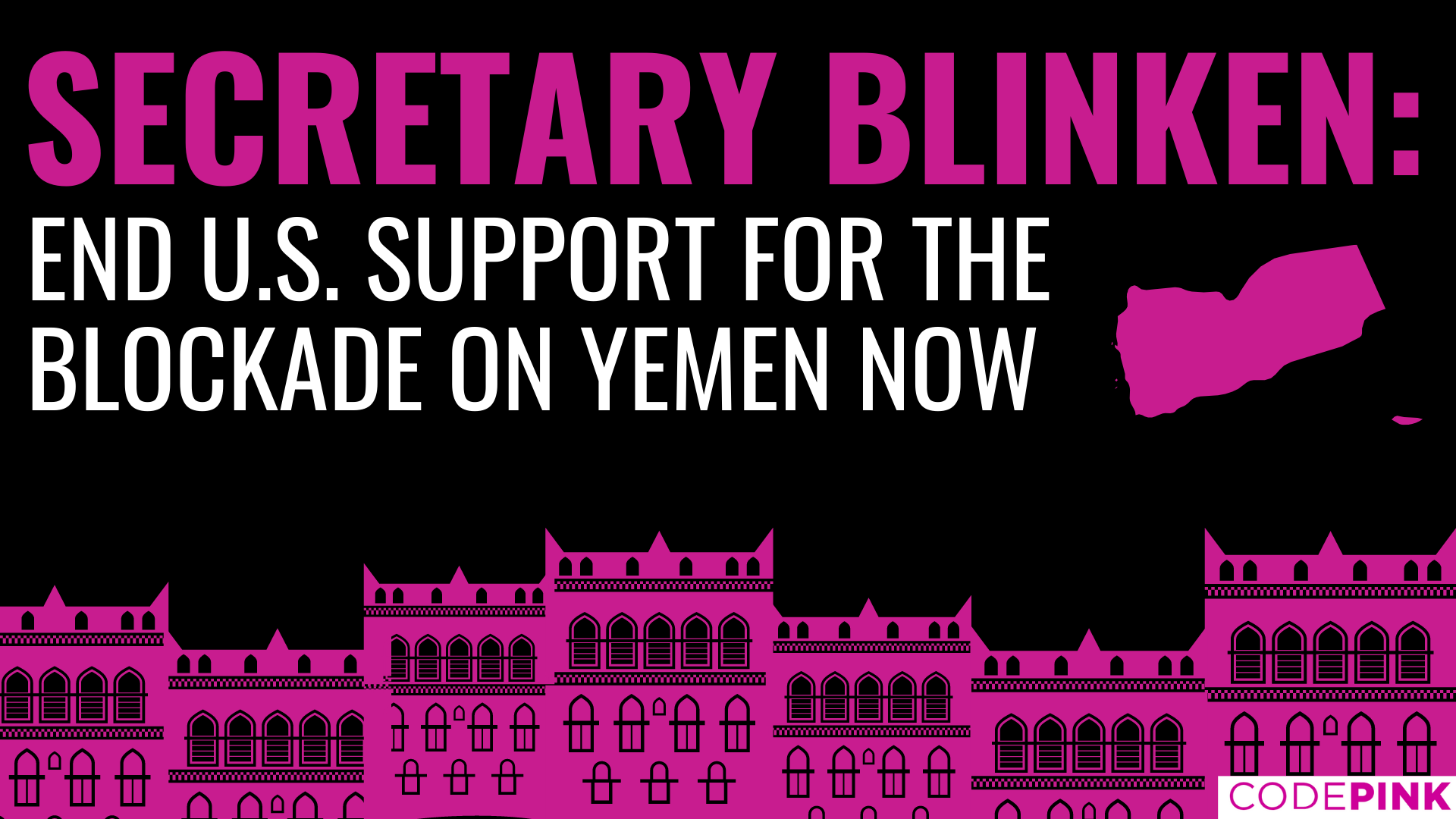 CODEPINK is calling on Secretary Antony Blinken to stop US support for the Saudi blockade on Yemen, and demand that Saudi Arabia lift the blockade immediately.

We, the undersigned, are asking that you halt any US support for the blockade on Yemen and call on Saudi leaders to lift the blockade immediately. Recently, the spokesperson for the State Department has said that what is happening in Yemen is not a blockade, and that the United States does not support it. Both of these things are untrue, and must be corrected immediately.

On March 10th, CNN released a report about the blockade on Yemen. Journalist Nima Elbagir traveled to Hodeidah and saw firsthand what the effects of the blockade were. The report provided evidence of fuel ships being blocked from entering the port of Hodeidah. It also showed the halting of food trucks entering near the port, where food was sitting on the side of the road for weeks going rotten. The fuel ships were blocked for over three months by the Saudi coalition causing a massive fuel crisis which impacted all parts of life in Yemen. CNN showed overcrowded hospitals in Hodeidah, full of malnourished children. The hospitals risk losing power under a fuel shortage. In this report, CNN found that the blockade received support from the United States. They have not been asked to retract such findings, nor have they been challenged formally by the White House.

Shortly after the report, Saudi Arabia “allowed” fuel ships to dock at Hodeidah despite claiming earlier that they were not blocking ships in the first place. If they were not blocking ships, they wouldn’t have had to “allow” ships to dock. The United States has not formally condemned the blockade, and routinely shifts its focus to other aspects of the war. Now, the State Department is denying the blockade even exists. This amounts to diplomatic support for the blockade, and it must be ended immediately.

400,000 Yemeni children under the age of five will die if conditions do not drastically change soon. We call on you to end US support for this blockade, call on Saudi leaders to lift it immediately, and refuse to let Saudi Arabia use the blockade as a bargaining chip in peace negotiations.